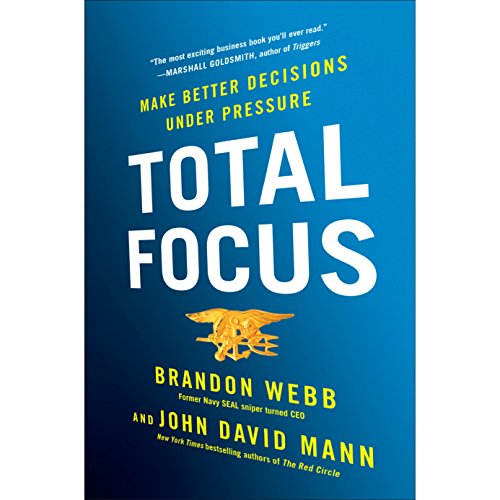 Over his four deployments as a Navy SEAL sniper, Brandon Webb learned all about performing while experiencing heart-pounding stress. After returning to civilian life, he started his first business venture - and failed miserably. He realized that his big mistake was neglecting to apply what he already knew about focus under pressure. By drawing on the lessons of his SEAL training and early business struggles, Webb went on to build a second business, a media network called Hurricane, which today has an audience of millions and a valuation over $100 million.

Now Webb deconstructs the decision-making DNA of the most effective snipers and shows you how to develop the same mental acuity in civilian life. Drawing on stories from his own experiences and those of other Special Operations warriors and great entrepreneurs, like Solomon Choi of 16 Handles, Matt Meeker of BarkBox, and Betsy Morgan of The Huffington Post and TheBlaze, he teaches you how to have total situational awareness to stay out of danger and adapt to changing circumstances, to avoid the trap of overanalysis, and to understand that pain is temporary and learning is priceless.

By following in the path of a generation of legendary snipers, you'll find the clarity of mind you need to make key decisions and accomplish your mission, whatever it takes.

“What an incredible ride! Watching as a former Navy SEAL sniper approaches the challenges and complexities in growing from start-up to $100 million-plus in five short years is a master class in business and leadership.” (David Bach, author of The Automatic Millionaire and Start Late, Finish Rich)

“What do the training, leadership, and entrepreneurial skills of a Navy SEAL have to with running a successful business? As it turns out, just about everything. And you won’t find a better guide and mentor than Brandon Webb, former Navy SEAL sniper turned hugely successful CEO. In Total Focus, Webb and Mann provide a game plan based on the mind-set and skill sets that will result in a business that you’re passionate about, that is lucrative, and that provides extreme value to those you serve.” (Bob Burg, coauthor of The Go-Giver and author of Adversaries into Allies)

“Brandon has done a spectacular job at paying forward proven principles that will help you achieve greatness in your personal and professional lives. I highly recommend this book!” (Jairek Robbins, performance coach, author of Live It!, recipient of the Congressional Award Gold Medal)

I tried my best to get through it. However, the book is nothing more than a biography where the author praises his success. It reads as if the author is pitching his business. A seven hour sales pitch.

I first want to thank Brandon for his service. Navy Seals are bad ass this world would be a lesser place without them.

The book however is a disappointment. Brandon speaks a lot about being laser focused. However,, as the book goes on, and he tells his story, it becomes clear that he is all over the place. Too many ideas and failed plans. Too many sticks in the fire, etc.

I myself am a self made business owner. My current business exceeds 1 million in revenue and has been running for 16 years. So I have some background in the business world. I did not come from a rich family and I started my business from the ground up, by myself.

Brandon, I’m sure is an amazing sniper and seal, and I believe he is trying to help people overcome obstacles in life and business. But be warned that his advice is not spot on and sometimes even wrong.

One example of Brandon’s failure is the small business association. Let me unequivocally state that the SBA does not lend money to small businesses with no capital, period. If you think, as Brandon states, you can just borrow the money, you’re wrong. The SBA is administers through a local bank. They treat us just like any other loan. You need cash or equity or both. The only difference is that the SBA guarantees to cover the bank of you default. Regardless, the bank won’t approve anything if you’re starting out and think you’re going to be the next big thing.

Anyway, if you really like self help books, then go for it. But be warned to not take it for more than it’s worth. It’s like when you go to a seminar and you’re all fired up after the key note speaker. Then an hour later you realize it was all just common sense.

Highly recommended, one of the best books I've ever read or listened to. Must read!

Great read - life will not be the same

I'm glad that I grabbed this book on a whim before reading the comments. Man this guy has a small community that LOVES to hate him. he actually mentions it in the book. I have no knowledge of this ongoing feud but I gained a lot of positive perspective from how Brandon seems to have tackled the issue. The books was a compelling read. I didn't want to put it down. I got the book on audible and I'm looking for a notes companion or else I'll pick up the paperback to copy quotes from, highlight, and reference later.

I'm finding myself quite inspired by Navy Seals turned CEOs. There is a clear connection between successful traits.

What a comprehensive audiobook. Brandon nails it on the heads on the various stages every one should apply in daily life.

it is nothing about focus. it him afverising himself his business and network. A big disapointment

This is a must read for anyone, not just an entrepreneur or business owner - this will help every aspect of life.

“Excellence Matters” - This book is proof of that!

I liked the straightforward, no bullshit approach to business advice that this audiobook delivers. No fluff! Which is a surprise because most business books have a ton.... however, this book definitely delivers something better for a change. Just a no BS, practical approach to teach you lessons based on the author’s catastrophic failures & even bigger successes. Definitely would recommend to anyone looking to become the best version of themselves regardless of what you do in life.

wish I had read 10 years ago. great leasons.. It moves between life , and biz.. I would have loved it to be totally focused on one or the other.

great book for an entrepreneur looking for another resource covering a large range of topics entrepreneurs have to do day in and day out.

Great audio book with very valuable lessions which could be transferes to life and business. Really enjoyed it!

A must read for anybody who want‘s to push a little more in the right direction and need the „what it takes“ advice. One of my Top 3 reads so far.

- Thank you Brandon and John.

Pretty much an autobiography, lacks generalization

The author presents his own (and, in short, some others') business life as a case for the importance of what he understands of focus, that is "front sight focus", "total situational awareness", "violence of action" and elaborates on excellence, learning from failure, team spirit and leadership in further chapters. Unfortunately the whole work pretty much limits itself to convince the listener how important those aspects are rather than offering strategies and models of how to actually implement them.
In addition, all those supposedly telling stories from the military dont appeal to me in the slightest and one common denominator between most of the other cases/"Profiles" seems to be that they cared about their personal gains much more than about their values. I'd personally not dare to describe some of those stories as models for success.