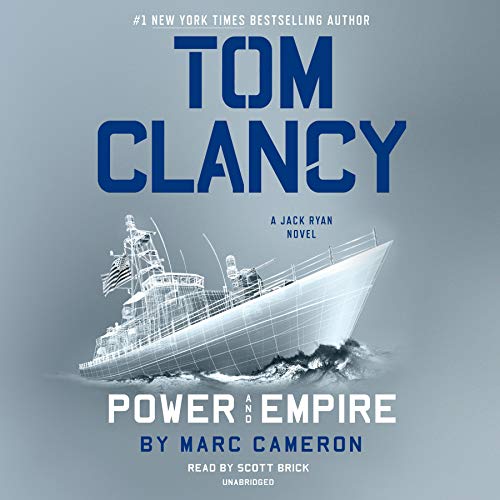 A newly belligerent Chinese government leaves US President Jack Ryan with only a few desperate options in this continuation of the number one New York Times best-selling Tom Clancy series.

Jack Ryan is dealing with an aggressive challenge from the Chinese government. Pawns are being moved around a global chessboard: an attack on an oil platform in Africa, a terrorist strike on an American destroyer, and a storm-tossed American spy ship that may fall into Chinese hands. It seems that President Zhao is determined to limit Ryan's choices in the upcoming G20 negotiations.

But there are hints that there's even more going on behind the scenes. A routine traffic stop in rural Texas leads to a shocking discovery - a link to a Chinese spy who may have intelligence that lays bare an unexpected revelation. John Clark and the members of the Campus are in close pursuit, but can they get the information in time?

The pace and realism of this novel reminds me of Clancy’s work. This is not to say Greaney’s work on the series was not good, it certainly is good reading. But with Cameron I sensed that our heroes are more realistic, limited and vulnerable.

The plot is clever and captured my attention from beginning to end. The characters are familiar, and that is a good thing. There are several new characters I found extremely entertaining.

This is a great choice for early Clancy fans.

Author Marc Cameron's effort writing his first novel in the Jack Ryan series is much, much better than the best effort of Grant Blackwood with Ryan while not being as good as any of Mark Greaney efforts. Cameron the well established author of the outstanding Jericho Quinn series.

What I like most about Power and Empire: (1) It is true to the tradition of Clancy and Greaney in the handling of the characters and (2) John Clark, my favorite Clancy character other than Jack Ryan Sr., may now be an old man but his take no prisoners style is back. What I like least about the novel is that the plot meanders a bit near the midpoint of the novel. Power and Empire is a long and complex novel with many characters which is written more in the style of Tom Clancy himself than of the more compact and concise style of Mark Greaney.

I had some problems in rating this novel; does it deserve 5 stars or 4? Deciding on rating the narration was easy. This is Scott Brick at his very best.

Only thing bad about this Ryan series audiobook is the wait and anticipation for the next release... Tom would be proud to see his beloved characters continue on their journey...

A large part of the story deals with very graphic descriptions of human sex trafficking. It's really difficult to listen to, but I'd hoped that the larger story might make it worth it. I regret that it didn't. Not only is this a poor entry in the Jack Ryan Jr. canon, the sex trafficking makes it intolerable. Even Mr. Brick's excellent recetation can't save this wild miss of a novel.

This is my first Jack Ryan I have read since Mark Greaney stopped writing them, and I was dubious. But I enjoyed it. It was great to have John Clark a bit more involved as in the previous books, I enjoy "the old man". Felt like it was a bit short, I wanted more.
Scott Brick is 5 star, as always!

The tempo and character building were excellent ... then it seemed at the end the author just ran out of ideas. Still, it was an excellent listen and I enjoyed it ... even if the finale seemed rushed.

Being from Dallas this book is very familiar in its location. The subject is very timely for those of us that live in Texas.
Very many believable twist and turn with the right amount of violence!
Well done!

Mark Greaney 's Stories are much more exciting and inspiring than this Author. but the excellent narration of Steve Brick kept the story interesting.

Jack Ryan at his most average

Average. Not the best in the Jack Ryan series. Narrator did a good job .

Not as good as Threat Vector

Both Rainbow Six and Threat Vector are better than this book.

This book is not as original, not as intense, nor as engaging as Threat Vector which has a better plot and more fun to listen.

One of the better new Clancy books. Clark is within his element, and I love this character .

Well that was nothing

The story starts - as expected - slow and detailed builds up with an amazing amount of events and there is a main story but hey at the end you realize it isn't they try to kill the POTUS ah and yes this part of the story comes up in the last pages and is solved within 6 minutes so let's say 10 pages ...wahhh what are you doing? I really concidered that the audio book is broken and a good portion of the book is missing ... honestly I still concidere that

a bit violent but great

the story is a bit violent (John Clark kills almost everybody he meets - and partially in some brutal way), and some of the human trafficking descriptions are very explicit. The end on the other hand is quite “quick”... but apart from those three points a great book with multiple plots in parallel and the whole team involved.