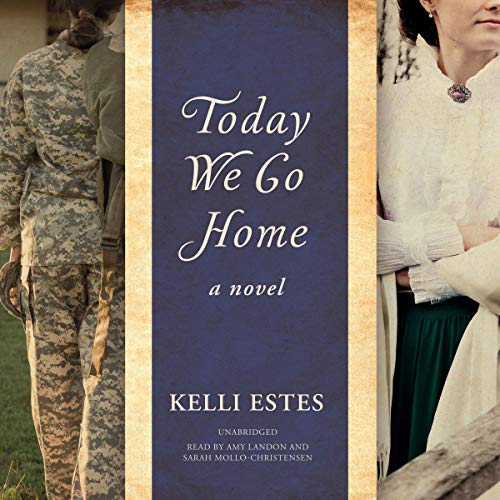 Two women, living centuries apart, fighting for our country's freedom...and their own.

Seattle, Washington: Larkin Bennett has always known her place, whether it's surrounded by her loving family in the lush greenery of the Pacific Northwest, or riding on a dusty convoy in Afghanistan. But all that changed the day tragedy struck her unit and took away everything she held dear. Soon after, Larkin discovers an unexpected treasure: the diary of Emily Wilson, a young woman who disguised herself as a man to fight for the Union in the Civil War. As Larkin struggles to heal, she finds herself drawn deep into Emily's life and the secrets she kept.

Indiana, 1861: The only thing more dangerous to Emily Wilson than a rebel soldier is her own comrades in the Union. But in the minds of her fellow soldiers, if it dresses like a man, swears like a man, and shoots like a man, it must be a man. As the war marches on and takes its terrible toll, Emily begins to question everything she has been told about the freedom she is supposed to be fighting for.

It takes a great deal of skill to successfully intertwine the stories of two characters in different times with different lives. Not since Barbara Michaels/Elizabeth Peters have I come across an author who can craft this kind of tale. I was captured by the story line from the very first chapter...but what pulled me in even more was the way Ms. Estes has infused this book with insight into the challenges that have always been encountered by strong women. The characters are so robust and alive that the reader is taken along for every step of their emotional journey. However, this is not a book with a political agenda and that's where Ms. Estes shines like a beacon in today's world. There's no soapbox here, just a beautifully written story that speaks of facts and truths. Beneath the captivating stories of two women fighting two wars 150 years apart is the elegant and graceful message about the realities of living life as a strong woman. Ms. Estes truly deserves a standing ovation for this book.

As in her awesome first book (The girl who wrote in silk), Kelli Estes gives us a credible glimpse into a little known part of American history. During the Civil War, women who wanted to serve their country had to disguise themselves as men. Woven into the Civil War story is the account of a modern day female soldier struggling to overcome the PTSD brought about by her service. For both women, service came at a cost - as they lost loved ones and pieces of themselves.

Through these two women, Kelli deftly demonstrates how - in both the past and present - women who wish to serve their country are often marginalized and made to feel their roles are secondary to men.

The author does an amazing job describing the historical events. I can only imagine the vast amount of research involved in presenting accounts of Civil War battles and the conditions that existed during those times. Many of the characters are based on actual women who served in the Civil War.

The novel is also about PTSD and the devastating toll it takes on those serving in the military in any generation. If you are a veteran, parts of the story may be difficult, but you may also find some healing through the story. If you know someone who is a veteran, this is a must-read for you.

This was a great book and I highly recommend it.

I had never heard readers; Amy Landon and Sarah Mollo Christensen. Both were quite good.

I loved this story so much. As a wife of a soldier, I can say this story was accurate on all accounts. Normally with dual timelines, I like the historical character best. But in Today We Go Home, Larkin was as real to me as if she was sitting by my side. This is a must read to all women fiction readers. Book clubs will have great discussions over it. Thank you Kellie for yet another wonderful book.

The book is predictable and unbelievably tedious. The best part was the character in the civil war, but you have to trudge through the modern day story as well. The reader constantly reads in an almost whisper, so I could barely hear unless nothing else was happening in the room, even if I had headphones on. She spoke so slowly I listened to it at 2x. I listened to three other books in the span I listened to this one because the story was so slow and I had to convince myself to finish it.

i agree with the point, but i feel likenit was a little heavy handed in how everything was because of this issue. i wish there was more nuance to it and less bludgeoning.

The book was captivating, switching from civil war soldiers to present day soldiers in a poignant heartfelt story. although I know there are still injustices to blacks and women I did feel like it dwelt too much on that. there are injustices at different levels no matter what your gender or skin color. nevertheless I would listen to the book again. the performance was excellent with a very pleasant voice.

I really enjoyed this story and the recognition and support it gave for females in the military and the military in general...Past, Present and Future. well done!

This story is wonderful and I do recommend reading it. The audible narration was hard to take do to monotones and awkward voice inflections and I was not a fan, however I would recommend reading this one from a book.

The story is hard to stop listening to. I kept it on even at work! There is a little language but nothing like other books. I didn’t like how much these women seemed to hate being women. Yet by the end, I see it wasn’t that they hate being women, but hate being treated as inferior. I believe a woman can do anything! I believe that raising children and working with and supporting her husband is massively important! No one else can do that job as well as she can. I hate seeing women feel that this role is inferior to that of being a man. When a woman needs to step out of that role she can do so with honor and can always do any job amazingly! The women in this story are so strong and worthy of being studied. Their stories need to be told. I can’t wait to learn more about them.

Don’t have to tell the audience feminist issues

There was too much explaining of feminist issues. The best feminist education SHOWS the audience not describes the issues.