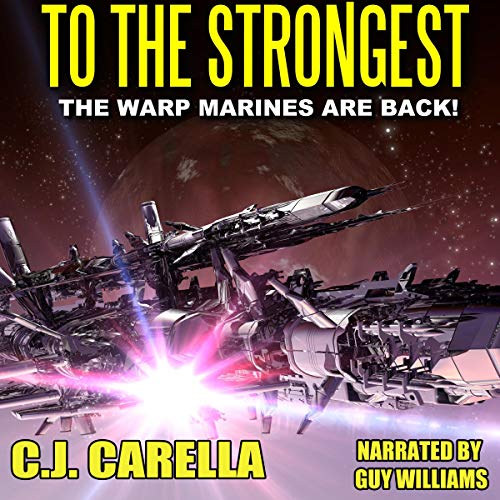 When an ancient foe returns to threaten the known galaxy, the United Stars of America’s Navy and Marines must rise to the occasion and fight the alien invaders to the death. Epic space and land battles against a species of deadly space nomads will determine the fate of humanity.

Jason Giraud: All he wanted was to become a warp marine but the corps wasn’t hiring. When a bizarre accident grants him strange new abilities, however, Jason earns a place in the mysterious and secretive wraith marine regiment. His life will never be the same.

Heather McClintock: She’s back with the CIA, protecting America from foreign enemies. Will her analytic - and telepathic - skills be enough to win the day?

Russell Edison: Retirement did not suit him. Russell returns to his beloved Corps, this time as a Critical Skills Operator instead of a regular infantryman. He soon discovers that Special Ops are even more dangerous than ground-pounder duties.

To The Strongest is the first book of a new series that follows the events of the best-selling warp marine corps series that began with Decisively Engaged.

An Excellent Ending And Beginning

This is the end of Carella’s First Warp Marines ‘first contact/Big War’ novels as well as the first book in a new trilogy with some excellently evil aliens who sound a bit like ..... oops. Well that would spoil it. Let’s just say they’ll give you either heebees or jeebees, and I am really interested in what, exactly, Earth and the remain…(oops, dang!)…the Marines are going to do.
Carella’s attention to real-world detail keeps you engaged, you’re not pulled out of the story every 5 minutes because a Marine just did something that would have gotten him a nice, legal Court Martial and then shot but instead he is “elected” Commander of the Marines. Yah right. Or an oo-rah! every single page. Ugh! Too many authors are so inauthentic!! Not naming names but a little more research, as Carella’s obviously done, would be a nice trend. It makes little errors easy to ignore. Meanwhile there’s the Warp Marines. I hope!