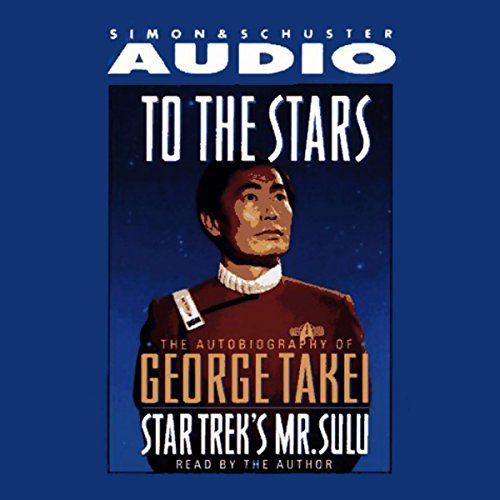 Best known as Mr. Sulu, helmsman of the Starship Enterprise and Captain of the Starship Excelsior, George Takei is beloved by millions as part of the command team that has taken audiences to new vistas of adventure in Star Trek, the unprecedented television and feature film phenomenon.

From the program's birth in the changing world of the 1960s and death at the hands of the network, to its rebirth in the hearts and minds of loyal fans, the Star Trek story has blazed its own path into our recent cultural history, leading to a series of blockbuster feature films and three new versions of Star Trek for television.

The Star Trek story is one of boundless hope and crushing disappointment, wrenching rivalries and incredible achievements. It is also the story of how, after nearly 30 years, the cast of characters from a unique but poorly rated television show have come to be known to millions of Americans and people around the world as family.

For George Takei, the Star Trek adventure is intertwined with his personal odyssey through adversity in which four-year-old George and his family were forced by the United States government into internment camps during World War II.

Star Trek means much more to George Takei than an extraordinary career that has spanned 30 years. For an American whose ideals faced such a severe test, Star Trek represents a shining embodiment of the American Dream, the promise of an optimistic future in which people from all over the world contribute to a common destiny.

Really interesting, and not just for fans of Star Trek. Mr. Takei has a great voice, and a really good attitude. The only downfall is that it is abridged.

This was certainly a good listen. The story was very well written and the narration by Takei was excellent. However I felt that the abridging process made the flow of the book less enjoyable and you get the feeling that there is so much left out from the full version. It keeps you wondering what you have missed. I generally make it a point not to buy abridged books but in this case I had no choice.

To the Stars by a Star

This book is so well written and well narrated. Mr. Takei has the knack to write as if he is talking with you. You feel every bit of emotion that he went through. I definitely recommend it to all.

was glad to hear it read from the author as he has a great voice and added all the appropriate emphasis and mannerisms, but it just seemed short

I wasn't ready for the story to end.

Very interesting, informative and entertaining. Loved the first hand account of his childhood at the Japanese internment camps. George is a very intelligent and diverse and talented man. And of course the Star
Trek saga at its beginning. Only wish the story was longer, I wasn't ready for it to end.

A delightful snack but I want more

Apparently you can only get the 3 hour abridgement in audio book format. It's a deep pleasure to hear Mr Takei narrate his own book but it's a breezy, rapid overview of his life and career with obvious emphasis on his Star Trek experiences. I wish i could hear the unabridged story and more about his diverse productions and more behind the scenes.

Truly an interesting look at the living legend, a must listen for any fan! It is great to hear about the creation and growth of the legendary series.

If you could sum up To The Stars in three words, what would they be?

His mother smuggling a sewing machine

I enjoyed this book. found out some very unsettling things on how unkind people can be to each other simply because of race. Discovered some true wisdom on parenting.

very well read. and written I enjoyed it and listened to its entirety in one day

I just wish it wasn't abridged.

George Takei does a masterful job narrating. But it would be a lot better if the audiobook wasn't abridged.