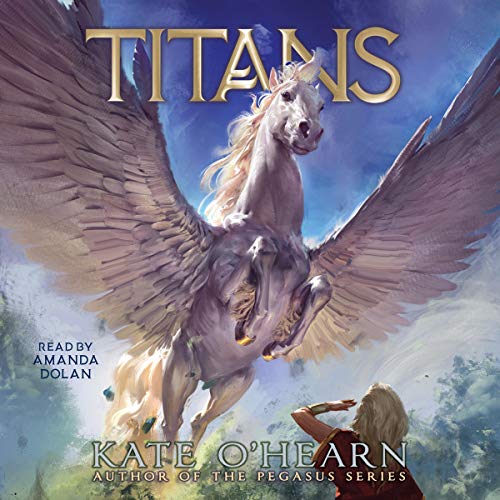 A group of kids must stop invaders before they take over Titus - and the rest of the universe - in this first audiobook in a brand-new series from best-selling Pegasus author Kate O’Hearn, who masterfully blends mystery and mythology together.

Fifteen years ago, Olympus was destroyed, and the Olympians were resettled on Titus. Since then, Earth has been declared a quarantined world. Neither Titans nor Olympians are allowed to visit, and under no circumstances are humans allowed on Titus. The Titans and Olympians are keeping the peace. But the deep-seated mistrust still lingers, so when a human ends up on Titus, he could be the spark that reignites the war....

Astraea is a Titan, granddaughter of Hyperion, and now, a reluctant student at the brand-new school Arcadia. She just knows that it’s going to be awful and that there is no way that Titans and Olympians will ever get along! At least she’s got her best friend, a winged horse named Zephyr, to keep her company. Then the night before the first day of school, Astraea hears her parents discussing something terrifying: A human has been spotted on Titus. But that’s not possible. All routes to Earth via the Solar Stream have been closed - no one can travel between the two worlds...or can they?

When Astraea and Zephyr get detention on their first day - for fighting with a centaur - they’re sent to the orchards to harvest nectar. There, they discover a human boy named Jake. How he got to Titus is a mystery to him and to them. They have to get him home before anyone else discovers him.

But what the trio uncovers is something much bigger than one human boy. It’s a scheme to take down the rulers of this world, conquer it, and then do the same across the galaxy. Can a group of kids stop the invaders? Or is Titus, like Olympus before it, doomed?