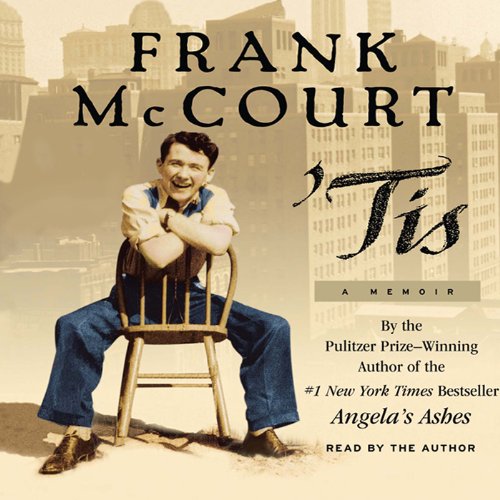 The same vulnerable but invincible spirit that captured our hearts in the Pulitzer Prize-winning memoir Angela's Ashes comes of age in 'Tis.

Listen as Frank tells in his own inimitable voice his story of how at the age of 19 he traveled from Limerick to New York in pursuit of the American dream. Despite the abundance of unsolicited advice he gets to "join the cops" and "stick to his own kind", Frank knows that he should educate himself and somehow rise above his circumstances.

And though he left school at 14, he talks his way into New York University, falls in love with the quintessential Yankee, long-legged and blond, and tries to live his dream. But it is not until he starts to teach - and to write - that Frank finds his place in the world. And for those of us who are lucky enough to come across his writings - and captivating readings - 'Tis a wonderful thing that he did.

I've been a books on tape junkie for a decade but this is my first review.

I like reading customer reviews and just wanted to say that this story totally rocks. I haven't laughed out loud this much with an audio book in years. He's a excellent story teller.

I listened to 'Tis straight through and couldn't wait to get Teacher Man loaded on my Ipod. Frank McCourt has such a way of saying the truth about everything. He says things other people wish they could say. He keeps things simple, real and funny. And that's the way life should be.

Angela's Ashes left me wanting to know what happened to Frank and family and 'Tis answers.

This is the continuation of the autobiography begun in ANGELA'S ASHES, watching the author return to America, navigating through his late adolescence and early adulthood.

Although every bit as delightfully drawn as the first volume, the voice changes into just what one might expect from a boy loose, on his own in New York City, drinking, whoring, surviving a stint in the military, and struggling to find a comfortable place teaching in the NYC public school system.

Be prepared for the change in tone from the one McCourt used in Angela's Ashes. He's raising himself now, from the street up, and his language is peppered with all the color (what my parents would call unnecesary cursing) you might expect from most any young lad his age. If you listen carefully, though, you'll hear the same sensitive heart beating in the story, again masterfully read by McCourt.

Philip of Fort Worth Texas

The previous review by Philip of Ft. Worth Texas shows that the man didn't even read the book. Frank McCourt didn't drown in the bottle. If he did, he wouldn't have been writing the most wonderful memoirs of his life. Frank McCourt rules when it comes to narration. Frank Mccourt can teach us all a thing or two about life. LISTEN TO HIS BOOKS!! There are no better. I guarantee you will not be disappointed.

Excellent reading of a good book

McCourt is an excellent storyteller. Admirable, not too dramatic. You'd love his natural, unexaggerated Irish accent, and his picuresque metaphors. Human and humorous.

'Tis one of my favorites

'Tis is the final chapter of a story begun with Angela's Ashes. In this book Frank McCourt, like many of us, struggled with much of the banality of life. This seemed so more evident in 'Tis than in Angela's Ashes. 'Tis lacks the vivid imagery, the depths of pathos and the unmitigated joy and anticipation of childhood dreams unfulfilled. But McCourt's lilting Irish voice is still there adding to 'Tis that same quality of intimacy and authenticity. By much of 'Tis, McCourt has overcome the real impediments in his life. It doesn't matter that not as much happens in 'Tis. He has made it back to America, after all. (In how many cases do our adult lives measure up to our childhood fantacies, anyway?) 'Tis is the needed punctuation to complete his story. McCourt's often inability to know what to do is only obvious to us because we are viewing from the outside with the benefit of his 20/20 hindsight. If most of us did what McCourt did and penned our own lives as openly and honestly, we would see that in this sense Frank McCourt is truly Everyman.

It is a book that affirms the beauty of being human with all its dreams, hopes, banalities, failures and successes.

This is the best read (listen of the year). Between the tears there is a good laugh and sooo much heart. Never a boring minute.

Frank McCourt continues the narrative of his life begun with "Angela's Ashes." His reading of the book adds a whole new dimension to the printed page, as he mimics the voices and accents of the people he quotes and adopts a slightly bemused and detached tone to some of the darker passages, giving a greater complexity of meaning.
The last quarter of the book reads more like an epilogue. The stories become more fragmented, the character descriptions more circumspect and less insightful. All in all, however, I found the book a good read and difficult to put down. It was almost as good as "Angela's Ashes."

I really like Frank McCourt in spite of everything. I have a soft spot in my heart for anyone who has been through the kinds of things he has endured, and then comes out on top. I didn't love everything about this book, but I am very glad I read it. Being a school teacher myself, I really identified with the struggles he had as a new teacher at a high school. I found myself laughing and crying. If you are inclined to read it, be sure to read Angela's Ashes first.

A bit too much

A fine story, but it would be a even better book if Frank would stop complaining about anything.