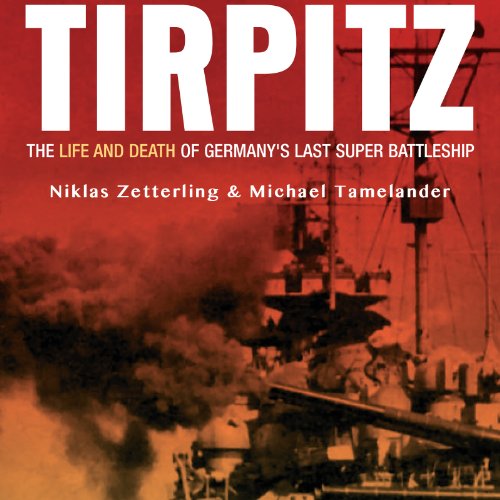 Whilst the Kriegsmarine's surface fleet, restricted for much of the period after 1919 by the terms of the Versailles Treaty, was relatively small in comparison to the Royal Navy, it did possess a number of highly potent battleships and other capital vessels that could - and did - pose a major threat to British interests in the North Atlantic and Arctic Ocean. Amongst the most powerful were the two battleships - the Bismarck and the Tirpitz. The awesome power of the former was demonstrated by its destruction of HMS Hood in May 1941, although it was itself to be sunk shortly afterward. For Royal Navy planners and tacticians, the close monitoring of the other German capital ships was a pressing need, particularly if the Germans were ever to pose a serious threat to the all-important convoys across the Atlantic and to Russia. Moreover considerable effort went into trying to neutralize the threat either by keeping the German warships penned into harbor or by sinking them.

This book uses the great German battleship Tirpitz as the focal point for the story of naval warfare in the North Atlantic in WWII, and does it brilliantly. Much of the book isn't about the Tirpitz per se, although the mighty battleship is like a powerful chess piece lurking in the background—influencing events by its mere existence and deadly possiblities.

Generally, the book focuses on Allied supply convoys in the North Atlantic, bound for both America, and significantly—also for Russia. It reveals the naval strategies and political maneuverings which governed the use of naval resources on both sides of the conflict.
Essential to the story, the book gives a detailed description of "Operation Chariot," the successful attempt by the Allies to destroy the dry dock at St Nazaire in German occupied France.

Overall, this is a thrilling and wonderful book—fascinating from beginning to end.

Furthermore, Pete Larkin's narration is really great. He brings the story to life with clarity and professionalism. His reading style is remarkably consistent from first to last. It's his narration that turns this story of WWII naval strategy into a great and compelling saga.

Sadly, the companion book to "Tirpitz," "Bismarck," by the same authors, is not nearly as well read. Where the narration of "Tirpitz" keeps the action flowing and makes it exciting to listen to, "Bismarck" comes across as stilted and confusing. If nothing else, these two books highlight the huge difference that narration can make.

I would recommend this to anyone who has an inquisitive mind into the full story of the Tirpitz & the role it played in the Arctic convoy battles. This book delivers.

What other book might you compare Tirpitz to and why?

By the same author: "Bismarck: The Final Days of Germany's Greatest Battleship" This book contrasts the other side of the Atlantic convoy battles.

Most definitely the scene where the midget "X" submarines are attempted for a daring attack on the battleship.

The narrator does a superb job of parlaying this historical story. He has excellent inflection throughout the story and was a pleasure to listen to.

One word of note though, this story will tell you more than just about the Tirpitz. It will lay out many historical instances of the Arctic convoy battles and how the Kriegsmarine's role played in that.