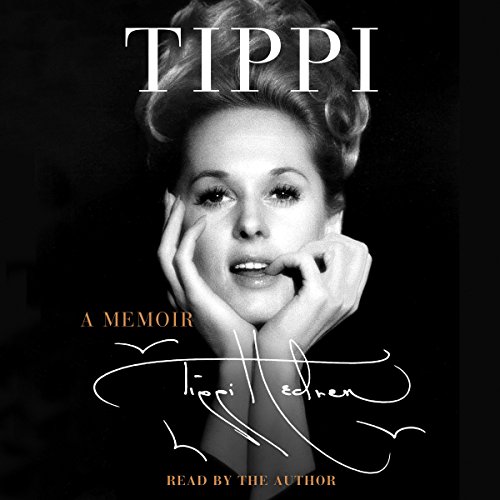 In this absorbing and surprising memoir, one of the biggest names of classic Hollywood - the star of Alfred Hitchcock's The Birds and Marnie - tells her story, including never-before-revealed experiences on the sets of some of the biggest cult films of all time.

For decades Tippi Hedren's luminous beauty radiated from the silver screen, enchanting moviegoers and cementing her position among Hollywood's elite - beauty and star power that continue to endure. For too long Hedren's story has been told by others through whispered gossip and tabloid headlines. Now Hedren sets the record straight, recalling how a young and virtuous Lutheran girl from small-town Minnesota became a worldwide legend as one of the most famous Hitchcock girls, as an unwavering animal activist, and as the matriarch of a powerful Hollywood dynasty that includes her movie star daughter Melanie Griffith and rising star Dakota Johnson, her granddaughter.

For the first time, Hedren digs deep into her complicated relationship with the man who discovered her talent, director Alfred Hitchcock, the benefactor who would become a repulsive and controlling director who contractually controlled her every move. She speaks openly about the dark pain she endured working with him on their most famous collaborations, The Birds and Marnie, and finding the courage she needed to break away.

Hedren's incandescent spirit shines through as she talks about working with the great Charlie Chaplin, sharing the screen with some of the most esteemed actors in Hollywood, her experiences on some of the most intriguing and troubling film sets - including filming Roar, one of the most dangerous movies ever made - and the struggles of being a single mother balancing her dedication to her work and her devotion to her daughter and her commitment to helping animals.

Tippi is a rare and fascinating look at a private woman's remarkable life no celebrity aficionado can miss.

You've got to love lions!

I remember when Tippi Hedren, a total unknown, was selected to be the leading lady in Alfred Hitchcock's THE BIRDS. It caused quite a stir. I also knew that she had some sort of a big cat sanctuary here in California. As a person who works with and advocates for wildlife, I have to admit that I was more interested in learning about the big cats, than I was in anything else, but the whole book was very interesting.

Ms. Hedren narrates the book. She is now 86. I worried a bit about that, but didn't need to. Her narration is fine, and I'm sure adds to the story. I admire anyone who is her age not only writing a book but narrating it as well.

Tippi is totally enjoyable. Ms. Hedren is a real survivor. She has lived quite a life, survived many setbacks, and always bounced back for more. She comes across as very independent. Her work with big cats and other wildlife has been admirable and we in the wildlife community support it.

Good for her for writing this book and sharing her very interesting story.

From the first word, Ms. Hedren had me entranced.
I'd heard the end of a recent NPR Interview that inspired me to purchase this book. Now I am anxiously looking forward to delivery of Roar.
Ms. Hedron's positive attitude is amazing and infectious .. Best of all, readers are privileged to listen to Ms. Hedren read hwr book. Thank you.

Such a classy lady! She has had a very interesting life! Loved it!

I could not stop listening to it and Tippi is such a class act. Just awesome!

A very beautiful, well told story by an amazing and admirable human that I greatly admire

Such a great book about an amazing woman

I loved every minute of this book! Learning all about Tippi’s life was so fascinating. Never a dull moment in this book

I knew nothing about Tippi Hedren I got the audible book because I like memoirs. That was the best choice I ever made. This was the best book I ever read and I’ve read a lot of them. I never knew the incredible life of Tippi Hedren. Her love of animals comes through her voice. I only wish I knew her. I feel like I do know her. I never wanted it to end. She makes you laugh, she makes you smile, she makes you cry. I could not stop listening to this audiobook. I actually love Tippi Hedren now and admire her. I highly highly recommend this book to everyone.

A woman whose physical beauty is matched by the beauty of her heart.

This was such a joy to listen to . Tippi Hedren’s life has been graceful, harrowing, exciting, original, generous and meaningful. Her journey living with the big cats is fascinating and enriching not just for her and the cats but for those who read her story. She unflinchingly recounts many crises and setbacks throughout the years but always retains her bravery and curiosity and wonder of the world and it’s majestic creatures. I always had admired her as an actress but she is so much more as evidenced through reading her memoir.

I Loved it!! Very inspirational! What a classy woman! I couldn't put the book down

Shocking story behind The Birds

Alfred Hitchcock was a disgusting man! As this book by Tippi Hedren reveals, he was the original Harvey Weinstein! Love the audio book, narrated by Tippi herself. She has been through a lot, and has the dirt to dish about her life in Hollywood. Loved it!