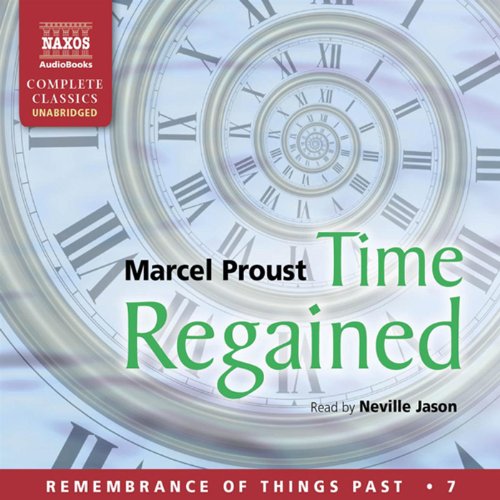 Remembrance of Things Past is one of the monuments of 20th-century literature. Neville Jason’s unabridged recording of the work runs to 150 hours. Time Regained is the final volume.

Lost in the blacked-out streets of Paris during the First World War, Marcel stumbles into a brothel and accidentally witnesses a shocking scene involving the Baron de Charlus. Later, at a reception given by the Prince de Guermates, his meditations on the passage of time lead to his determination to embark on his life's work at last.

Wow, Proust kills it with this last book in his masterpiece In Search of Lost Time. He pulls it all together. I loved Proust's reflections on literary and artistic creation, reality, memory, pain, death and time -- and how in 'Time Regained' he draws all his themes together.

About 2/3 into 'Time Regained' the book started to swarm with emotional, intellectual, and experiential energy. You can feel Proust near a climax. IT is like the last movement of a great classical piece. The book feels like all his themes and fugues are twisting together, increasing in tempo, and taking a firmer shape: page by page, word after word.

I'm almost sad that it is over. There are few books I've ever wanted to start reading/listening to again immediately after finishing. Today as I was setting down 'Time Regained', I almost reached for 'Swann's Way'. I feel like there was so much I missed, whole sections that I just didn't get in the beginning. Gems that dropped between the pages of my cognition.

At the same time, I think that is the essence of Proust: the recognition that in the end, his novel is just us. My same need or desire to go back and read 'In Search of Lost Time' again is similar to my desire to go back into my own past and re-experience my youth with the knowledge I have now. It is a futile, but a very human desire. It is an impulse created by recognizing the expanse and limitations of time and memory. The genius of Proust is his ability to transport the reader to that point where we recognize the art within our own lives at the intersection of our memory and experience.

I'm glad I had the audiobook version to help me pace through this masterpiece.

Would you consider the audio edition of Time Regained to be better than the print version?

Audio and print complement each other. I enjoy both

What was one of the most memorable moments of Time Regained?

Madame Verdurain carrying on about her salons as if the war weren't raging miles away. What an ear Proust has!

Excellent all the way through.

It is terrible that Audible does not see fit to acknowledge the translator of non-English books! Proust wrote in French. Neville Jason reads in impeccable English. Who translated this? There are many translations and all serious readers want to know who has done the work, and when. I have searched high and low at Audible and Naxos and found nothing. A disgrace, if not actionable....

What did you love best about Time Regained?

Hyperaesthesia is an acute sensitivity of body or mind to the world around one and that is what Proust puts into words describing landscapes, room arrangements, music, writing, smells, sounds, personalities, appearances, experiences, time, and just about everything else in his world. The descriptions become digressions but what illuminating wanderings they are and they inevitably eventually lead back to the mainstream as enhancing tributaries, though the fully engaged reader or listener after such a side trip might want to pause to contemplate the eye opening experience or just exclaim what a ride! This book and the previous volumes are in high definition- 100 years before the modern term came into being. .

The coloring in of a depiction what ever it may be.especially the Meseglise and Guermantes ways and the rounded characters who are revealed slowly and often misleadingly, for a time, from the view points of other characters.

What does Neville Jason bring to the story that you wouldn’t experience if you just read the book?

I had read and enjoyed these volumes a few years back and became an audible member to get audible copies of them to listen to as I exercised. Proust can be hard to follow with the convoluted run on sentences but I learned to mostly master these by riding the sentences like a surfer on a wave staying at the crest and going for it, however at times I still confused the characters and who was talking which caused many slowing and soporific read overs. Neville Jason eliminated both bafflement and sleepiness with his deft portrayals.His amazing characterizations were spot on individualizations.

Too many ah ah moments to pick one.

This review is really for the entire work, but what I said in title is true for this book.

yes! So few have read more of "In Search of Lost Time" than "Swan's Way." The full Journey is sublime, and essential for a true appreciation of Proust.

THIS IS ONE OF THE FINEST PERFORMANCES I EVER HAVE HEARD.

GRATITUDE TOWARDS THE AUTHOR AND THE READER.

It all ends too soon and is too short

What can I say?

I dedicated myself a good while ago to completing all seven volumes of In Search of Lost Time. And here I’ve come, all the way through to the conclusion.

I do feel this is one of the finest accomplishments in my life’s literary endeavors. For indeed I strongly believe that this achievement by Proust is very close to the top in all literature, one of the very best and most notable novels ever written.

As I’ve said in reviews of the other six volumes, the use of language is likely the grandest such achievement anywhere and at any time. And the rest of its elements are extraordinary as well.

This seventh episode, while quite good, is not, I believe, the best. Yet, the final third of it reaches high peaks, especially in its consideration of aging and death and the evolution of time that brings us along through the years of life toward the end.

So, though not showing the literary strength of several of the other volumes, this seventh is fine and, obviously, an absolute must to complete.

The decision to give each character a different British accent was a mistake - the audiobook felt too much like an extended episode of Downton Abbey. The subtle and beautiful parts of the novel were lost, and the mannerisms of the members of the Paris salons were exaggerated to the point of farce.

This is The final volume of the best novel ever written, wonderfully well Read by Neville Jason. This is not the latest translation from the French, but I think it is still the best one.

This final book was worth working up to. Magnificent. Well-narrated. Highly recommend this work.
Complex and a slog, but dividends are worth it.

I just reread this series as an older man, having first read it in my early 20s. The first two books of the series I found just as remarkable. In the others, I found that I disliked the Proust, and the society he described, far more than I did when I was young. Proust himself has an ambivalence toward the society he describes, and his own life within it, of course. When I first read the book, my own father dismissed it as "the story of a failed life." I thought then, that my father failed to appreciate the poetry in Proust's writing. Now, I think we both failed to understand Proust's ambition, which he lays out so clearly in the last few pages of this final book.

I think Proust isn't really concerned with the success or failure of his society, or our judgements of his life. I think Proust isn't especially concerned with the poetic quality of his prose, either, except in this: Proust understands that the great strength of poetry is to evoke. And what Proust is trying to do is to evoke a vanished world for us, to capture a vanished time, and to let us dwell in it for awhile, in our time. He is trying to reify, not justify, his life. It's a *remarkable* ambition for a man who accurately calls himself "dissolute".

I think he succeeds best in that ambition with the first two books. I would reccomend anyone to read them, and the second part ot this last book. Is the rest of it worth reading? Only if you have the time.