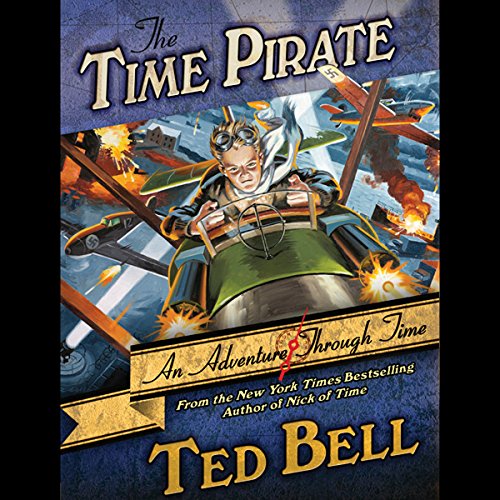 A thrilling sequel to the instant New York Times best seller Nick of Time, in which the young time traveler Nick McIver must prove his courage once more, on two fronts: in World War II-era England, where Nazis have invaded his homeland, and in America during the Revolution, where Nick stands shoulder to shoulder with General George Washington.

It’s 1940 and the Nazis are invading Nick’s beloved home, the British Channel Islands. So Nick takes to the skies: He has discovered an old World War I fighter plane in an abandoned barn. Determined to learn to fly, he is soon risking life and limb to photograph armed German minelayers and patrol boats, and executing incredibly perilous bombing raids over Nazi airfields by night.

Meanwhile, the evil pirate, Captain Billy Blood, still desperate to acquire Nick’s time machine, returns to Greybeard Island. He kidnaps Nick’s sister, Kate, and transports her back to Port Royal, Jamaica, in the year 1781, leaving Nick a message that if he wants to see her alive again, he must come to Jamaica and make an even swap: Kate’s life in exchange for Nick’s wondrous time machine—that’s Blood’s bargain.

Having traveled back in time, Nick discovers a plot that might change the outcome of the American Revolution. Disguised as an 18th-century cabin boy, he travels to the Caribbean and confronts his old enemy, who has assembled the world’s largest pirate armada.

From the battlefields of the New World to the brutal German occupation of English soil in World War II, The Time Pirate has Nick McIver fighting once again to defend his country, with the outcome of two wars resting on his young shoulders.

“Nick of Time takes young readers on a thrilling historical voyage...definitely not for the faint of heart." ( Los Angeles Times)

Ted Bell and his publishers categorize “Time Pirate” as a children’s — or “Young Adult” — book, probably because it has a twelve-year-old protagonist and no sex scenes. I (decidedly not a child or Young Adult) enjoyed both “Time Pirate” and its prequel, “Nick of Time,” very much; however, I do not know whether I would actually recommend this series for youngsters. Nonetheless, I can help you decide, if you are considering purchasing this audiobook for your child. First: if it would discomfit you to have your child ask you the meaning of words like “wench,” and “octaroon,” or phrases like “waterfront dives, brothels, and rum dens,” then perhaps you should withhold the Nick McIver series from your child for the nonce … and listen to it yourself! Second: I do not think that little girls will enjoy the Nick McIver series as much as little boys. (Don’t little boys still like stories about combat and weapons and battles better than little girls? Or am I engaging in outmoded sexist stereotyping?) On the other hand, both “Nick of Time” and “Time Pirate” will teach children of both sexes a lot about history in a fun way. (I sure learned a lot from listening to these two audiobooks!) Ted Bell is a keen history aficionado, specializing in military history. In the Nick McIver series — set, initially, at the beginning of WWII, but then moving back in time — we get to meet Admiral Lord Nelson; Winston Churchill; George and Martha Washington; and (wait for it …) Marie-Joseph Paul Yves Roch Gilbert du Motier, aka: Le Marquis de La Fayette — a French aristocrat who helped Washington win the American Revolutionary War, and who now has almost as many places in the U.S. named after him as does Washington, himself. (Hey, I never knew all that stuff. This is exactly — and exclusively — the way that I want to learn history!)

Whether you are considering purchasing “Time Pirate” for yourself or for your child, I would suggest listening to its prequel, “Nick of Time,” first; since “Time Pirate” continues the story and character development begun in “Nick of Time.” Both audiobooks offer us delightful, fun, highly fanciful-but-entertaining plots, with an excellent narrator.

If you could sum up Time Pirate in three words, what would they be?

Which character – as performed by John Shea – was your favorite?

I laughed out loud more than once

This is aimed at teenagers but I've really enjoyed this and the first Nick McIver story as audiobooks to accompany lots of driving and walking. Sometimes a little farfetched but it's in keeping with the Hawke series just a little younger, good entertainment at any age. Excellent narration by John Shea, nice to keep him for 2 books so far to keep all of the characters consistent. I look forward to the next installment.

What a wonderful story. I read Nick of Time last year and was thrilled to see a sequel had been published. Nick should be voted "boy of the millenium". The author mixies history with fantasy and pulls it off with a real thriller. I am 65 and wish I could go back in time like Nick and his friends....Nick and I would have made a great team. All boys should read this book...even Old Boys like me. This book was a Home Run, Touchdown, and a Slam Dunk..The reader was extraordiary with his inflections, accents and added so much to the story. The dialogue came alive and one could feel the fear, joy and tension. Great job by Mr. Bell and the reader, Mr John Shea. A Plus! In my opinion the sequel was as good as the Nick of Time. Wow! One of my all time favorite books Alan MacKay..Weston, Fl

The Time Pirate by Ted Bell was a wonderful second book in The Nick of Time Adventures. Nick McIver lives in 1940 on the small island of Greybeard Island, where the beginnings of World War II is happening. The Germans are starting the sea attack of the outer islands of Great Britain. If that is not enough to make young Nick's life an adventure, his enemy Captain Billy Blood has come back to take his revenge on Nick by kidnapping his little sister Kate and takes her to 1781. There the pirate is planning a sea attack on France with the largest pirate armada ever seen before. Now Nick must become a trader to his country in 1781 to try to help save his country in 1940's. Meeting one of the greatest Americans of the time General George Washington.
This is a great adventure story for children and adults alike. Nick learns about doing the right thing is not always the easy thing to do. John Shea does a wonderful job with the narration of this story. Giving voices to ever character, making the characters come to life. Both Nick of Time and Time Pirate are well written adventure stories that will take you right in the pages of history.

loved the story. loved how history was weaved within the fiction. I highly recommend this book

Enjoyed the book but why not an adult. A young adult would have e made the unbelievable more believable

I hope there is more to come.

I hope there is more to come. it would be a game for it not to.

Where does Time Pirate rank among all the audiobooks you’ve listened to so far?

I love reading children adventure books. The Time Pirate is a great example of racing adventures with many twists and turns. As bonus is a great look into history at a very personal level. Great fun.

Shea is a crafts man of many voices. Beautiful

I have mixed feelings about this book. In the context of an adventure story that every boy dreams of, Time Pirate is hard to beat. But if consistency within a story and within the historical context it takes place is important to you, Time Pirate falls far short.

Our young hero is resourceful and brave. Great military and political leaders look to him for advice. His foolish exploits always end in success. Victory over the dastardly bad guys is a foregone conclusion. There is not a whiff of nuance or equivocation here.

But he consistently makes decisions that anyone can see are wrong - and those same great leaders do not challenge him. He does not take action that will clearly further his cause, but may eliminate a few chances for excitement in the book. He has intricate detailed knowledge of military battles and maneuvers in some cases and in others does not demonstrate the most basic understanding of the principles of battle.

In once scene, a great military leader passes triumphantly through a town, recognized by every soldier he passes. Moments later, he presses the man he has come to see into keeping his presence a closely guarded secret as knowledge of his presence could ruin great plans. Huh? On the occasions he is captured, he is put into custody with all of his worldly possessions, including firearms, knives and the time traveling orb. This does not make sense even to an eight year old.

But the story does move along and the adventures never stop. John Shea is an excellent narrator for this book although he does exhibit some odd narrative techniques. His pacing is far from steady and some of his voices are caricatures. But, his style seems to work well for this story of pirates, generals, airplanes and ships.