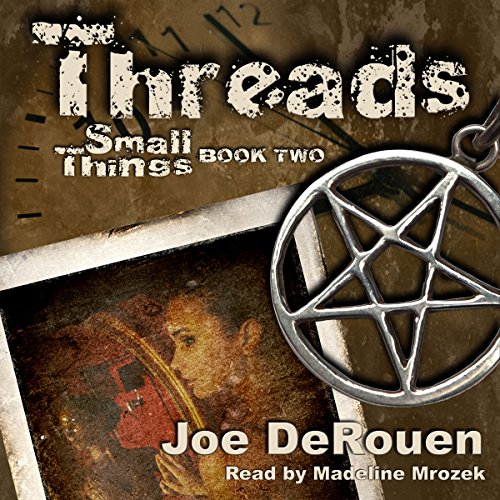 History is changing around 19-year-old Ben Spencer, and he's powerless to stop it. His sister has disappeared, his family thinks he's schizophrenic, and, worse yet, the girl he's madly in love with won't give him the time of day. Enter the mysterious Michael, who, years earlier, helped Ben's parents defeat a powerful sorcerer bent on destroying them and reclaiming a relic stolen from him years before. With Michael's help, Ben will travel back in time, to 1977, and attempt to set the past straight. But will he undo himself and the woman he loves in the process?

The Small Things trilogy spans 40 years and three generations in a tale of murder, betrayal, corruption, sacrifice, love, redemption, faith, and magic that culminates in a showdown that will pit the very forces of heaven and hell against Ben and his family in a battle for the future of mankind and the world itself.

Absorbing. Grabs you by the brain and makes you keep on reading "just another couple of pages, then I'll. ...". Ya, right! Without doing the whole recap thing, the publisher's blurb is somewhat informative without screwing up and giving out spoilers. Neither will I.
The best part for me was getting the audio narrated by Madeline Mrozek! Anytime she is the narrator, it's a good day.

I had purchased the ebook when it was first released, but was given a copy of the audiobook in exchange for an honest review.

Although I had intended on reading this a while ago, life happened and it was placed on the back burner. When I was offered the audio version in exchange for an honest review, I jumped at the chance. I already have the book, so it just gave me an excuse to finally give it a go.

This one takes place in the future, using the kids of the main characters in the first story. Except it also takes place soon after Small Things ended. Also, like the last one, there's a whole paranormal/horror thing going on. But there's also TIME TRAVEL, because why the hell not.

The lead into the story was not as catchy, and it left me confused for a few chapters. That was disappointing to me. But then everything started happening, but at the same time it all came together and I found myself really getting into this story.

There's a mystery going on, and both Ben and Katy are sent to the past to figure it out. And in doing so, they're trying not to screw things up with the past and also there's a whole lot of romantic tension between the two of them.

It was nice to see what happened after the end of the first one, and I found the way it was done to be amusing. In many ways, I liked this one more than the first. And, although this one has a different narrator, I found myself enjoying her as well. I think she really helped the story, especially in the harder to follow bits.

More drama, more mystery, about the same amount of paranormal, plus new characters. I did enjoy this story, and I am looking forward to book 3 more than I was anticipating this one... because this one ended on a gawd damn cliffhanger.

Edge of your seat excitement! Yet again, Joe amazes the reader with his words. Just when you think you have figured out how the story will end, he hits you with a twist.

Joe continues the journey of Small Things. While this is part two the story line can stand alone. His ability to weave a story that makes you feel a part of the story's is wonderful. Madeline does a brilliant job of bringing the story to life.

Great Narrator. Story, not so much