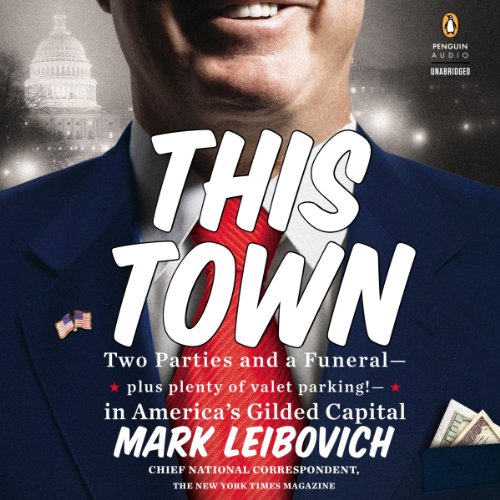 The great thing about Washington is no matter how many elections you lose, how many times you're indicted, how many scandals you've been tainted by, well, the great thing is you can always eat lunch in that town again. What keeps the permanent government spinning on its carousel is the freedom of shamelessness, and that mother's milk of politics, cash.

In Mark Leibovich’s remarkable look at the way things really work in D.C., a funeral for a beloved television star becomes the perfect networking platform, a disgraced political aide can emerge with more power than his boss, campaign losers befriend their vanquishers (and make more money than ever!), "conflict of interest" is a term lost in translation, political reporters are fetishized and worshipped for their ability to get one's name in print, and, well - we're all really friends, aren't we?

What Julia Phillips did for Hollywood, Timothy Crouse did for journalists, and Michael Lewis did for Wall Street, Mark Leibovich does for our nation's capital.

"This Town is funny, it's interesting, and it is demoralizing.... I loved it as much as you can love something which hurts your heart." (John Oliver, The Daily Show with Jon Stewart)

"In addition to his reporting talents, Leibovich is a writer of excellent zest. At times his book is laugh-out-loud (as well as weep-out-loud). He is an exuberant writer, even as his reporting leaves one reaching for Xanax.... [This Town] is vastly entertaining and deeply troubling." (Christopher Buckley, The New York Times Book Review)

"It's been the summer of This Town. What lingers from This Town is what will linger in Washington well after its current dinosaurs are extinct: the political culture owned by big money." (Frank Rich, New York Magazine)

Another case where the author makes his point early, so the later part of the book are examples after we've already been convinced: the Beltway Bubble is far more insular (inbred) than I'd thought ... and I'm a jaded political junkie! An Old Boys' (mostly male, but there are Old Girls, too) Network of overpaid "consultants" living off of the presumed "connections" between lavish parties. Instead of trickle-down, money there circulates laterally.
By the end of the first audio part I'd heard enough, so put the book aside, coming back later, which didn't help. Inside story of a Hill staffer didn't work for me, so I ended up fast-forwarding through much of it. Pace picks up for the final 1/3 or so with a portrait of Hillary Clinton, followed by an analysis of the role of the D. C. press corps in the 2012 campaign ("spin rooms" are a vestigial non-necessity). Romney fans might take offense that their candidate is usually referred by the author as Mittens.

Overall, I found the tales of overpaid has-beens, and wanna-be's,a bit of a downer. Still, I thought it took guts for the author to write so honestly about folks he sees regularly. Recommended, though if you're looking for juicy details, there aren't really a lot. One point that stood out for me was Leibovich's regular mention of Tammy Haddad, a big party thrower (whom I'd not heard of before); seemed almost as though he feared she'd strike him from future guest lists if he didn't talk her up enough?

Says what we already thought, but now with facts

We already have cynical views of perhaps every one of our politicians, particularly those who oppose our personal views.

Now we can rest assured that politicians on "both sides of the aisle" are entirely cynical in their dealings with each other and particularly with the voters.

In today's world, even a terrific loss can be "monetized" to the point that losers such as Generals McChrystal and Petraeus are far better off financially now after being fired from their jobs.

The books is quite humorous, and I highly recommend it.

The amounts of money involved here are extraordinary!

This Town makes me want to change careers!

If you could sum up This Town in three words, what would they be?

I hate to say this, but this book did for me what wall street did for so many back in the 1980s, it made me want to jump into the world he was warning us about! What a great read!

Cheesy, but the voices were great!

If you could give This Town a new subtitle, what would it be?

Prepare yourself for the truth that we always knew, but never wanted to confront.

LISTEN OR READ THIS BOOK, IT IS AWESOME!

Kick the bums OUT! But...to where?

Depressing but not surprising about how things really work in the United STATE of America...:( If you can handle the truth (and perhaps if you're lucky, positively act on it) this title is definitely worth a listen.

One boo-boo in the performance that I have never encountered before in an audiobook: In Part II, Track 4, Chapter 10 of the book is repeated. Kinda threw me for a loop but fast forward to the next track when you get there and the performance moves on to Chapter 11...

Overall this was a good story. Not that many revelations but well a thought out book. Clearly something has went off the tracks in Washington DC, it is also clear that the overriding cause is money and the role it plays in American politics Without regard to Party or philosophical leanings, money has corrupted for the most part everyone engaged in government.

The other major issue as I see it is the press and their decision to walk away from actual reporting so as not to offend the ruling class and their corporate advertising clients. This book touches on this problem. For the most part, authors have been unwilling to point out their own role in the disintegration of American politics.

I'm a person that tries to read at least 4 news papers every day and have been doing so for some time and have witnessed this problem gradually manifest itself. It has been like the example of a frog in a pot of water on the stove. Unfortunately more and more people get their news from Comedy Central rather than the 6 PM news. Part of this has to do with the shot callers at networks and Editors of newspapers promoting news casters and print journalist based on reasons other than their journalistic ability. This has resulted in the dumbing down of content, I'm not sure if this is done for the audience or the walking haircuts now considered journalist. Another factor has been sites like Politico that turns politics into a celebrity game show like US or People is for movie stars. Politics should be treated different than Hollywood. The author does just that in this book and that is why I am recommending it.

Would I recommend it? yes

Would you be willing to try another book from Mark Leibovich? Why or why not?

Yes, I thought he was good author.

Did This Town inspire you to do anything?

It actually made me more despondent in regards to the ruling elites of both Parties.

This was my first Audible book. The presenter did a great job but I still like books better for some reason.

Ok yes, it's a little bit dishy and gossipy--that's how you get a book published--but I get the sense Leibovich--an intrenched NYT correspondent-- pretty much burned his bridges to write some of the stuff that's in here.
I downloaded this the day it came out and am honestly astonished there hasn't been more outrage. Seems like Leibovich is trying to make an important point, but obviously the majority of readers are missing it. (Maybe because they're all trying to figure out if they're in the book, or know someone who is?)

I've long talked others in DC who confirm what he's saying . The ruling class in DC is cashing out and "riding it down in style". In other words, they know the plane is going to crash, but not in their lifetime...hopefully...so, yeah, whatever.

Please listen to this book. Yes, its very funny and entertaining--Leibovich is skilled writer--but it also reveals a capital that every US citizen should be aware of.

Why don't things seem to work in America any more? The author, a Washington insider, dishes on his friends and sources to provide this glimpse into the world of the privileged charged with the people's business. He reveals specifics of their concern with image, connection and fortune while ignoring the fate of our nation.

the wolf of insignificance is at the door

have you spent significant time in washington DC ?
do the inner workings of politics just fascinate you ?
do you have a greater tolerance for gossip than your classmates ?

if so, this might be a very good book for you
if not, you might find the book insular and a bit repetitive
it's basically a prolonged and chatty lesson on human nature

in 1975, 3 % of former congressmen became lobbyists
in today's washington DC, the number has risen to about 40 %
mr. leibovich would like to tell us just how that transition occurred

those in political power are a sad but predictable bunch of people
p.j. o'rourke's book " parliament of whores " outlined them clearly
it's those next to power that are an even sadder, clumsier group

the press corp, legislative aides and socialites all buzz around DC
they all lack the power and leverage that money or electability brings
so they traffic in the only commodity left to them : relationships

mr. o'rourke's effective book commented on DC from the outside
sadly, mr. leibovich tries to the same from " inside the machine "
it's a difficult task since the reader can often questions his motives

can mr. leibovich remain next to power without actually having power ?
will all of his efforts keep the wolf of insignificance away from the door ?
niccolo machiavelli would say no and he's probably right

There are already three parties in Washington, D.C

I was really looking forward to this insider's glimpse into the gossip, games, and politics of Washington DC.

Unfortunately the stories told are so bland that they hardly are interesting.

Maybe it's true that "Washington is Hollywood for ugly people" but these people are hardly interesting.

Was genau hat Sie an This Town enttäuscht?