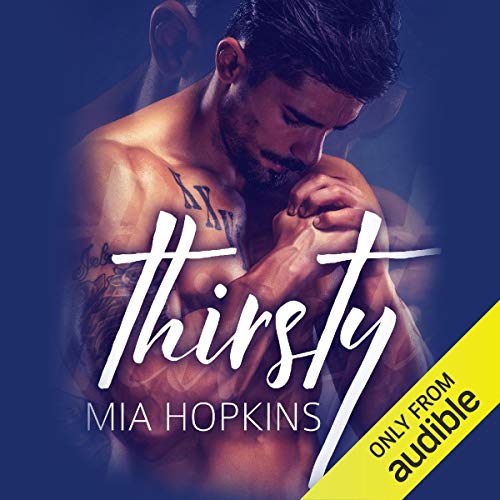 A gangster hiding from his past. A single mom fighting for her future. Can she show this bad boy the man he's meant to be?

"Mia Hopkins is an imaginative author who doesn't take the easy road to a formulaic book." (USA Today's Happy Ever After blog)

My name is Salvador Rosas. Back in the barrio, my past is written on the walls: ESHB. Short for East Side Hollenbeck, my father's gang - my gang. Hell, it's a family tradition, one that sent both my brothers away. They used to call me "Ghost" because I haunted people's dreams. Now I've got nothing going for me except a hipster gringo mentoring me in a new career. An ex-con making craft beer? No mames. Still, people in this neighborhood look out for one another.

That's how I became Vanessa Velasco's unwelcome tenant. Chiquita pero picosa. She's little, but with curves so sweet they're dangerous. I remember Vanessa from the old days, the straight-A student with big plans. Plans that were derailed by another kid stupid enough to think he was bulletproof. Now Vanessa knows better than to believe in empty promises. There's fire in her...and if I touch her, I might get burned.

I'm trying everything I can to go straight. But when East Side Hollenbeck comes calling, I might have to risk it all to find out if there's a future for Vanessa and me. Because she's the only one who can quench my thirst for something real.

The Rosas brothers will return in Trashed!

“ Thirsty is a sizzling, emotionally intense story that is both gritty and heartwarming, an addictive page-turner that will stay with me for a long time to come.” ( New York Times best-selling author Cathryn Fox)
“ Thirsty is sexy and soul-wrenching, with Sal’s irresistible voice luring you through a living, breathing Los Angeles. Vanessa and Sal’s chemistry sizzles right off the page. Five smoldering, tattooed stars!” ( USA Today best-selling author Sierra Simone)
“ Thirsty is an amazing read! I stayed up way too late to finish and haven’t stopped thinking about the characters. Highly recommended!” ( USA Today best-selling author Molly O’Keefe)

This was an eye opening lesson. To often society dehumanizes and judges unfairly those whom participate in gang lifestyles. Its unfamiliar and we can’t understand and it frightens us. Salvador has been out of prison just 6 months when this starts. He’s pretty much homeless and struggling to get his feet under him. He is trying to avoid notice and recall to his gang. But he hasn’t figured out just how he’s gonna go about that. As he was approached in his early teens and bullied into a lifestyle he didn’t fully understand the ramifications of. And there is no leaving, it’s not done. This story is not violent there is minimal crime or fighting. It’s more the internal war Salvador is struggling with the anxiety and indecision and fear. The worst was the hopelessness he felt. If I’m taking a hurt friend to the hospital it’s mostly an injury earned while having fun. When I fall short at work my coworkers won’t come at me with fists and knives and guns. When I decided to quit my job my boss won’t put out a kill order for me or my family. The pressure is enormous. The trap solid. I don’t want to give spoilers out but Vanessa and Sal’s love story is adorable if that can be said of a gangster and a woman strong enough to love him. The supporting characters around them are colorful and many helped add laughter and hope to the story. I really enjoyed this MH has mad skills and OR did an awesome job voicing Sal. I’m looking forward to the next in the series.

This book gave me all the feels. So much heart and well developed characters. And steamy sex. And danger. And a crazy dog. And a feisty abuela. Narrator was the dreamiest.

What a breath of fresh air

I was looking for a sexy romance novel that was not about rich white people bc tbh they all just kind of run together in my head anymore. And I was also looking for a book that had characters who were worth caring about, that would make me feel something....This book f**king delivered. Can’t wait to dig in to the next one!

A bit traumatic but ultimately hopeful

A reminder of how much luck & the kindness of strangers is key to survival. Even more so in tense situations like Sal finds himself in. Being a parolee from a gang he can’t quit makes Sal’s life tense. Somehow, he figures out how to be good at cleaning up after himself & sex. He winds up being a convenient release for his landlady, Vanessa, who is also trying to regain ground ceded to teenaged decisions. Sal is living three separate lives - one with his bew girlfriend’s family, one with his new work friends, and one with/without his old gang. Navigating these varied relationships is not smooth sailing but our plucky hero keeps on keeping on … and learns to brew beer.

I saw this book on the audible website and I thought I would give it a try.

I was sucked in to these characters. I loved Sal and I felt his pain. I wanted to make it better for him. I hate that he was so torn in what to do. He wanted to do the right thing but that right thing isn’t so easy for a gang member when the gang wants you back.

He has a hard choice to make.

He is turning his life around, working 2 jobs to make a better life for himself and his brother when his brother is to be released from jail.

Ahh but he gets his heart snagged by a girl and not just any girl a Vanessa a girl from the same neighbourhood so she knows all about him and his ways.

But she too falls for him too. I do wish she as a little more understanding in the end but I get it she was trying to protect her daughter.

I really loved the narration someone who actually sounds like they know the language, I truly don’t like when they pick narrators who don’t fit the stories. This one does <3.

This had been on my TBR list for a while and I kept putting it off. Had some spare Credits and decided, why not?

So glad I did! This story was so real and moving. It was refreshing and insightful to get Sal's POV throughout the story and his emotional turmoil. The narrator was fantastic and gave depth to the story.
In short I loved this book and look forward to the next.

I couldn't sleep and started this book. It was a very good insomniac decision. I love Sal and I love his story. Hopkins handled the PTSD of gang relations and imprisonment with such care and consideration. While I thought I wasn't going to enjoy being in Sal's head it really brought to light the helpless that occurs when you don't think you have options. I loved this book so much.

This story felt so real.

I enjoyed the realness of this story. The narrator sounded like he was Sal! It wasn’t extra and it wasn’t glorifying gang life. It was just a story Sal aka Ghost trying to build his life back after a 5 year stint in prison for gang related crimes.

Vanessa was a good heroine. She was smart enough to keep her eyes open when dealing with Sal and she held him accountable.

I enjoyed this story.

This book was excellent, well written, and brought back to memory the barrios mi amigos grew up in. The reader did an excellent job bringing to life the character. His life trials, choices, and successes are truly an inspiration. Thank you for writing a true to heart book with Mexican flare about life in the neighborhood.

eye opening in a way. rooting for Gost. excelent naration. too bad next in this is not narated by oscar