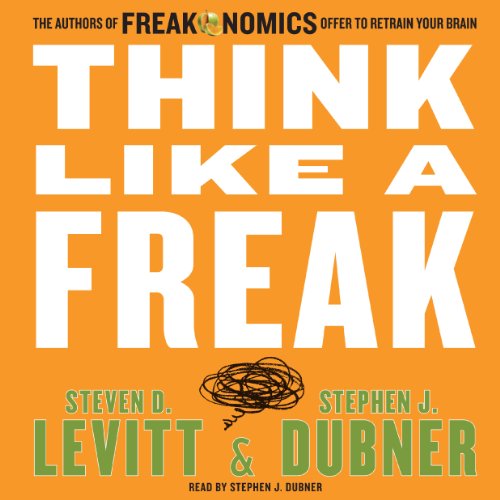 The New York Times bestselling Freakonomics changed the way we see the world, exposing the hidden side of just about everything.

Now, with Think Like a Freak, Steven D. Levitt and Stephen J. Dubner have written their most revolutionary book yet. With their trademark blend of captivating storytelling and unconventional analysis, they take us inside their thought process and offer a blueprint for an entirely new way to solve problems. The topics range from business to philanthropy to sports to politics, all with the goal of retraining your brain. Along the way, you’ll learn the secrets of a Japanese hot-dog-eating champion, the reason an Australian doctor swallowed a batch of dangerous bacteria, and why Nigerian e-mail scammers make a point of saying they’re from Nigeria.

Levitt and Dubner plainly see the world like no one else. Now you can too. Never before have such iconoclastic thinkers been so revealing—and so much fun to read.

Steven D. Levitt, a professor of economics at the University of Chicago, was awarded the John Bates Clark medal, given to the most influential American economist under the age of forty.

Stephen J. Dubner, an award-winning journalist and radio and TV personality, has worked for The New York Times and published three non-Freakonomics books.

I've been following the Freaks for a while, so I was excited to get this audiobook and tear through it. But there was little in here that I hadn't heard in their previous books or on their podcast. Nearly everything they mentioned sounded very familiar.

The book was also extremely short, but supplemented by several podcasts at the end to artificially inflate the length. I'm tempted to ask audible for my money back. I wouldn't have spent an audible credit on such a short bit of entertainment. I could have put this credit towards a 47 hour Stephen King book and gotten waaaaaaaay more for my dollar.

I like the authors and their style, but this purchase was misleading and lacking in substance.

Not a good trend

This is the second book this month that I've bought that has had podcast content tacked onto the end. This inflates the running time and makes you think you're getting more than you actually are. Any book that does this gets an immediate 1 star across the board. False advertising...

If I were not a subscriber to the Freakonomics podcast I would give this a 4.5 star rating, but as I listened to the book I realized that much of it had been trotted out on the podcast. The book is one credit. The podcast is free. Where's the economics in that?

Only if you don't listen to the podcast.....

If you follow and listen to the almost weekly podcasts you will have heard pretty much all of this material already. I really like what these guys do, but I felt duped for buying this audio book. If you have not listened to any podcasts you will like it.

If you’ve listened to books by Steven D. Levitt and Stephen J. Dubner before, how does this one compare?

Again, this was really a remake of prior materials.

The delivery was fine.

I loved Freakonomics, liked Superfreakonomics and have listened to every podcast they have ever put out. So I was excited for their next offering. Sadly, about 80% of this book is recycled from the podcast.

Dubner's narration is excellent as always.

Heard it all before

What could Steven D. Levitt and Stephen J. Dubner have done to make this a more enjoyable book for you?

Everything in this book was great the first time I heard it, but if you have listened to the podcasts or the other books its pretty much the same.

Who would you have cast as narrator instead of Stephen J. Dubner?

SD is a great narrator, its just old content.

Too much here from the podcast

Big fan of the podcast, but there was too much regurgitated that I'd already heard.

Many stories which seemed manipulated or forced to illustrate points some vaguely articulated. Also, some of the stories made longer than needed.

What was most disappointing about Steven D. Levitt and Stephen J. Dubner ’s story?

The gap between what the book offers and what it delivers. Over promises and under delivers. The message of thinking like a freak is not actually accomplished. It is another compilation of studies like previous editions but this one much worse with no element of novelty. Many cliches.

What didn’t you like about Stephen J. Dubner’s performance?

It was average. Sometimes got monotonous.

If you could play editor, what scene or scenes would you have cut from Think Like a Freak?

I would cut or combine some chapters.

The first books made an impression that this book tried to leverage. Unfortunately, it did not do it.

If you like their other books "Freakonomics" and "SuperFreakonomics," you'll like this one. However, if you've listened to the Freakonomics podcasts, most of the topics have already been covered. Since the podcasts are free, I don't mind paying for the book and reading the few additional topics and stories that weren't covered.

Short and Engrossing: Ideal for non-fiction

Where does Think Like a Freak rank among all the audiobooks you’ve listened to so far?

Daniel Pink - Drive.
Rooted in behavior economics, but told as a compelling narrative, this is easy to follow and encourages a healthy shift in perspective.

Which character – as performed by Stephen J. Dubner – was your favorite?

No characters, but Dubner is a clear and engaging reader.

1. Test assumptions, because accepted knowledge is often myth.
2. Tell a story, putting narrative above criticism.
3. Be willing to quit and move on, regardless of investment.

"Think Like A Freak" is the kind of book you want to read in high school. It encourages readers to think more deeply about the world. About the presumptions everyone makes. And the authority of experts. It is not a self-help book, but those able to engrain it's central values may find life to be a little more fulfilling.

If you enjoy Freakonomics or you just want to affirm the limits of human intuition, pick up a copy.

Note on length: It's less than 6 hours. The end has been padded out with 3 episodes of the Freakonomics podcasts. A good introduction to them, for sure, but still offsetting when a book ends with 90 minutes remaining in Audible.