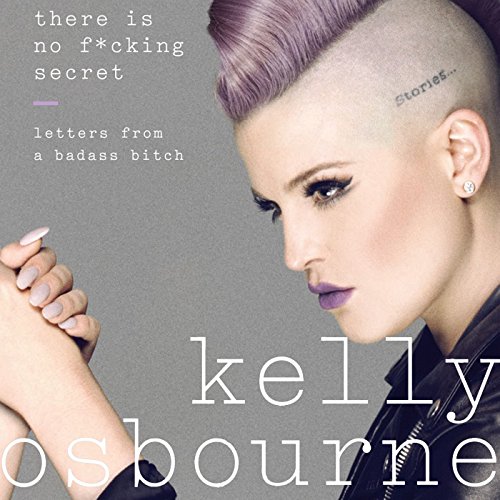 There Is No F--king Secret

There Is No F--king Secret

People ask Kelly Osbourne all the time: "What's your secret?"

Kelly Osbourne may not always have been a typical role model, but no one can say that her perspective isn't hard won after spending three decades in the spotlight: from growing up completely exposed to the heavy metal scene - replete with crazy antics most listeners have only begun to hear about - to spending her teenage years as the wild middle child of an even wilder Ozzy Osbourne, to the family's popular stint on their wacky eponymous reality show. Since then Osbourne has forged her own path as a style icon and powerful woman in the media who isn't afraid to tell it like it is and be honest with her fans. But being the daughter of a music legend hasn't always been glamorous; growing up Osbourne is an experience that Kelly wouldn't trade, but there are battle scars, and she is finally now ready to embrace and reveal their origins.

Told as a series of letters to various people and places in her life, There Is No F--king Secret gives listeners an intimate look at the stories and influences that have shaped Osbourne's highly speculated-about life, for better or for worse. The stories will make listeners' jaws drop, but ultimately they will come away empowered to forge their own paths to confidence, no matter how deranged and out of control they may be, and to learn the ultimate lesson: that there just is no f--king secret.

This is an amazing audiobook. I purchased it yesterday and I just finished it! She is so easy to listen to and is relatable. I learned a lot and I literally laughed my ass off. Between her one liners, side commentary and profanity to her heartfelt messages and advice. This is an excellent and well written book. I'm inspired and have a lot of respect for Kelly O.

I just purchased this book yesterday and I am already finished. honestly... I'd be lying if I didn't admit to you that in the beginning I thought this was just going to be a book where Kelly Osbourne tells us about what it was like growing up in the spotlight and having Ozzy Osbourne for a father and Sharon Osbourne as a mother. I thought we would hear about her struggle with drugs but I thought we would only hear The Shining good things I never thought she would open up and tell us her truth... I was very wrong thank you Kelly Osbourne for being open and honest through every single page of this book my amount of respect for you has grown tremendously!! If you are just looking to hear about all the fun times growing up in Hollywood... Then know you probably wouldn't make it through this book because that is a very small part of Kelly Osbourne story. But if you genuinely want to know about Kelly Osbourne as a person and the places she has gone throughout her life the things she has done good and bad and what she has learned from her life situations. Then you should definitely watch this book. I have read quite a few books that were Memoirs or autobiographies but I have to say this was the first one that I feel has given us a true look inside the life of the person it is written about... Well in this case the life of the person who wrote it. Thank you Kelly... Thank you for being open and being Who You Are. You give me strength that I didn't know I had.

What did you love best about There Is No F--king Secret?

I love how brutally honest Kelly Osbourne is and I love that she is the one to narrate this book because no one could do it justice like she can.

What does Kelly Osbourne bring to the story that you wouldn’t experience if you just read the book?

It makes you feel as though you are talking to a friend instead of reading a book, also you can hear in her voice just how these things have affected her as a person.

If I could have I would have

You MUST pick this book up it is well worth it

Big fan of Kelly but not this book

I'm very disappointed with this point. I did a lot of fast forwarded and at times didn't want to finish it.

I wasn't looking for a "self-help" book, but Kelly's advice and stories were inspirational. She gave advice I needed to hear. I recommend this book to any young adult woman.

While on my lunch break, I saw a US Weekly magazine with Kelly Osborne on the cover. In the magazine she was promoting her new book.

That article spoke to me and I knew immediately I had to own it. I opted for the Audible version vs the book because Kelly is telling her journey in her own words.

I honestly love this book. I have several people in my family who have suffered from addiction, some of those who have list their lives from it.

Kelly is telling her journey and how she overcame her past. She genuinely seems like a down to earth person and someone you would want to be in your corner.

Thank you Kelly O. for sharing your story.

I laughed; I cried

Kelly delivers such inspiration & snarky humor in this account of her life experiences and the wisdom she's gained from it. I loved every minute of it!

This book very very enjoyable being narrated by the author. I truly enjoyed her openness and could visualize her struggles. Having listened to this makes me feel as if I understand her, and would love to have a cup f tea with her and get to know her better. Keep hanging tough KO.

Lots of secrets. Names excluded, events not talked about. All in all it's a woman's book that talks more about make up, clothes, and weight more than about her life. (Which is the reason I bought the book) if you want to hear about being over weight, dieting, make up, and clothes this is the book for you. If not, do not get it.

Growing up is not easy

If you could sum up There Is No F--king Secret in three words, what would they be?

What other book might you compare There Is No F--king Secret to and why?

Which character – as performed by Kelly Osbourne – was your favorite?

Tales of a lavender Lass

The book was actually very well done, however I did not feel a whole chapter on her hair,vagina and fashion was needed. I wanted more about her relationship with Joan and her mother. Some more insite into her failed engagement. I will say she's nothing like I exspected her to be.