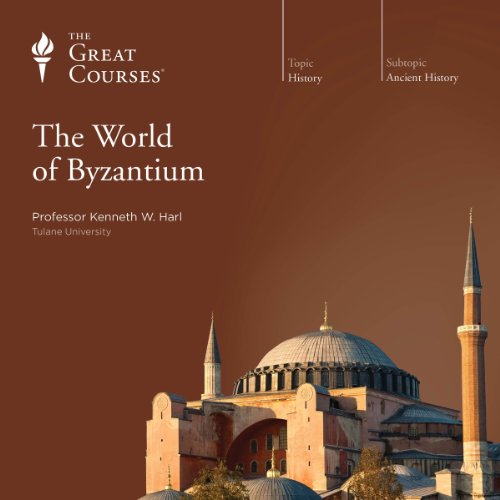 The World of Byzantium

Byzantium is too-often considered merely the "Eastern rump" of the old Roman Empire, a curious and even unsettling mix of the classical and medieval. Yet it was, according to Professor Harl, "without a doubt the greatest state in Christendom through much of the Middle Ages," and well worth our attention as a way to widen our perspective on everything from the decline of imperial Rome to the rise of the Renaissance.

In a series of 24 tellingly detailed lectures, you'll learn how the Greek-speaking empire of Byzantium, or East Rome, occupied a crucial place in both time and space that began with Constantine the Great and endured for more than a millennium - a crucible where peoples, cultures, and ideas met and melded to create a world at once Eastern and Western, Greek and Latin, classical and Christian. And you'll be dazzled by the achievements of Byzantium's emperors, patriarchs, priests, monks, artists, architects, scholars, soldiers, and officials

If you could sum up The World of Byzantium in three words, what would they be?

What other book might you compare The World of Byzantium to and why?

It's a lecture series, so this isn't very relevant.

Have you listened to any of Professor Kenneth W. Harl’s other performances before? How does this one compare?

This is a good survey, which does a nice job of placing Byzantium in the context of more familiar and popular historical themes-- emergence of the Renaissance, the rise of the Ottoman Empire, the decline of the Western Roman Empire, humanism. Harl is a good scholar and an interesting and occasionally amusing lecturer. If you have an interest in knowing the basics, this is a worth listen.

Traditional History at it's Best

I have listened to Professor Kenneth J. Harl many times and have never been disappointed. He delivers the traditional historical experience at its best.

This series of lectures covers the origins of the Byzantine Empire (or East Roman Empire) from its background and foundations in the late Roman Empire and its birth through the dynamic personality of Emperor Constantine the Great around 300 AD. It then provides an overview of that history right down to the empires final collapse in the epic and moving siege and fall of the city of Constantinople to it's Ottoman Turkic attackers in 1453 AD.

Those who are looking for an in-depth treatment of the topic should probably find a more thorough book to read. Those who are interested in getting an overview of the topic and enjoy listening to history will not be disappointed.

5 stars for many aspects that were both well-conceived and well-executed. If you knew you were missing from your American education vital components of classical and antique history - because the Byzantine empire was glossed over - you came to the correct lecture set. The professor seems to have made it a mission to speak at the equivalent of 90 (substantive) words a minute, so get ready to pause and reverse innumerable times. I view that as a mark of quality, and think many would agree. Also has stimulated the need to dive into other sources, and maybe the one criticism i would make is that prof did seems not to have felt the need to cite sources as much as he should have- academic arrogance might be the culprit. If so, again, quality overall outweigheth.

Professor Harl is always a mixed bag for me. I absolutely love the topics he lectures on and they always rope me in. He is also an encyclopedia of knowledge and offers ample opportunities to learn something new in each of his lectures. The problem has always been him conveying this information/knowledge in a format/style that makes the listening experience enjoyable. While I can overlook the massive number of filler words ("umm", "uhh", etc.), it is hard to get used to a style in which he throws so much at you, so fast and hopping around from topic to topic, geographic area to geographic area that your head is left spinning trying to remember the main point.

The good: The professor provides some good political/military historical narrative on the late Roman Empire and its successor in the East: the Byzantine Empire from aprx. 200 AD to aprx. 1453 AD.

The bad:
• A good number of the lectures were just not that interesting and did not kept my attention (especially those on Christianity which to me are usually fascinating discussions; In this case he just couldn't pull it all together in a consumable manner to make his points)
• The professor covered important topics or events in a very quick/rapid-fire style leading to a lot of rewinding and re-listening to ensure I got the point; Would’ve liked it if he slowed down and focused on just one topic or event at a time and maybe provided more analysis on it; He loves to connect areas of the map and events with other events but does so in way too fast a fashion leaving you disoriented

If you have taken his other courses such as "The Ottoman Empire" or "The Era of the Crusades" you will find alot of the same material in this course.

The reaosn why I bought this course was because I was so intrigued with his lectures on the Byzantine Empire in "The Era of the Crusades" that I thought this course would really whett my appetite on more Byzantine history. Unfortunately, it just did not deliver in that respect.

Another piece of the puzzle

Where does The World of Byzantium rank among all the audiobooks you’ve listened to so far?

WB ranks among the top. Dr. Harl provides another piece of the puzzle addressing the question of our relationship with the Middle East and Russia

Have you listened to any of Professor Kenneth W. Harl’s other performances before? How does this one compare?

No - will try another soon.

No - it was quite long. It was in two parts.

Beginning to Fill Yet Another Gap in My Education

Professor Harl kicks off with an observation that my own experience bears out: history courses focus on Greece, then Rome, and then the Medieval West that rose from the fall of Rome—forgetting that only half of Rome had fallen. That other half (actually two-thirds, in terms of population and wealth), which would endure for another thousand years, is often bypassed. I always knew it was there. But I also knew it was complex, remote, exotic and, well…Byzantine. Professor Harl untangles much of the political, dynastic, military, religious, and cultural complexities. Even at a mere 12 hours (why not the more usual 18?) there’s plenty here to grapple with, and I now have a reliable outline of the period and the culture, along with some solid benchmarks (the emperors Justinian and Basil II, for example) to guide future reading and listening. Along the way I also began to grasp the roots of the split between the Eastern and Western Church, Russia’s assumption of the Orthodox mantle, her historic sense of mission, and Dostoyevsky’s rabid anti-Catholicism. There are moments when I wish I were in the lecture hall, able to ask for clarification (the course guide, however, is crystal clear). Other times I’d like to ask questions. For example, if Byzantium alone turned back the Muslim tide—a feat for which Harl asserts the West was “unprepared”—then what of the Frankish triumph at Poitiers in 732? Covering early efforts to comprehend the true nature of Christ, Harl sees heresies as merely so many “confessional” options, any of which might have triumphed—and their suppression as the beginning of “medieval censorship”. (Never mind that only by being fully human and fully divine can Christ fully reconcile Creator and creature.) When the faithful process icons and relics, imploring divine assistance in moments of crisis, you can almost see the professor’s eyes roll. On the other hand, Harl gives the first Constantine credit for a sincere conversion. He also refutes the now-standard idea, first stated by Machiavelli and echoed by Gibbon, that Christian mercy and love hobbled Roman strength and discipline. And he discounts the popular notion—one that I’ve passed on to my kids—that an erudite, advanced Muslim civilization preserved Plato and Aristotle for a shaggy, beer-and-broadsword-wielding West. According to Harl, an erudite, advanced Byzantine civilization preserved Greek philosophy for a shaggy, beer-and-broadsword-wielding West. Now, with the fall of Constantinople to the Ottoman Turks in 1453, the next logical step is to listen to Professor Harl’s series on that empire.

For someone with a passion for byzantology, I can say this course was very good. Sadly it focused very heavily on the early and middle empire, but mostly skimmed the later post mazikert empire. Which I found somewhat dissapointing since the Komnenoi are my favorite dynasty. But, all things aside it is an outstanding work of historical skill.

Great, but not exhaustive

I'm a big fan of Kenneth Harl's lectures and highly recommend you check out all of his Great Courses. There's a reason he has such an extensive catalog of GC lectures. That said, his tour of Byzantium isn't the most comprehensive of his works (compared to Vikings or Alexander and the Macedonian Empire). That said again, it's still worth your time. The most engaging lectures of the course were those focused on the Macedonian Dynasty, Basil the Bulgar-Slayer (of course), and the Crusades. The meat of the lectures end at the sacking of Constantinople in 1204. I felt Justinian and his reconquest of the west got short-changed a little in terms of time, but that's my personal preference of course.

I really loved this course. The narrator has a way of giving his information with ease and without boring you to death. It's nice being able to learn about a historical subject without wishing that you had something more interesting to do.

Painful to listen to! While Mr. Harl gives us great courses with tons of information in a splendid way story wise he should have taken a huge step back when delivering it to Audible. Let someone else narrate everything. I simply had to turn it all off after just 10 minutes into the course. Mr. Harl screams untill my ears hurt and is overly dramatic. Aggressive. This style might be good on a theater stage without a mic. Perhaps this is the American way of ”entertaining” but I think the topic and story speaks well enough for itself. This is not a theater nor a school room for 500 students with bad hearing, right? This is Audible (or rather not ”audible” really). Such a shame!