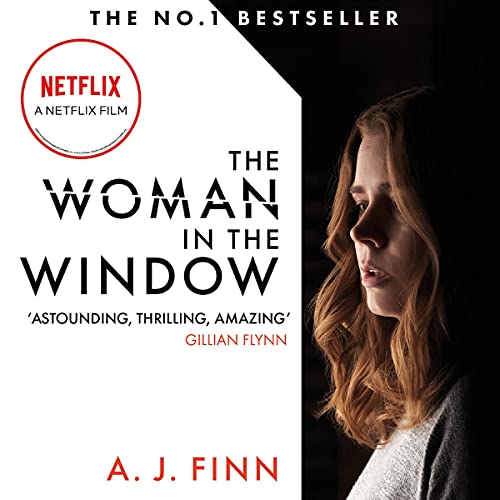 The Woman in the Window

What did she see?

It's been 10 long months since Anna Fox last left her home. Ten months during which she has haunted the rooms of her old New York house like a ghost, lost in her memories, too terrified to step outside.

Anna's lifeline to the real world is her window, where she sits day after day, watching her neighbours. When the Russells move in, Anna is instantly drawn to them. A picture-perfect family of three, they are an echo of the life that was once hers.

But one evening, a frenzied scream rips across the silence, and Anna witnesses something no one was supposed to see. Now she must do everything she can to uncover the truth about what really happened. But even if she does, will anyone believe her? And can she even trust herself?

Good story with an improbable ending

The story as it unfolds is quite good, thrilling to listen to. I liked the frequent reference to old movies that foreshadow parts of the plot. The one thing I found improbable and unconvincing was the ending. I don't want to give anything away, and I know that thrillers require a climax, but this climax sounded exaggerated and unlikely. Still, for about 13 hours this novel is a great listen.

I give up - I simply can’t finish this book it’s that bad. I was so looking forward to it but here we are at Chapter 34 and still pretty much nothing has happened. Don’t bother.

I hoped the psychopath would win

Toning down the histrionics of the narrator for a start. Closely followed by removing at least 80% of the totally unnecessary and floral verbiage. It was like Gerald Durrell on steroids and not nearly as entertaining.

Not a best seller for sure

Would you be willing to try another one of Ann Marie Lee’s performances?

Not if I was offered it freely

What character would you cut from The Woman in the Window?

At Points it felt hard to understand where exactly the story might be going yet it oddly still managed to keep the readers attention.
So when it culminated in a great twist it just made the read totally worth while.

really not worth all the hype, wasn't holding my breath or having a great time finishing this book

Good Storyline, Narrator not as good

the storyline was very good, an excellent psycological thriller
the Narrator read a little slow which made the book somewhat hard to finisb also not quite the best fitted voice for the caracter but if the reading pace is sped up to 1.20 its much better

Sadly, this book was a waste of my monthly credit, the story is long, drawn out and disinteresting. The performance of the reader was fabulous. Just a shame the book was such a bore!!!
I still haven’t finished it!

I simply loved the plot and twists in this novel. It’s very unexpected and exciting!
The narrator has a beautiful calm voice to listen to and is very good at accents.

Best way to clean my house!

Thank you for this gem.

Although I enjoyed this book, I feel that a lot of credit should go to the narrator. Thanks to her “performance” I was kept on the edge of my seat and I felt like I was there myself. That is often not the cause with audiobooks.
I enjoyed the character of Anna. She’s flawed and imperfect and I generally enjoy that in a character. I found her relatable. I look forward to seeing what this author has in store next.

I honestly tried, but this is numbingly boring

The story meanders and doesn't really go anywhere. An absolute waste of time in my opinion. I made it past the half way mark, so I really tried giving this book a chance

Woah what a book!

I really enjoyed this novel! Many OMG moments in this one... or WTF really! Highly recommended if you are a fan of psychological thrillers! I also love the narration carried out incredibly by Ann Marie Lee!!