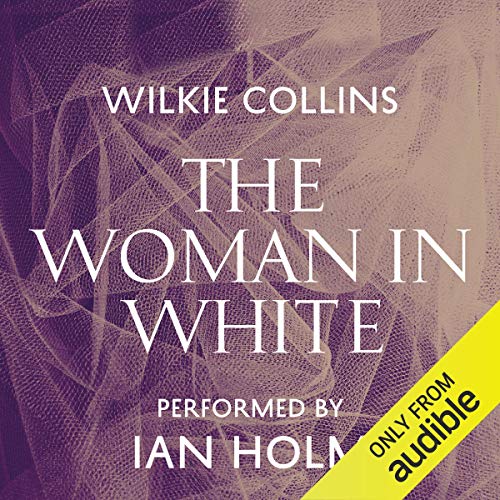 The Woman in White

Late one moonlit night, Walter Hartright encounters a solitary and terrified woman dressed all in white. He saves her from capture by her pursuers and determines to solve the mystery of her distress and terror.

Inspired by an actual criminal case, this gripping tale of murder, intrigue, madness and mistaken identity has never been out of print since its publication and brought Collins great fame and success. Considered to be among the first mystery novels and the first and finest in the genre of 'sensation novels', The Woman in White is noted for its suspenseful plot and unique characterisation.

Collins's use of multiple narrators drew on his legal training and he states 'the story of an offence against the laws is told in Court by more than one witness'.

In 2003, Robert McCrum writing for The Observer ranked The Woman in White number 23 in the top 100 greatest novels of all time. The novel was also listed at number 77 on the BBC's survey The Big Read.

Charles Dickens was a close friend and mentor of Collins, and the two collaborated together on drama and fiction. The Woman in White, as well as some of his other work, was first published in Dickens' journals.

Sir Ian Holm, is a star of the Royal Shakespeare Company, who has played more than 100 roles in films and on television, whilst receiving a stream of awards and nominations. His television debut came as Richard III on the BBC's filmed theatrical production The Wars of the Roses (1965). One of his best-known roles is Sam Mussabini in Chariots of Fire (1981). He has also starred in The Fifth Element (1997), From Hell (2001), The Aviator (2004) and as Bilbo Baggins in The Lord of the Rings and The Hobbit films. He has provided voice-overs for many television documentaries including 1066: The Battle for Middle Earth (2009), starred in the BBC's The Lord of the Rings radio dramatisations and narrated many audiobooks. In 1989 he was appointed CBE and in 1998 was knighted for his services to drama.

A thriller you will not be able to put down!

I read this book on an assignment I voluntarily accepted, and am I glad I did! This is an original thriller, written in journal/diary form from the various perspectives of involved characters. Like Dracula, we get a sense of each character from their writing style and narrative. This book is clever, compelling and wonderfully written. Though it was written in a time when women wielded limited power, this book explores the resources of a particularly resilient woman and how she prevails against nefariously devious men. The twists in this book are somewhat guessable but I would not say predictable. The ending is satisfying. The opening is thrilling. And reading this was pure pleasure. I highly, highly recommend this book.

The outstanding narration is what I enjoyed most

Ian Holm is a wonderful actor and I believe it was his skillful and haunting interpretation of the various characters and complex story that made it so enjoyable to listen to. The restrictive conventions and mores of English society of the 19th century, with an appealingly strong female protagonist, made it of particular interest, as well.

I was looking for a cheap audio book to pass some long hours in the car. This classic sufficed for the most part. This is an intriguing story that will challenge your vocabulary and grab your interest here and there (every 5 hours or so). The narration is on point and the story is engaging but incredibly slow. I'm sure I'm not doing this historic novel justice, but I really just wanted something to keep me awake, not a sojourn into classical literature. This did the job, but barely.

An achievement in Gothic mystery!

In The Woman in White, Wilkie Collins combines classic Gothic ingredients -- the unknown woman escaped from an asylum, long-buried family secrets, switched and manufactured identities, expatriot Italians with shadowy intentions, hidden pasts, blackmail, scandal, and that most heinous of all villains, the well-to-do man of means who spends himself into bankruptcy and will stick at nothing to maintain himself in the manner to which he is accustomed -- into an effective Victorian mystery.

What sets the work of Collins apart is how sympathetically and skillfully he paints the perspectives of those who are not privileged in a given situation, in this case Walter, the young man without means, and the intelligent and capable single woman (also without means), Marian. What might be a simple sensation story in other hands becomes a dark exploration of how the society and law of the day renders helpless very capable and courageous individuals. Over and over again as the terrible secrets unfold, the refrain from various characters seems to be, and quite rightly, "Yes, but who will believe me?"

The special achievement of The Lady in White is the character of Marian, who climbs on rooftops to overhear nefarious plots, goes behinds the backs of her "betters" to verify the letter of the law, wins the admiration of ruthless adversaries, and cannot be undone by the worst intimidations of the villains. Only typhus can (temporarily) lay her low. She does not (as she supposes) disdain her sex: she only disdains the powerlessness forced upon it. The hero is less the main actor here than her sidekick, and Collins packs a lot of commentary into his depiction of both - and their partnership of equals, devoid of romance, built on respect.

As always, Ian Holm's narration is simply superb. He is one of the finest.

Very interesting first half and then twists and turns of plot follow fast and furiously. Long winded and repetitive in a few places in the second half, still interesting in the early detective stories.

Where does The Woman in White rank among all the audiobooks you’ve listened to so far?

I give it an 8 only because I think it would have benefited from readings by various voices. Though this narrator was very good and played the characters well, the story is so intricate that at times I had to go back and re-listen to some parts that I missed along the way.

Loved Marian -- not only strong, but a "class act" as a devoted sister, loving friend and intuitive thinker.

What does Ian Holm bring to the story that you wouldn’t experience if you just read the book?

It would give the story away.

I loved the book and its many twists and turns. And I loved the way the author chose to tell it from so many points of view -- my favorite literary device. Wilkie is clearly a master storyteller and it kept me busily listening for many enjoyable hours.

Would you listen to The Woman in White again? Why?

I have, again and again. Why? Because each review is pure pleasure. I've been copying quotes that have denoted my life precisely.

I need to have a happy ending every once in a while. Mill on the Floss nearly killed me. But for the guy to get the girl or vice versa, too easily deflates the true value of love. Hard won love is the best. Ah, Mr. Hartright, your are a man of true character and worthy of... well, best let the listener listen on.

Oh dear, the sense that each personality is real, set my mind ablaze. I know that they are real. I think I once worked for Count Fosco... You might as well ask me my favorite color.

Three to be honest, set my heart and kleenex in motion. The first was the intense and good relationship of Marian with Walter from the beginning. It was clean, pure and deep. Secondly the parting scene with Walter and Laura... more kleenex. Third, I could have screamed at the scene of the tomb with Hartright and the two women. Oh, to have missed those first few precious moments.... ah well, my heart filled in the blanks.

I have cruely entrapped my sister into the bliss of audio books. I'll buy her this one and the mean old evil big sister will be forever indebted to baby brother. (I'm 64, she's, well older)

The story is great. the narrator is too. The problem is that so few audiobooks can live up to this level that I don't know where to go from here.

I have thoroughly enjoyed this book. It is excellently written and performed. I still have not completely finished it, but I want to review it while I remember. I'm going to listen to it again when I am finished. It is one of the best I have listened to yet. Very much enjoyed, greatly written, and a very good voice makes it the best. It has so many twists and turns it is sometimes necessary to go back and listen again. Maybe that is just my mind that can't remember or keep up but I am fascinated with the who plot or the several turns it takes.

It's a marathon, not a sprint

Interesting because it's the first "mystery" book of it's kind, but the language of the day makes it a long haul to tell this story. The excellent performance makes it manageable.

what an amazing story!

I could not tear myself from this book. Incredible story, many unexpected twists, and great performance too.

I read the book decades ago and still rememered being barely able to put it down. I admire the air of mystery and the carefully crafted plot that has lost nothing of its fasication after 160 years. I also liked the presentation by Ian Holm, the audiobook is a clear recomendation if you enjoy such titles at all.