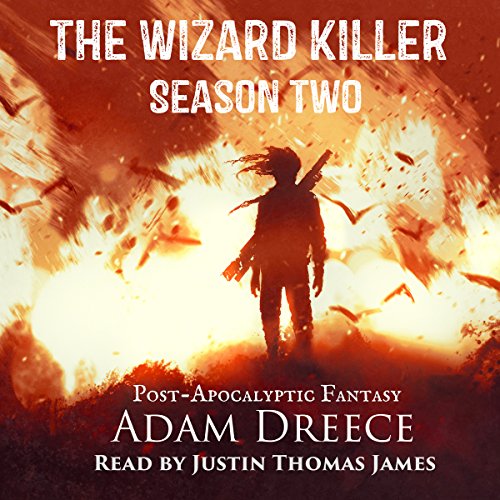 "This is a world with magic and a political situation similar to the world of Stephen King's The Dark Tower.... Wizard Killer contains some of the most well thought out and satisfying magic I have ever read. The magic is subtle, but powerful. The world is harsh but magnificent." - Readers' Favorite, five stars

Continuing right where Season One left off, we return to that magical world, once at the height of technology, which has crashed and burned. Levitating cars lay abandoned, floating cities lie in ruin, and the tyrant wizards who ruled with iron fists are nowhere to be seen.

In Season One, he awoke from the dead for the third time, his memories scrambled. He survived the terrifying wasteland by his wits, his mana-pistol, and luck, but his luck then ran out.

Now, in Season Two, he's got something to say.

Kill me with a floating city? You got my attention. But then steal from me and try to burn me alive? You got me thinking. I think I'm going to find your yigging, walking carcass and introduce it to two friends of mine: pain and vengeance.

By the way, I borrowed a lightning rifle. Don't worry, I'll return it, empty. See you soon.

Season Two kicks everything up a notch. Get yigging ready.

So, we have met again. A man with no name and me in a horrible world of creatures and cruel people, on the one hand, who just want to survive, and, on the other hand, who want to steal, and grab, and kill.

Season two opens more doors and pops up more about our little hero. He still travels and survives, and he, as always, sees his goal brightly and finds as many troubles as it's possible for one unusual man. I'm very happy with getting to know more about him. The death. The pain. The powerful things outside the understanding. Who he is and why did he become him. And after finishing the book I definitely want to know if he gets the wizard's throat.

The story is going on, so, don't waste time and just start reading!

I also want to tell that the narration by Justin Thomas James is awesome! He made the main character alive and emotional, and the story was very clear. I'm looking forward to hearing the season 3. And you?

great is the first book

5 Stars for Another Phenomenal Audiobook Experience!

This is a "must-listen" for audiobook addicts like myself!

Dreece is back with an explosive new season of his addictive serialized western fantasy. Season two turns up the heat with another set of high-octane episodes guaranteed to keep readers turning the pages. Prepare to binge-read every episode of this full-throttle adventure!

I am convinced that Dreece is a master of serialized storytelling. These are the kind of books that are best consumed in one or two sittings, making them the perfect binge-reads. I read the entire second season in one sitting, because I simply could not put it down.

Season two contains all the elements that made season one so entertaining. Once again, the episodes are filled with non-stop action and plot twists that are constantly advancing the story forward. Compared to the first season, the writing and plot of season two are tighter and more focused. The descriptions are incredibly vivid and creative, painting a clear picture of this magical wasteland. The narrative has slightly gritty tone, with just enough wit and magic to keep the story accessible to readers of all ages. This serial blends together the best elements of Max Max and Fallout to create an imaginative dystopian fantasy with a decidedly western flair.

Season two includes a helpful recap of season one so you can jump right into the story. However, if you have not yet started the Wizard Killer series, I personally recommend starting back in season one, because the the first book is also brilliant.