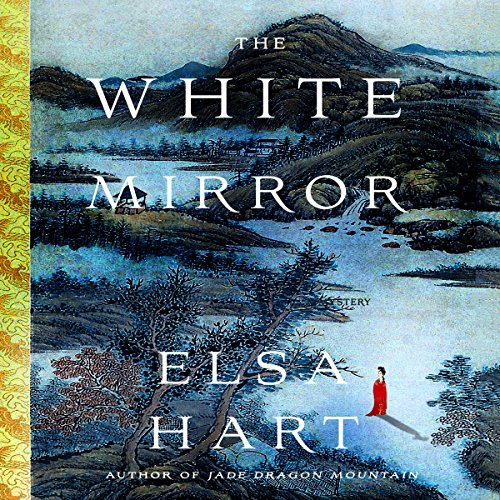 In The White Mirror, the follow-up to Elsa Hart's critically acclaimed debut, Jade Dragon Mountain, Li Du, an imperial librarian and former exile in 18th-century China, is now an independent traveler. He is journeying with a trade caravan bound for Lhasa when a detour brings them to a valley hidden between mountain passes. On the icy planks of a wooden bridge, a monk sits in contemplation. Closer inspection reveals that the monk is dead, apparently of a self-inflicted wound. His robes are rent, revealing a strange symbol painted on his chest.

When the rain turns to snow, the caravan is forced to seek hospitality from the local lord while they wait for the storm to pass. The dead monk, Li Du soon learns, was a reclusive painter. According to the family, his bizarre suicide is not surprising, given his obsession with the demon world. But Li Du is convinced that all is not as it seems. Why did the caravan leader detour to this particular valley? Why does the lord's heir sleep in the barn like a servant? And who is the mysterious woman traveling through the mountain wilds?

Trapped in the snow, surrounded by secrets and an unexplained grief that haunts the manor, Li Du cannot distract himself from memories he's tried to leave behind. As he discovers irrefutable evidence of the painter's murder and pieces together the dark circumstances of his death, Li Du must face the reason he will not go home and, ultimately, the reason why he must.

"Narrator David Shih...keeps his enunciation even and crisp, teasing out the clues as this tale, intricate as a tapestry, begins to unravel its secrets." (AudioFile Magazine)

I enjoyed this sequel and look forward to more. the narrator has a great voice and really helps with experience. the cultural experiences throughout the story are interesting and a good change from the stereotypical English murder mystery which prevails so much in this genre. I am also getting involved with the characters which leads me to hope for more.

I have listened to this book twice. The second time, about 2 years after the first, was more enjoyable. It is a complicated story and requires concentration. This experiences convinces me that the listener's frame of mind influences how a book is received.

The narrator is pitch perfect. His voice is soothing and mysterious at the same time. The prose is magical, at times so vivid it seems like I was looking a painting. And painting is part of the story. The saga of Li Du, the librarian from the Imperial Library in the Forbidden City, continues. He is traveling after his last adventure in the mountains between China, Tibet, and India. It is cold and snow has fallen. Just the kind of place for a magical story.

A little slow but worth it.

A good solid mystery just a little too long

For people who like a good puzzle mystery this is a very good puzzle mystery. However I felt the story was a little too long to give it overall five stars. Also the near ration which is good could’ve been better. Overall it’s worth the money.