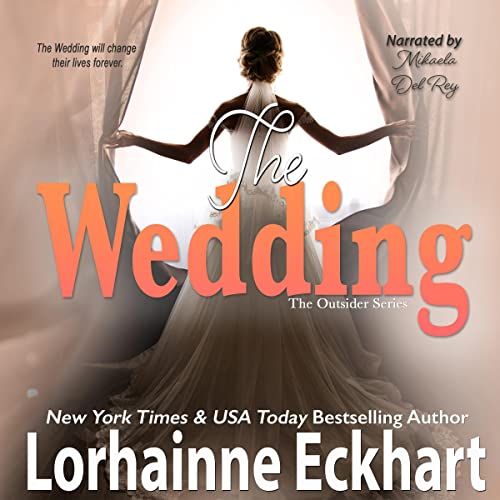 A man who's always planned everything and a woman who's struggled alone—the wedding will change their lives forever.

In The Wedding, Candy McCrae has everything she could ever want, and she’s about to marry the one man she’s always loved. He has money, he’s powerful, he’s drop-dead gorgeous, and he has a very close, attentive family with babies, nieces, and nephews running everywhere. For the first time, Candy has someone making decisions for her. So why is she so nervous?

Candy is the one woman Neil has always wanted, a woman who doesn’t care about flash and glitter and status, and he can’t get her to the altar fast enough. He has plans for his bride-to-be. He wants a family, lots of children, and for her to be a part of his world, with all its money, power, and million-dollar deals. He’ll look after her so she’ll never have to struggle again, and he’s planned and organized everything.

She goes along with it until the wedding, when she takes Neil’s hand to be his wife, and what she’s refused to share will change their lives forever.

The Wedding (The Outsider #7) was a great read by Lorhainne Eckhart. Candy McCrae is about to marry the man she loves. He is powerful, gorgeous, has money, and a very close family. Neil has always wanted Candy, a woman who doesn’t care about his status or money. He has plans to marry her as fast as he can. There is something that she refuses to share that will change their lives forever. I enjoyed reading this book and cant wait to read more by the author.

A GREAT STORY ABOUT THE CHALLENGES THAT LIFE CAN BRING AND THE JOY. THE NARRATOR IS GREAT ALSO.

This is the seventh story in the "Outsiders" series. It is the first one I have read, or in my case listened too. It can be read/listened as a stand alone read but does have connected characters. This one is about Candy and Neil. She has been betrayed by her father and pretty much has lost everything. She is rescued by Neil, who completely takes over in a bulldozer fashion. These men love entirely and hard but sometimes they are overly focused on the wrong things. Neil pushed hard for the wedding he wanted. Candy felt like she was drowning and left without a say. She was overwhelmed to say the least. When she finds out she is pregnant things get more challenging. On the day of her wedding the unexpected happens. This is such a good read. I was glued from beginning until the very end. I love the characters and the plot is captivating.

This is book 7 in Eckhart's The Outsider series. While this is the first in the series that I've read and think that I could have benefitted from previous reads in the series I don't think that it took away from my overall enjoyment of these characters and the storyline. Our main characters are Candy and Neil both are seemingly stubborn and appear to have some communication issues but there is definite love between them. This read is full of romance, steam and heartbreak. Wonderfully narrated and well written this is a book that is sure to pull on some heartstrings!

I received a free copy of this book at my request and I voluntarily provided this review.

Give it a try.

This story is not one I normally enjoy reading. I was frustrated by the actions of some of the characters. As I have not read the earlier books I was a bit unfamiliar with their back story. The story is okay just not my cup of tea. Narration was good.

This is the 7th book in a series.
without reading the first 6 books (or at least the last book before this one), I missed a lot of the references, and I could only guess as to the relationship nature of the main couple.
This made it difficult for me to relate to the characters and their story.
The narrator was okay, but not more than that.
I received a free review copy of this book and am voluntarily leaving a review.