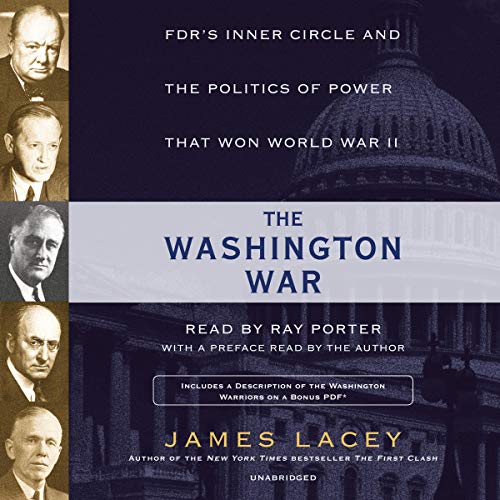 A Team of Rivals for World War II - the inside story of how FDR and the towering personalities around him waged war in the corridors of Washington, DC, to secure ultimate victory on the battlefields of Europe and the Pacific.

The Washington War is the story of how the Second World War was fought and won in the capital’s halls of power - and how the United States, which in December 1941 had a nominal army and a decimated naval fleet, was able in only 30 months to fling huge forces onto the European continent and shortly thereafter shatter Imperial Japan’s Pacific strongholds.

Three quarters of a century after the overwhelming defeat of the totalitarian Axis forces, the terrifying, razor-thin calculus on which so many critical decisions turned has been forgotten - but had any of these debates gone the other way, the outcome of the war could have been far different: The army in August 1941, about to be disbanded, saved by a single vote. Production plans that would have delayed adequate war matériel for years after Pearl Harbor, circumvented by one uncompromising man’s courage and drive. The delicate ballet that precluded a separate peace between Stalin and Hitler. The almost-adopted strategy to stage D-Day at a fatally different time and place. It was all a breathtakingly close-run thing, again and again.

Renowned historian James Lacey takes listeners behind the scenes in the cabinet rooms, the Pentagon, the Oval Office, and Hyde Park, and at the pivotal conferences - Campobello Island, Casablanca, Tehran - as these disputes raged. Here are colorful portraits of the great figures - and forgotten geniuses - of the day: New Dealers versus industrialists, political power brokers versus the generals, Churchill and the British high command versus the US chiefs of staff, innovators versus entrenched bureaucrats...with the master manipulator, Franklin Delano Roosevelt, at the center, setting his brawling patriots one against the other and promoting and capitalizing on the furious turf wars.

Based on years of research and extensive, previously untapped archival resources, The Washington War is the first integrated, comprehensive chronicle of how all these elements - and towering personalities - clashed and ultimately coalesced at each vital turning point, the definitive account of Washington at real war and the titanic political and bureaucratic infighting that miraculously led to final victory.

Includes a bonus PDF of a who's who of the Washington Warriors.

“James Lacey’s study of World War II Washington politics reminds us that managing wartime affairs or exercising control in D.C. is always a great challenge. The Washington War, about Franklin Roosevelt’s masterful handling of political difficulties, should be a primer for anyone who is discouraged by current events and wishes to recall how a president makes our system of government function effectively.” (Robert Dallek, New York Times best-selling author of An Unfinished Life: John F. Kennedy, 1917-1963)

“James Lacey has produced a spectacular book on how American decision making and strategy formulation occurred in the political maelstrom of wartime Washington, the center of the Second World War’s most powerful nation. A work that everyone who has more than a  passing interest in the history of World War II needs to read, The Washington War now establishes Professor Lacey as one of the most important scholars  of American military history.” (Williamson Murray, co-author of A War to Be Won and A Savage War)

“And you thought fighting the Germans was hard! James Lacey’s brilliant new book, The Washington War, shows us the policy conflict raging in our nation’s capital: Harry Hopkins versus Harold Ickes, Sumner Welles versus Cordell Hull, George Marshall versus Ernest King, Jimmy Byrnes versus anyone who got in his way. And towering over them all, FDR, part Machiavelli, part mixologist in chief. Lacey’s book is a delight from start to finish, filled with sharp writing and unforgettable character portraits. I have never read a book that taught me more about wartime power relationships in Washington.” (Robert M. Citino, Samuel Zemurray Stone Senior Historian at the National WWII Museum)

“A densely researched, thorough history for students of Roosevelt and World War II...Lacey manages to gather together the many strands of this remarkable story of how the US government harnessed the disparate talents of business leaders, congressmen, volatile generals, and prickly heads of state such as Churchill.” (Kirkus Reviews)

Puts into perspective how the background of WWII was so crucial. While men and boys fought the war, our ability to give them the necessities won it.

Interesting discussion of how mostly secondary characters affected the outcome of WWII. Worth listening ot.

Learned so very many material facts and insights. I recommend this book to anyone who wishes to gain meaningful insights into intelligent, effective political execution.

An engaging storyline unpacking the war behind WWII fully capturing the players involved. I highly recommend.

Lacey’s introduction initially had me question whether his background and point of view could capture all aspects of I hoped to hear about - he exceeded expectations!

This really created a picture of how politics and the inner workings of Washington take place, and under the auspices of a leader such as Roosevelt who was a master politician. I think any student of history, business and or war strategy can gain incredible insight from this account that so masterfully handles the complexity and nuance of global politics at a time of war. The reading was excellent and one of the best interpretive deliveries I’ve heard in some time. Well done

What a nasty little book! I should've been alerted when the 'author' sounding like a bad imitation of The Fonz, issued a blustering, combative introduction. However, I plunged on because the reader is quite good. For historians who want to learn history, this is a waste of time. Truly, it's like some Hollywood gossip columnist writing, only it's about the great men who led us through World War II. If there is an unflattering, gossipy way to present one of these characters, then this 'author' finds it. We all know that events, whether great or small, can be interpreted in many ways. Well, this 'author' has taken the low road in the same way that Fox 'news' takes to titillate viewers. I'm truly sorry I purchased this poor excuse for a history book and no, I put up with about 2 hours before I pulled the plug.

Absolutely fascinating. I had no idea that we started arming so early. I learned so many new things listening to this book. Fantastic narrator!

Thank you Audible for making this available.