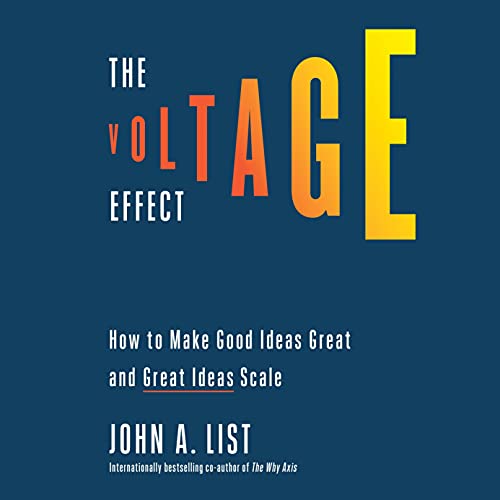 A leading economist answers one of today’s trickiest questions: Why do some great ideas make it big while others fail to take off?

“Brilliant, practical, and grounded in the very latest research, this is by far the best book I’ve ever read on the how and why of scaling.” (Angela Duckworth, CEO of Character Lab and New York Times best-selling author of Grit)

“Scale” has become a favored buzzword in the startup world. But scale isn't just about accumulating more users or capturing more market share. It's about whether an idea that takes hold in a small group can do the same in a much larger one — whether you’re growing a small business, rolling out a diversity and inclusion program, or delivering billions of doses of a vaccine.

Translating an idea into widespread impact, says University of Chicago economist John A. List, depends on one thing only: whether it can achieve “high voltage” — the ability to be replicated at scale.

In The Voltage Effect, List explains that scalable ideas share a common set of attributes, while any number of attributes can doom an unscalable idea. Drawing on his original research, as well as fascinating examples from the realms of business, policymaking, education, and public health, he identifies five measurable vital signs that a scalable idea must possess, and offers proven strategies for avoiding voltage drops and engineering voltage gains. You’ll learn:

By understanding the science of scaling, we can drive change in our schools, workplaces, communities, and society at large. Because a better world can only be built at scale.