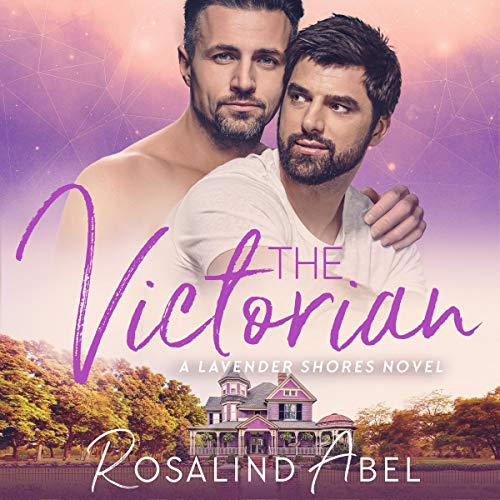 Sexy bartender Seth Marino is the epitome of the allure and sophistication for which the town of Lavender Shores is known. For 20 years, Seth has found contentment and happiness as co-owner of the Blue Blossom Bed and Breakfast. Seth’s kind heart, good looks, and humor charm both locals and tourists - except the one person who despises him.

Charley Perez began building the life of his dreams a few years before Seth moved to town. Just as his hard work was about to pay off, Charley saw his hopes for building a restaurant worthy of his abuela’s recipes slip through his fingers when Seth arrived.

When Lavender Shores welcomes a star-studded food-and-wine celebration, Seth and Charley are forced to work together, leading to an explosion of anger and passion. Both men find the heat and fire of hatred morphing into an irresistible attraction.

But even as Seth sees a different side of Charley, the hurt and anger of the past simmer below the surface, threatening the future. And a lifetime of struggle isn’t easy for Charley, who must find the courage to show his true self in seeking help and reaching for his dreams.

Grabbed me right off.

There are some odd plot twist but nevertheless I wasn't left hanging for long. I don't always understand why people do things but that's just life I guess. So yeh, I loved it. Both of the main characters were captivating as all of the characters have been in this series. I wanted to know them all and I wanted to be there. I was rooting for Charlie and Seth as if they were best friends. The sex gets a little rough in The Victorian but isn't that the piquancy. Kirt Graves, the narrator, was perfect.

Hat and Sexy enemies to lovers

The Victorian is book 9 and as long as you’ve read some of this series you may be OK but I do recommend you read them in order.

I really liked this story but I love a good enemies to lovers story. I like the setting and town of Lavender Shores and you get more of the other characters. This is set around the holidays and also has a food festival in it that makes it fun since I love food shows and chefs.

Kirt Graves does a great job narrating. I liked the voices and everything about it. If you can get the audio I highly recommend it.

Now I do warn you… it is very sexy and hot with some fairly rough sex scenes.

All the love for this amazing enemies-to-lovers, hurt-comfort romance!!
This one is full-on. These characters loathed each other and had done so for about two decades. Their mutual animosity ran so deep; I wondered how they would ever get over that. What could possibly get these men to reevaluate their opinions and start seeing each other in a different light? Not to mention forgive past hurts? Because some of their exchanges were incredibly vicious.
But the author managed it brilliantly, turning from enemies to lovers to hurt/comfort with a twist I didn’t see coming, but which tore at my heart. All at once, it became a very different story. Deeply emotional and heartbreaking.
Seth and Charley are both complex and wonderful characters. Their chemistry is off the charts, but what really got to me the most were the little things like Seth showing up on his birthday to be there for Charley, without any expectations, the tentative handholding which is so much more revealing than angry sex ever could be.
I loved the bond between Charley and Mabel & Sapphire. It was so good to see him have those two in his corner. Same for his connection with Alex, the way he stands up for her and supports her…those were some of the best scenes in the book.
Seth and Charley aren’t the most “conventional” couple, but their love for each other runs so deep. It was incredibly inspiring. I also loved that it wasn’t an easy thing for either of them. They are tested from the onset, and that made every little step they took closer to each other even more fulfilling.
The epilogue was all I could have wanted, so touching and romantic while still staying true to who these characters are. The perfect feel-good ending where we leave our MC’s in a happy, hopeful place.

Narration: Kirt Graves absolutely nailed this one! I have loved every one of his narrations for the Lavender Shore books, but his performance of The Victorian was truly special. There’s so much raw emotion between Seth and Charley, and he captures it all brilliantly: their passion, their animosity, their hurt… and the understanding and love that grows between them. I loved his voices for both MC’s. Everything about this audiobook was perfect!

A real representation of mental illness in a book.

Seth is the town playboy that everybody loves. Charlie is the surly difficult Mexican tavern owner who can be seen frequently fighting about produce at the local Green Violin.

I really want to go into detail about every single thing that happens into this book it is my second favorite of this series. The first being The Garden. This book hit on a lot of levels for me because it gave a true and accurate description of what it's like to be both mentally ill and trying to make it with all the raging swirling thoughts in your head without medication. Seth being able to see through all of this after so long of hating each other made me want to cry. Him seeing beyond all of Charlie's issues and reactivate responses made me love both characters even more. Everything in this book was attention grabbing for me. Everything in this book perfect. Men over 40, hairy bodies, and a surprising threesome starting the book. But there's so much more in this book the emotions, the rage, the understanding, the misunderstandings, the love/hate, the storm of a chemically imbalanced brain, the forgiveness, the hard work to get yourself to a better mental state, finding what makes Charlie happy, finding Seth in love again, this book is one of my all time favorites and I would be here all day trying to describe it. Plus did I mention Kirt Graves is the narrator?