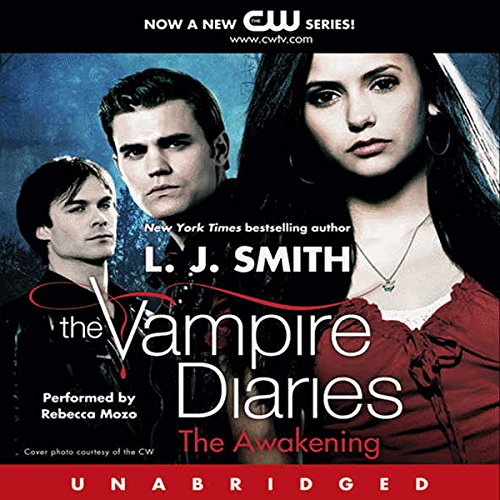 Elena Gilbert is a high school golden girl, used to getting what she wants. And who she wants. But when the boy she's set her sights on - the handsome and haunted Stefan - isn't interested, she's confused. She could never know the real reason Stefan is struggling to resist her:

Stefan is a vampire, and Elena's in danger just by being around him. What's more, Stefan's dark, dangerous vampire brother Damon has just arrived in town. And wherever Damon goes, trouble always follows.

Fans of The Vampire Diaries TV show will find this book packed with the same kind of heart-stopping suspense, fierce romances, and jaw-dropping surprises that they know and love, all brought to life by New York Times best-selling author L.J. Smith.

I originally read this series in the mid-nineties after it first came out. These, together with The Secret Circle followed with the Night World series made up half of my &quot;must keep&quot; books. Twenty years later I still have copies with the original cover art. So when I first heard they were coming out with a TV show for both, I had major reserves. The Secret Circle failed in many ways. Not only did it not follow the written narrative, but the characters and storyline they chose to go with did nothing to make up for it.

As far as TVD, the show is much different than the books. Really, you almost can't compare the two save for some of the names and the fact that Elena' s caught between the brothers. Other than that, the people and places contrast majorly. For one thing, Elena is blonde, Bonnie is a fair skinned red-headed and Meredith Fell is a forth friend. Jeremy doesn't exist and is a 5 year old sister, instead. So fans of the show may be extremely disappointed.

Please don't go into this expecting them to feel the same. You have to read/listen with an open mind. The actual writing, though, yes it is a YA novel, is very mature. However, if you LISTEN to this, none of that will come through. The narrator is horrible. She comes across as a whiny stuck up tween who over-dramatizes every sentence. And she pronounces their last name, Salvatore, as &quot;Salvatoray&quot;. Drove me friggin nuts. Her performance, especially her accent for Stefan sounding much like Luigi from the Mario Bros, ruined the entire book.

I honestly believe given a higher-grade narrator, preferably an adult, this would be so much better and would appeal to all ages. All of L.J. Smith's original stories would. Do not read the ghost-written books. There just is no comparison.

But for this to be experienced as it should, you need to read it for yourself vs. listening unless (or hopefully until) they record another version. Otherwise you might not make it through the entire thing and that would be a shame. It was one of the first of its kind.

I have never watched the TV version before, so I can't compare it with the book. But this audiobook kept me entertained from the beginning to the end. I read so many negative reviews about this audiobook that I'd struggled whether to buy it for a long time. It turned out to be much better than I had expected. I saw (and you will too) so much of this book's shadow in Twilight. I swear some of the scenes are almost exactly the same. You'll have to say it's original because it was written twenty years ago. Anyway, just buy it if you love reading paranormal romance.

Much better then the TV series.

It took me a while to get into it, but once I did I was hooked. It's not at all like the TV series. It has the same characters and the same struggle for Elana, but the story is very different. I watched the TV series but so far I like the story in the books MUCH better. On TV, just like they did with TrueBlood, they took the characters and some of the basics and then re-wrote it. Personally in both cases the books have the best stories. Definately worth listening to!!!

Well read by the actress. The book is sort of interesting, though it is completely different from the TV show, the reason I got interested in the first place. Much, much better than the Twilight saga, there's really no comparison between the two: The Vampire Diaries is more compelling, better written and overall more agreeable.

Great story, some issues with the narrator...

I will say that there are a few things I dislike about the narrator's performance. One of them being that she pronounces "Salvatore" with a long "E" at the end. She pronounces it like "sal-va-tor-y" versus "sal-va-tor". The latter is how they actually pronounce it in the show. I'm not sure which one the author meant to be the correct pronunciation, but I much prefer the way they pronounce it in the TV show. So that's one downside... but it wasn't enough to make me dislike her performance altogether. I do feel myself cringing every time she says Stefan's and Damon's last name for any reason though. Second, I HATE the way she does Stefan's voice! It bugs the heck out of me! I'm definitely not a fan of the awful Italian accent she attempts to do and I'm hoping the different narrators in the next few books do a better job because that one thing did almost make me stop listening and return the book.

With that being said... the story itself is great. I have somewhat of a vampire obsession. I love Twilight, True Blood, or any other vampire-related TV show, movie, or book. So this series is just another bonus to add to my collection of favorite vampire-related things. I love this "universe" because the character story lines and the way they all connect somehow are my favorite compared to all other series (such as Twilight). And each vampire-related book, series, etc. always has a different set of skills that vampires possess. For example, in Twilight, they all have a different type of skill (i.e. Edward reads minds, Alice sees the future, etc.). But I just love Damon and Stefan's skills. And the love triangle between them and Elena is an added BONUS!!

If I had to say whether or not I would recommend this audible listen, I'd say go for it. It's definitely worth the $7 it costs if you choose not to use a credit. But I wouldn't recommend wasting a credit on such a short listen (since it's only about 6 and a 1/2 hours long). Save your credits for something that's at least 10 hours long! But if you can get past the way Rebecca Mozo pronounces "Salvatore" as well as the way she does Stefan's terrible accent... then go for it. But you will probably be pretty disappointed if you're like me and you watched the show FIRST. It was hard for me to picture Stefan's face in the show and put it together with the awful accent Rebecca does. And one other small thing... I am sort of missing some of my favorite characters from the TV series that aren't in the books, but I know that's not something I can complain about considering these were written well before the TV show was. :)

Enjoyed it so much i have downloaded the next two books. Highly recommend it for you fellow vampire lovers.

What disappointed you about The Vampire Diaries, Book 1?

Who would you have cast as narrator instead of Rebecca Mozo?

This is nothing like the tv show. the show is much better. the characters are much different. I still wanted to hear the story but the narrator caused me to turn it off. as far as the story, thank God for Kevin Williamson for making it better.

if you are a fan of the show, yiu won't be of this

I realize the book inspired the show, and so I can imagine (as I have been before) the disappointment book fans experienced when it first aired on the CW. I am a late-comer to the books, though, and am a little disappointed. Elena's character seems immature. at first I thought she was going to be a great, arrong female character. I quickly found she is as angsty and stupid (sorry, that sounds harsh), as both Romeo and Juliet. You find yourself thinking about how foolish she is acting and can't help but be annoyed. The writing is awkward and seems immatute as well. There were parts where I found myself wondering how developed of a writer L.J. Smith was when she wrote the first book. I dislike that Elena is immediately obsessed in an unhealthy way, and wanted it to feel more natural. There is a part where Elena drinks Stefans's blood (I think?) and I found it to be very weird and ruined the moment. I could have handled insinuating some adult content instead and simply moved on to more plot. I also was a little turned off by the accents the narrator used for the Salvatori brothers. They have been around for a few hundred years and they haven't lost or changed their accent? All of this said, I am going to read the next one to see how the style of writing progresses within the story. I hope the characters become much less obsessed and are more mature moving forward. This was not a terrible book, but not on the same level as some other YA literature that has been popular in recent years. I should also out out that I am well beyond the YA years, so maybe I am finally at the point where I am just too far removed to identify with younger protagonists. Read away, YA-ers! I might be the exception with my slight disappointment!

This story seems to follow the same type story as the twilight. Teenage angst and all.

Being made into a TV series was the best thing for this book, other wise this story is weak and has no characters you care about. The TV show pretty much just uses names and location, other wise the story is very different.

Now, this story does have some similarities with Twilight, which I enjoyed a lot, but only in situation, not in any feeling that you get for these people.

The narration is good, and easy to listen to, but that said I will not be getting the sequels. not worth my credits.