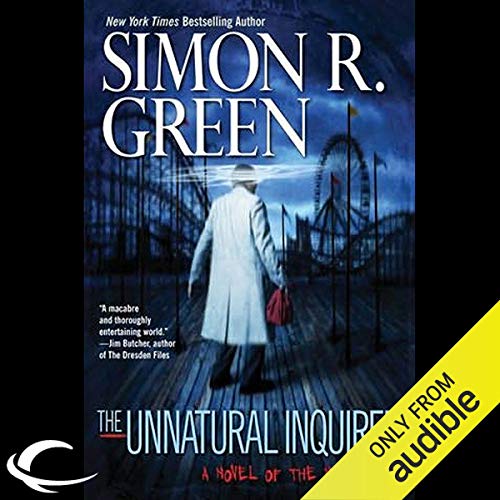 John Taylor's the name. I'm a PI, working that small slice of mystical real estate in the hidden centre of London that's called the Nightside. It's a place where the sun refuses to rise, where monsters and men walk side by side, and where you can fulfill your every dark and depraved desire. What I do there, better than anybody else alive (or dead) is find things - for the right client, for the right price. My new client can certainly afford me.

The editor of the Unnatural Inquirer, the Nightside's most notorious gossip rag (the one everyone pretends not to read), has offered me more than one million pounds to find a man named Pen Donavon, who claims to have evidence of the Afterlife - picked up on a television broadcast and burned onto DVD. The Inquirer made Donavon a sweet deal for exclusive rights. Then both he and the disc vanished. I don't know if the disc is on the level, but a job's a job (and a million pounds is a million pounds). Trouble is, not only are all of the usual suspects pretty dangerous individuals, but it's beginning to look like someone else - someone very powerful - is on the trail, too. And who - or what - ever it is, is deadly determined to find the disc first.

"Green skillfully blends action and humor, and shows no sign of running out of ideas. This installment will undoubtedly rope in new readers who enjoy his blend of dark humor and the supernatural." ( Publishers Weekly)

What I find terribly cool about listening to this novel is that I can really see, for the very first time, the influence of Dashiell Hammett's The Thin Man on the series. The main characters of that novel, Nick and Nora Charles, are clearly reflected in the characters of John and Bettie in this novel. Working together rather well, they solve a complicated mystery by combining their talents in a way which compliments each other quite nicely. (Somewhere in the Nightside series, Green pays homage to Samuel Dashiell Hammett by mentioning that multiple Maltese Falcon are always for sale somewhere in the Nightside. Nice touch, Green!)

Good parts here from a narrative perspective include John and Suzie dealing with the Aquarius Key; Max Maxwell (so named because he so big that his name is repeated twice), the self-proclaimed Voodoo Apostate, at the demon infested Fun Faire fending off really nasty bounty hunters being ridden by the loa Max would like to control; and Taylor dealing with a very hungry T-Rex as he needs to talk to the Collector very badly. The ending of the latter is the single funniest bit of dialogue in the entire Nightside series! (Scariest bit is the part describing Shadow Deep, the Nightside prison. What a nasty place that is!)

Was it better listening to The Unnatural Inquirer than reading it? Definitely yes.

So good you will go nightside.

walk with me. look to yourself carefully here in the part of London that is not heaven or hell. It's a place where you can get anything you want for a price and beg to pay it. Careful now even the cars are hungry and the ambulance is fueled on pain. See that man over there? Don't look because looking means you're a tourist and a prize to be had. That's Jack Taylor. He could have been king here, or God, but he is said to have a gift, a gift for finding things with his magical eye , his private eye. Never show weakness here, here in the Nightside.

I've listened to all in this series (so far). Have to say, this was the weakest. It was short; my impression was, the author was just writing something to fulfill a contract. Of course, the narration was, per usual, terrific -- and worth the listen for that alone. But, don't expect any deep plot. Much of the book was tie-backs to things we've all listened to in previous entries in the series. If you're guarding you credits, you can safely skip this one. Not much new to listen to hear, move along, move along. "And it was just the easiest thing in the world ... ", to just move along. (Am hoping the next in the series is better)

I really enjoyed this book my. only complaint is that it seemed rather short but all of Simon r greens books never seem to be long enough. I could listen to his books for years

Love the night Side books

What made the experience of listening to The Unnatural Inquirer the most enjoyable?

This series is fun and fast paced. it is a quick listen and I always enjoy them.

John Taylor is a fantastic character. He is deeply flawed and a good bad guy. I like how he has developed through the series.

I liked his conversation with the reporter about why he and Suzy Shooter belong together.

Everything about Betty Divine was pointless, annoying, and out right stupid!!!! Obviously she was created for the male or gay female attention but other than that her character was pointless.

Shot Gun Susie is actually the only female character that should be in the series as John's partner at all times, PERIOD!!!!!!

Other than that, the story was FUN and BRUTAL and FULL OF MOUTH WATERING ACTION that was of course ruined by the most annoying and disgusting female character created, Betty Divine. -rolls eyes- She's worse than all the annoying female characters from the Sandman Slim series!

Formula has become stale and repetitive

John Taylor has been hired by The Unnatural Inquirer, the gossip magazine of the Nightside, to find a stolen DVD that allegedly contains a recording of a transmission from the afterlife. His investigation will take him all over the Nightside where we’ll encounter old and new friends (and enemies).

The Unnatural Inquirer is the eighth book in Simon R. Green’s NIGHTSIDE series. If you’ve read all the previous books, you know what to expect here and, depending on your tastes, that’s either a good or a bad thing. If you just want to hang out with John Taylor and his friends in the Nightside, The Unnatural Inquirer will probably please you. It’s got everything we expect from a NIGHTSIDE book — a fast-moving romp through a decadent parallel world with some of the strangest people and creatures you’ll ever meet.

Unfortunately, as I’ve mentioned in my reviews of the past few books, this formula has become stale and repetitive and I’d say it’s intolerably so in this novel. Again, something is interfering with John Taylor’s power so that he’s forced to do old-fashioned detective work rather than use his magic to solve the crime. Again, the power comes back when the plot needs it to. By the way, I’m still confused by John’s magic. Everyone is afraid of him because he’s the most powerful entity in the Nightside, yet the way he uses his magic seems arbitrary. Why can he sometimes do amazing world-bending things with his power, but other times he seems to forget he has any?

Again, we go to new places and meet new characters and organizations who are so important or powerful in the Nightside that we should have heard of them before now. In every book we meet a character (a “Major Player”) like this. In The Unnatural Inquirer it’s the Removal Man — a man that everyone is afraid of because he can remove someone from the world with just a thought. Yet we’ve never heard of him before now. And why have we never heard of The Unnatural Inquirer, a magazine that’s very influential in the Nightside? The fact that we haven’t indicates that Green is making it all up as he goes along. That’s fine, but it makes his world feel very thin. It’s all quite inventive — Green frequently gives us new lists of all the weird people who exist, and weird stuff that happens, in the Nightside — but it’s paper thin. He may describe ten characters in thirty seconds and we’ll chuckle and think “that’s cool,” but we’ll never hear of them again.

Again, Green uses the same wording over and over and I can even predict some of the things he’s going to say (“I opened my eye, my private eye… and it was the easiest thing in the world to…”). This is perhaps what bothers me most — the fact that so much of the wording is the same in every book.

I keep reading NIGHTSIDE because I purchased all the books on audio when they were on a sale at Audible. The narrator, Marc Vietor, is wonderful and I don’t regret reading them — they’re entertaining — but Green seems creative enough that they could be so much better.