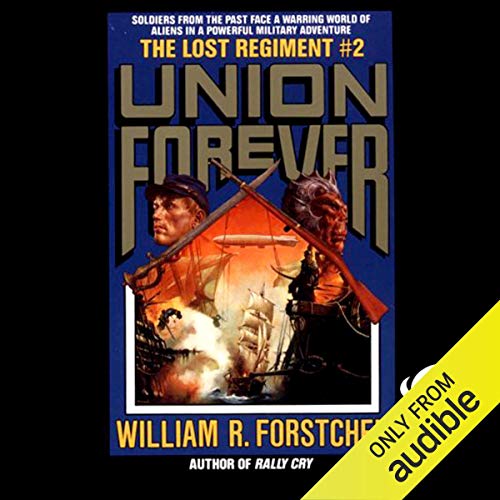 Colonel Andrew Keane and his blue-coated soldiers were not the first humans time-space-warped to a world so familiar yet so foreign. Humans abounded on the perverse planet-humans treated like cattle by the alien warrior overlords. Keane's Civil War weaponry defeated the swords, spears and crossbows of his monstrous adversaries. And part of the human population was freed, but the other part became puppets of the overlords in a vast counterattack. Now it was human vs. human, gun vs. gun, ironclad against ironclad, as the empires of Roum and Cartha clashed in gut-wrenching, soul-stirring struggle for the future of a world beyond time.

The Union meets Godzilla the Hun.

Well written action and battle with nice character development. You not only are led to understand the motives of the Union soldiers but you also look through the eyes of some of the baddest bad guys you are likely to run into and see from their point of view what makes their actions logical and right by their culture. The humans have to win this one for there is no retreat. It is hard to believe there are worse things than to be dead on a U.S. civil war battle field or even to be a prisoner of war in some place like Andersonville or Point Lookout but on this world there are.

[Cut down one of those redwoods; hollow-out a dozen 2’x4’ diameter holes around the top, and one 4’x12’ diameter hole on the back end; pack the dozen small holes with black-power and shot and line the big hole on the back with bronze to form the combustion chamber. Then use the Zn shavings and sulfurous acid to make the hydrogen fuel and SWOOSH!!!…].

Just kidding; it’s not quite that bad but it is very imaginative. Don’t misunderstand, I love this stuff .

I'm a sucker for alternative histories, from Twain's Connecticut Yankee... to Flint's 1632 series. I'd read Forstchen's Lost Regiment a few years ago, so I decided I'd try the sequel from Audible. Bad idea! The narrator is awful. Even straightforward narrative text is read with overwhelming drama, and voices are downright ridiculous.
I cannot say whether the Forstchen's book is good or not. The narrator sent me fleeing after half an hour!

A better then usual sequel

Not quite as good as the first but still worthy of 4 starts since I can give 1/2 stars. A few too may "we can pull that off faster then possible" moments and "we just happen to have this laying around" situations to but still fun to listen to.

This is a fast paced second book. The story is great and interesting. Must start the third book.

With the Tugars defeated in the last book, the transplanted Americans and their Russian allies have to face a new threat; their Merki rivals. This time however, the threat is increased by a deserting traitor collaborating with the alien horde, as well as enslaved Carthaginians being forced to aid in the innovation of modern warfare. To even the odds, the Americans attempt to ally with transplanted Romans, who are iffy on the idea of abolishing slavery. This book is the first to spark off the next portion of the the story, which spans over books 2-4. As a continuation I think it holds up well. We get further expansion on the various characters, both human and alien. The characterization of the American traitor was particularly enlightening, since in the first book we're left to believe he's just a jerk who wants to be in control. Overall, a great next addition for the series.

Good sequel but slow to get going

IMHO this was not as good as the first book. I thought it took too long to get going. The 2nd half of the book was great but the first half was very slow. I am not sure i will continue with the 3rd book.

This Review Needs a Title....

Not as good as book one as the Union soldiers stranded on a strange planet are betrayed by one of their own, need to develop fighting ships and have to form an alliance with other displaced people from history.. Quite a slow book, following on from Rally Cry--it goes 19 hours, quite a long commitment. I wonder if the story is going anywhere in the nine book series...or just same-same?

I own the whole 9 book series. Was glad to find it on Audible. It has been over a decade since I had read it last. Great characters. The narrator is worth his weight in literal wealth. Voice variety kept the characters apart. I wish that Audible had the whole 9 books available. I'll be happy wit whatever they do have.

I could hardly put it down, even though it's almost depressing with how much adversity there is.
Amazing book, get it if you liked the first one.