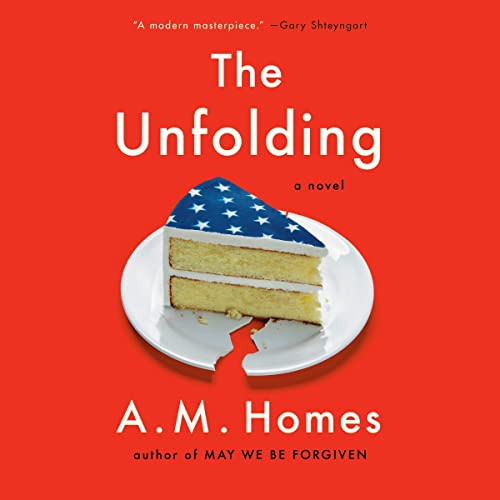 "A dazzling portrait of a family—and a country—in flux…The Unfolding is hilarious and shocking and heartbreaking and just a little bit deranged—in other words, it’s a book that feels like what it feels like to be alive right now."—Nathan Hill, author of The Nix

“Gripping, sad, funny, by turns aching and antic and, as always, exceedingly well-observed and -written.”—Michael Chabon, bestselling and Pulitzer Prize-winning author of Moonglow and The Amazing Adventures of Kavalier & Clay

In her first novel since the Women’s Prize award-winning May We Be Forgiven, A.M. Homes delivers us back to ourselves in this stunning alternative history that is both terrifyingly prescient, deeply tender and devastatingly funny.

The Big Guy loves his family, money and country. Undone by the results of the 2008 presidential election, he taps a group of like-minded men to reclaim their version of the American Dream. As they build a scheme to disturb and disrupt, the Big Guy also faces turbulence within his family. His wife, Charlotte, grieves a life not lived, while his 18-year-old daughter, Meghan, begins to realize that her favorite subject—history—is not exactly what her father taught her.

In a story that is as much about the dynamics within a family as it is about the desire for those in power to remain in power, Homes presciently unpacks a dangerous rift in American identity, prompting a reconsideration of the definition of truth, freedom and democracy—and exploring the explosive consequences of what happens when the same words mean such different things to people living together under one roof.

From the writer who is always “razor sharp and furiously good” (Zadie Smith), a darkly comic political parable braided with a Bildungsroman that takes us inside the heart of a divided country.

Worst book I have ever listened to…

Got about 40% through and stopped. Story is just not that interesting or compelling. Thought it would have more meat on the bones.

The story had potential to be so much more. It was decent at times but overall dull, and an absolutely terrible ending.

Unnecessarily long and not a satire

I suppose if satire hits too close to the truth then it’s not really satire and that’s what I feel happened here. Additionally, the book takes a long and largely futile time to get to the point. One character/storyline was wholly unnecessary, the dialogue was awkwardly stilted in some places, and in the end there are to many players involved in the central plot. I would not have read to the end. This should have been a short story or novella.