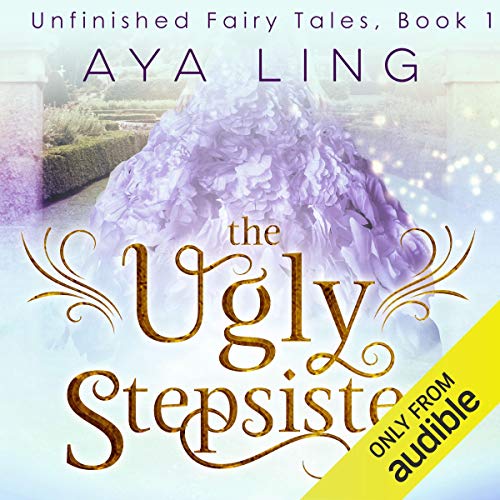 What if you are trapped in a fairy tale book?

When Kat accidentally rips apart an old childhood picturebook, she's magically transported into the world of Cinderella - as Katriona, one of the ugly stepsisters! To get back, she'll have to complete the story, right to the end of happily ever after. But the odds are huge: The other stepsister is movie-star gorgeous, the fairy godmother is nowhere to be found, and the prince isn't interested in balls at all. Can she ever return to the real world?

A cute story but I feel a bit robbed and confused

******SPOILERS********
I understand that I am an adult who is reading a young adult novel and that alone may influence how I feel about the ending but I am disappointed. The story was engaging and interesting and the heroine was a very likeable character. I even was pulling for her the entire time to fall in love with the Prince but once I got what I wanted in the ending, the author immediately stole it away from us.

The main character Kat gets sucked into a story book and becomes one of Cinderella's step-sisters. She alone knows that this is a book and is tasked with making the entire story come true with very little help and none of the plot set up for her in advance. She works hard at social reform and in the process catches the eye of the prince. Long story short, she falls in love with him and he loves her in return. They marry and as soon as they say " I do" she goes back to her world. I was angry about this. I had a feeling that no time would have passed in the real world once she completed the story but I was hoping that she would actually get to live out the life she planned with the man she loved enough to marry and actually get to retain those memories when she returned. (Sort of like in the lion the witch and the wardrobe when the kids grew old and lived their lives in the other world but still returned as children once they were done) But no. She said I do and was instantly kicked out of the world that contained the man she loved and sent back to her world again to get a date with a cute guy?? That was my consolation prize?? A date with a cute boy after she spent over a year falling in love and planning a life with a man!!

I was just not happy with the last chapter. I feel like it ruined a wonderful book that I didn't want to put down. I'm afraid to read the next book because what if the next people fall in love and forget each other again. My heart can't take it. The story said "...and they lived happily ever after" after the wedding but Kat didn't get to experience or remember any of it. So what about her husband Edward? Did he experience the happily ever after or did his wife's personality change instantly after they married and Kat was sucked back to reality. Or did he cease to exist once the one real person left? And if he did cease to exist, why would she knowingly kill him off by marrying him? ugh!!! I am so frustrated and confused.

Read up to the part that he asks her to marry him and then stop. You will be happier imaging your own ending. 😒

Hope the next one comes out soon. Absolutely loved this book!!! It's a must read.

this book was absolutely amazing
must read for anyone who cherishes a good fairy tale!

I love fiction based on fantasy, but this attempt didn't come close. It was a bit "herky-jerky" for a Cinderella story. Keep trying!

This book was amazing and I couldn't put it down. It's totally kept my attention from beginning to end! I loved every minute and didn't want it to end! I can't want to read book two!

Got this on my Kindle Unlimited in audio. I had loaded it a few days ago for when I finished series I was reading until other book I wanted was released. The story was so well done and engaging in couldn't turn it off. I listened to it straight through. I highly recommend!

This is your typical whimsical and inspirational girly flick. I liked how the author tried to make the world and to establish Kat as a “strong, independent, modernized woman.” However, it’s too fantastical and just unrealistic. Yea, I know it’s fiction and Kat gets sucked inside a fairytale book but the author tries real hard to make the world, at best, historically accurate. There’s the typical doing visiting calls, going to shops, embroidery every day shtick woman of olden days went through. That stuff I could believe, the serious stuff they get into later, I just rolled my eyes.


The whole child labor and fixing the law to avoid children dying or getting injured was definitely ideal, not just in Kat’s world but in real history. However, Kat’s world did not draw out the negative consequences. Supposedly kids work to get money and they do 16 hours a day or so. Kat essentially makes a new law saying kids should work 8 hours. It doesn’t pass the first time through parliament but that’s expected. Yet, it gets majority vote the next time. Ok, perhaps with good momentum and campaigning, that could happen. BUT I expected some backlash from the business owners. Not some flippant or weak backlash but pure anger and even hatred. The evil mob mentality thing. If I was a business owner at the time, supporting child labor and not caring if children die in my service, I would fight the amendment. Harsh business owners would rally other harsh business owners and cause trouble for those who made the new amendment. THIS drama, in my opinion, is the good stuff that really identifies the heroes and villains. To continue, the class divide is apparently prevelant during this time period of the book too. Rich people don’t care about poor people, especially kids. The book says royalty has no real power either so most likely, the rich dominates parliament. If a new bill threatens your wealth and income, essentially your livelihood, there would be negative consequences. That’s just how life works!
In addition, there is no mentioning how less hours would affect the pay of the children. Do they get less wages since they’re working less? Is the 8 hour work day even possible to support a whole family? Essentially, Kat wants no kid to work but how in the hell will that help poor families survive? The kids work their butts off to help their families so if you strip them of their jobs completely with no mention of any support system, you’re making everything worse!

Another thing I had trouble with was Kat’s idea of marriage. Historically speaking, yes, eloping would cause scandal and shame. Being such an avid reader, Kat should’ve realized it wasn’t just a small thing but it was a very, VERY serious matter. She even references Pride and Prejudice a couple times and in that book, Lydia’s elopement was HUGE. It could’ve affected the marriage changes of the other Bennet girls and ruined the family. Why? Scandals ruin reputation and if you wanted to marry up into the world, you don’t want everybody gossiping about your family. Marrying down in the world can even lead to social ostracism because of class divide. The book leans too heavily on modern ideas when it is set in a not-modern world that valued reputation, avoided scandals, and (again) had a predominant class divide. Kat treated Poppy’s elopement idealistically and she should’ve expected some sort of punishment. When Lady Bradshaw “grounded” Kat to her room—rather tame punishment if you ask me—Kat was melodramatic and all teen angst. Her defense against running away from home was “I wrote a note.” Wow, what a “strong” heroine we have here. Even the prince supporting the elopement was far fetched. Him doing that would encourage Kat to dirty her own reputation for supporting the elopement and that could’ve caused the King and Queen to reject her as a daughter in law. At best, they would’ve disapproved of her. Remember, class divide! Reputation! The toffs and their belief they’re better than everyone else! History!!!

I understand the author’s intent with the story but it falls flat, oh sooo flat, with the consequences. If you can overlook those flaws, then this book is your typical teen Disney-esque book with lots and lots of youthful ideals, hopes, and dreams. But if you want a down to earth realistic rendition of Cinderella, like this book intended, this isn’t the book for you. Heck, that Australian transfer student in the beginning lost his accent at the end of the book so if you’re expecting consistency, then look elsewhere.

This is one of my favorite retellings of Cinderella! I recommend this book to anyone who loves fairytale retellings.

I was nervous seeing as this book is available only through audible. but I loved it. I will definitely read more by this author.

I love a good retelling, but I really love how this was a retelling about inner beauty and how one person with some courage can make a difference.