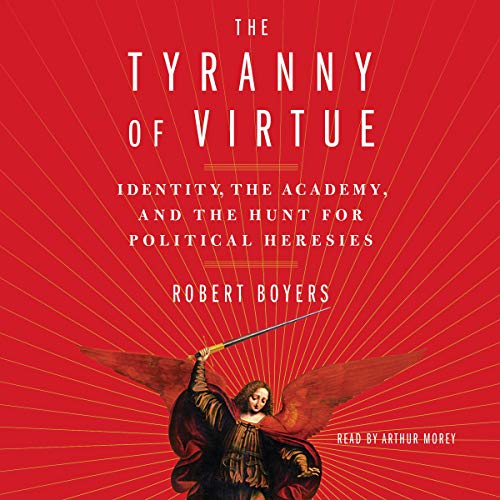 The Tyranny of Virtue

Ten linked essays from public intellectual and professor Robert Boyers that elegantly and fiercely address the most relevant and controversial ideas of the day - from identity and privilege to appropriation and diversity - and advocates for loosening the straightjacket of the new liberal orthodoxy.

Written from the perspective of a liberal intellectual who has spent a lifetime as a writer, editor, and college teacher, Robert Boyers’s book is a precise and nuanced insider’s look at shifts in American culture - most especially in the American academy - that so many people find alarming. Part memoir and part polemic, an anatomy of important and dangerous ideas and a cri de coeur lamenting the erosion of standard liberal values, Boyers devotes chapters to such subjects as tolerance, identity, privilege, appropriation, disability, and blaming the victim. And then he asks why it is that many educated persons are today more committed to “safe spaces” and “comfort zones” than to the kind of debate that was once a hallmark of the liberal imagination.

Why, Boyers wonders, is the hunt for heresies and so-called “micro-aggressions” a more routine feature of contemporary academic life than the patient analysis of difficult ideas and challenging books? What has brought us to a moment when students are often encouraged to emerge from their studies efficiently indoctrinated with “correct” views that they have not adequately considered or mastered? Can the university continue to do its proper work by creating an us versus them orientation, underwritten by enemies lists and fueled by a sense that no dispute may be tolerated to the current consensus?

A movement to scrub university campuses clean of words, ideas, and subjects that might cause students discomfort has gained momentum over the past decades and is now slowly becoming institutionalized across the country. In The Tyranny of Virtue, Boyers maintains a conviction that liberalism itself is in crisis, and that the attempt to understand the ordeal of a venerable liberal intellectual can illuminate the roots of the crisis. The end result is a finely tuned work of cultural intervention from the front lines.

This isn't a story

so I don't know why you are asking me to review it as such.

This is a serious study of the effects of mob politics on University and other institutions. What we call PC has morphed into something more lethal.

Anyhow Professor Boyers does a passable job describing how mob led political culture started and how it developed.

I used to read Robert Boyers when I subscribe to Salmagundi journal which he edited I stopped many, many moons ago.

Prof. Boyers hasn't changed much from the scholar I used to read. The problem is that Campus politics has changed for the worse and playing an unaffiliated liberal doesn't work anymore if you want to take back the campus from the students (I call then His/her majesty's baby--a notion Freud came up with when describing spoiled brats who always need to have their way.)

I recommend this serious study with some reservation. At one point he wanted to show his liberal non attachment to any ethnic group and by way of example he used the treatment of Hannah Arendt by the New York intellectuals. This was a wrong choice it might have worked better had he chosen the Publication of Philip Roth's "Portnoy's Complaint," since Arendt tendentious reporting of the Eichmann Trial was so full of holes that it's read today merely as an example of how warped Arendt's vision was.


Boyer's must have been a teenager when the trial took place and hence he doesn't understand that the passions it unleashed had to do with the fact that Eichmann behavior during during the Holocaust was still raw in many people's mind. Besides it's been shown by Deborah E. Lipstadt in her book "The Eichmann Trial" that Arendt only attended a few sessions of the trial because she flew to Germany to visit her former teacher Karl Jaspers. Prof. Boyers gave no sign that he knew that. (btw Lipstadt's book is available at Audible.com)

Arendt was not a reporter and she was not a Jurist nor was she an historian she was a political philosopher and as such wrote some important essays on philosophical subjects.

Boyer's should have done more research on the subject before using it as his example.