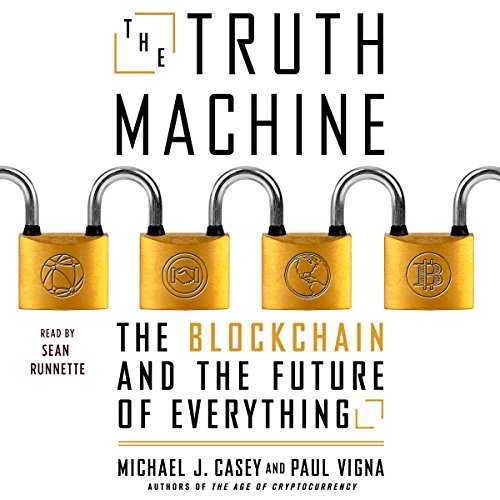 "Views differ on bitcoin, but few doubt the transformative potential of Blockchain technology. The Truth Machine is the best book so far on what has happened and what may come along. It demands the attention of anyone concerned with our economic future." (Lawrence H. Summers, Charles W. Eliot University Professor and President Emeritus at Harvard, former Treasury Secretary)

From Michael J. Casey and Paul Vigna, the authors of The Age of Cryptocurrency, comes the definitive audiobook on the Internet’s Next Big Thing: The Blockchain.

Big banks have grown bigger and more entrenched. Privacy exists only until the next hack. Credit card fraud is a fact of life. Many of the “legacy systems” once designed to make our lives easier and our economy more efficient are no longer up to the task. Yet there is a way past all this - a new kind of operating system with the potential to revolutionize vast swaths of our economy: the blockchain.

In The Truth Machine, Michael J. Casey and Paul Vigna demystify the blockchain and explain why it can restore personal control over our data, assets, and identities; grant billions of excluded people access to the global economy; and shift the balance of power to revive society’s faith in itself. They reveal the disruption it promises for industries including finance, tech, legal, and shipping. Casey and Vigna expose the challenge of replacing trusted (and not-so-trusted) institutions on which we’ve relied for centuries with a radical model that bypasses them.

The Truth Machine reveals the empowerment possible when self-interested middlemen give way to the transparency of the blockchain, while highlighting the job losses, assertion of special interests, and threat to social cohesion that will accompany this shift. With the same balanced perspective they brought to The Age of Cryptocurrency, Casey and Vigna show why listeners must care about the path that blockchain technology takes - moving humanity forward, not backward.

This a was a decent follow up book to the authors previous blockchain book. The authors are clearly Bitcoin Maximalists so they repeatedly point to Bitcoin Lightning Network as a solution for all. Unfortunately, the authors couldn’t stop bringing up politics and their anti-Trump leanings.

Very opinionated book. No mathematical explanation of Blockchain. Nothing about previous historical attempts of implementation of blockchain, like as everything started several years ago with BitCoin. The narration voice in the audiobook is very monotone. Author reads hash values, 64 characters per each one which takes a long time.

The authors of this fantastic book, Michael Casey and Paul Vigna, did a wonderful job researching how Blockchain technology is being implemented in the real world today and what might be in store in the not-so-distant future of our digital world. This book is a must read for all those interested in learning more about how Blockchain technology has the potential to change humanity in a ton of positive ways.

this is one of the best descriptions of the blockchain that I have ever listen to particularly in the first 9 chapters. The only parts you may want to avoid is the political commentary that the authors feed into some of the issues which adds no value to the overall theme of the book. So while the authors hold out blockchain as being the Holy Grail of freedom and decentralised associations they cannot help but to add in their own biases and denigrate various political leaders around the world. save this rhetoric for a book on your own politics and stick to the title of the book in the future.

Yes, I would recommend reading through the first half of the book. It's very detailed in blockchain applications and some brief history. The second half gets to be theoretical and bloated.

Yes, the first half for sure. After that I began skipping parts.

A Hopeful and Brighter Future

This book gave me hope that the new developing technology specially artificial intelligence may be in the control of human beings. I like the idea that we can have more distributed and decentralized power rather than controlled by a central powerful agencies, companies or individual. I dream of a future where we can search in a few seconds the reliability and integrity of any individual or company so we will have transparency as well as privacy. I think this will make us better humans. I can see how block chain technology can do all these as well as the great economic equalizer among all human beings all over the world specially in the under developed countries. I commend the very insightful research of Michael Casey and Paul Vigna.

I sought out this book hoping to learn more about how blockchain technology works. The author did a good job of expounding on the opportunities this technology offers. I have a much clearer understanding of how blockchain works and some of the drawbacks. The author has a vast knowledge of the history and current state of blockchain and I really appreciated getting an insider’s viewpoint. This book was exhaustively researched and has a huge amount of information in it. I was mightily impressed with his thoroughness. I especially enjoyed his discussion of how blockchain could be used to keep any information (not just currency) safe. The potential for uncrackable privacy is exciting. I’m really hopeful that the world may have found a solution that will help reduce theft and disruption through dispersal of information. It’s an ingenious solution: make the data so hard to find and collect that it becomes cost prohibitive to steal. There are so many uses for this technology and I was mightily impressed with the author’s thorough research of all the players and all the different incubator projects and companies working in the blockchain world. He really plumbed the depths of all the work going on right now. Casey did a fine job of showing all the many different ways blockchain could be implemented. I never knew there were so many uses for this technology or that it is being utilized for non-financial purposes in industries such as shipping, manufacturing, construction, retail, government and dozens of other sectors. He waxes on endlessly about how blockchain technology is the cure for all that ails the world. It gets a bit tiring at times, but I do find his pie-eyed enthusiasm somewhat endearing. I particularly enjoyed his discussion on how blockchain could be used to improve the problem of personal identification. This is a huge problem in the developing world and there are some fascinating new ideas for detaching the system of identification from governments and big business. There was so much good about this book, but unfortunately, the author is such a fanboy that he tends to gloss over criticisms of the technology. He continually makes summary judgments on the nefariousness of the major institutions of the world: all governments are out to control us, all corporations are evil, all those with power are greedy, etc. There are good and bad things about these entities and his heavy-handed dismissal of these institutions got a bit tiring. I can appreciate his libertarian mindset but it tends to blind him to the finer points of the opportunities and drawbacks of blockchain. The characters and institutions in the book tend to be portrayed as either heroes or villains. Casey pays less attention to the gray areas that are the most interesting components of this debate. Case in point: he dismisses the entire advertising industry as a greedy manipulator hellbent on mind control. Sure, there’s a lot of annoying advertising, but that advertising bankrolls free access to content. He’s so busy blasting authority that he neglects to explain how average people will pay for content if advertising goes away. He touched on this briefly, but I wish he had spent more time explaining the downside of blockchain, for example: crime. It seems as though cryptocurrency has been a catalyst for scammers, drug dealers, oligarchs and all the evildoers in the world. Blockchain cuts out middlemen, distributes power and increases efficiency. This is fantastic as long as the people using the system have upright intentions. But what happens when those with nefarious purposes are given an uncrackable, highly flexible tool that can effortlessly move funds and resources across borders without a trace? It’s going to bring a whole new level of creativity and efficiency to activities such as extortion, bribery, corruption, drugs and a spate of other crimes. Our current financial system has a lot of downside, but it does attempt to curtail the villains of the world. I was hoping for a more balanced discussion of this issue. His rose-colored glasses kept him from a frank analysis of some very thorny problems we’ll need to work out. I get it, free markets are great, but there’s a real downside to them too. I felt as though a deeper understanding of this issue conflicted with his worldview. Unfortunately, the reader's performance was quite wooden. I think this book would have been better had a different reader been used. I’m really glad I read this book. It was a bit tedious to get through, but I learned so much.

No denying the future

Okay so I firmly believe we are headed in a direction at a lot fast pace now than ever in human history and the blockchain is the vessel to guide us there. With or without this book there is no denying this fact after wrapping your mind around it. Some amazing some dark, that comes with every invention. But this can be of great honest use between us and machine.

this book provides a good explanation of blockchain but the arguments and reasoning are so bad, it was tough to finish.

Good positioning and explanation of potential of blockchain in political, historical, legal and ethical context of our time! Peter Reuschel