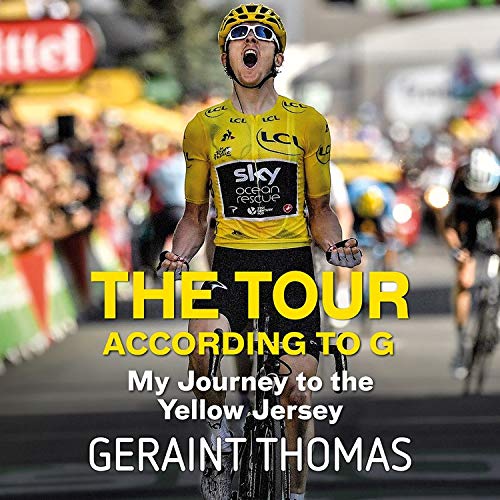 The Tour According to G

For years Geraint Thomas appeared blessed with extraordinary talent but jinxed at the greatest bike race in the world: twice an Olympic gold medallist on the track, Commonwealth champion, yet at the Tour de France a victim of crashes, bad luck and his willingness to sacrifice himself for his teammates.

In the summer of 2018, that curse was blown away in spectacular fashion - from the cobbles of the north and the iconic mountain climbs of the Alps to the brutal slopes of the Pyrenees and, finally, the Champs-Elysees in Paris.

As a boy, G had run home from school on summer afternoons to watch the Tour on television. This July, across 21 stages and three weeks, and under constant attack from his rivals, he made the race his own.

With insight from the key characters around Geraint, this is the inside story of one of the most thrilling and heartwarming tales in sport.

Not only can nice guys come first - they can win the biggest prize of all.

Not a fan of GT but really enjoyed the book

Tom Fordyce wrote the book and you know this because 1, they credit him and 2, if Gerraint wrote it then every sentence would start “phwooargh... I dunno....like.... yeah....nah....”

So we’ll done everyone cause I love cycling but Gerraint has never captivated me as Froome or Nibali, Sagan or even Simon Yates. He is still a brilliant athlete and his story in this book is the best I’ve ever read. Miles better than the efforts of Froome or Wiggins and miles miles more engaging than Cadel Evans’ book or Chris Boardman’s.

There is something genuine about the description of what went on during the Tour, there is very little on useless things that happened when he was a kid (as often happens in biographies). This book is a traight to the race and the drama and delivers on what the title of the book is selling.

I have already read it twice and the audiobook is fantastic- the reader is a voice-a-like in the same way Wiggins and Froome’s books were read. The reader is excellent and really gives a sense of Geraint. I was very impressed.

Absolute 10 out of 10, I kind of wanted Dumolain to win but Thomas showed that hard work beats everything.

I enjoyed the book very much as a long time fan of him. The insights of the tour at the time. It seem like they never fill in the details while you are watching the coverage. This book did that and was very satisfying as to the details of that Tour. Thanks for filling in the details from a Tour watcher!

Great content but the narrator leaves much to be desired

Geraint has an amazing story! Too bad they didn’t choose a better narrator. Each paragraph is a huge run on sentence. Not much inflection and a very difficult listen.