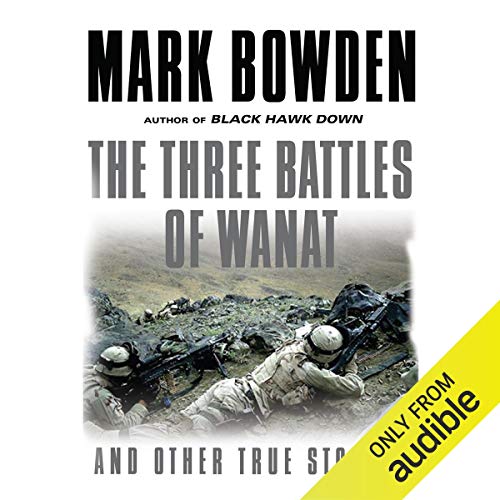 The Three Battles of Wanat and Other True Stories

New York Times best-selling author Mark Bowden has had a prolific career as one of America's leading journalists and nonfiction writers. His new collection, The Three Battles of Wanat and Other True Stories, features the best of his long-form pieces on war as well as notable profiles, sports reporting, and essays on culture.

Including pieces from The Atlantic, Vanity Fair, The New Yorker, and The Philadelphia Inquirer, this collection is Bowden at his best. The titular article, "The Three Battles of Wanat", tells the story of one of the bloodiest days in the war in Afghanistan and the extraordinary years-long fallout it generated within the United States military. In "The Killing Machines", Bowden examines the strategic, legal, and moral issues surrounding armed drones. And in a brilliant piece on Kim Jong-un, "The Bright Sun of Juche", he recalibrates our understanding of the world's youngest and most baffling dictator. Also included are profiles of newspaper scion Arthur Sulzberger; renowned defense attorney and anti-death-penalty activist Judy Clarke; and David Simon, the creator of The Wire.

Absorbing and provocative, The Three Battles of Wanat is an essential collection for fans of Mark Bowden's writing and for anyone who enjoys first-rate narrative nonfiction.

War story gets bogged down in the swamp

I was enjoying this well-written account of US military and anti-terrorism exploits until it took an unexpected left turn and morphed into a fawning love note to Joe Biden. So, I guess if you are a Hillary-style democrat you might want to check this out. For everyone else (who would rather just read about the subject matter without having to hear even more about self-aggrandizing politicians such as Obama and Biden) I would recommend choosing another title.

Most of the book was about other topics than Wanat. Not impressed. Waste of money IMHO

a collection of magazine articles that have nothing to do with the title. don't waste your time.

On this book I was to bed.

Stay away from this book, it DOESN'T belong in the military history section. I want my $$ back.

all over the place

the title is deceiving.....doesn't really cover the battles couldn't make it all the way through

I thought this book was about the war in Afghanistan but it turned out to be a series of stories that were seemingly unrelated. It was a good book and I finished it but I was definitely sold on one thing and given another.

If you could sum up The Three Battles of Wanat and Other True Stories in three words, what would they be?

If you’ve listened to books by Mark Bowden before, how does this one compare?

I work nights in a warehouse. This was great to get me through the night,

Not what I thought it would be

I did not like this book, it was not his best work. honestly it felt like a lazy attempt to fill space by using other works.