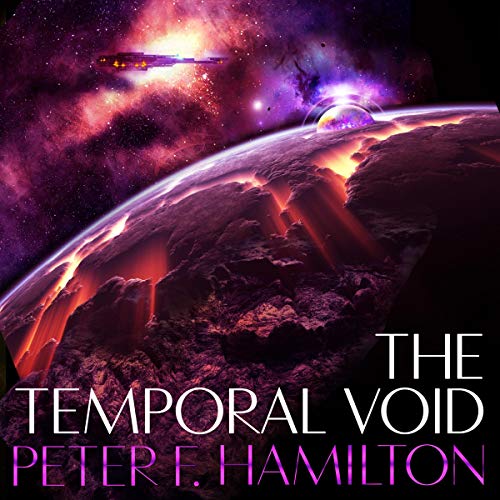 From one of the world's best-selling science-fiction writers....

The Intersolar Commonwealth is in turmoil as the Living Dream’s deadline for launching its Pilgrimage into the Void draws closer. Not only is the Ocisen Empire fleet fast approaching on a mission of genocide, but also an internecine war has broken out between the post-human factions over the destiny of humanity.

Countering the various and increasingly desperate agents and factions is Paula Myo, a ruthlessly single-minded investigator, beset by foes from her distant past and colleagues of dubious allegiance...but she is fast losing a race against time.

At the heart of all this is Edeard the Waterwalker, who once lived a long time ago deep inside the Void. He is the messiah of Living Dream, and visions of his life are shared by, and inspire billions of humans. It is his glorious, captivating story that is the driving force behind Living Dream’s Pilgrimage, a force that is too strong to be thwarted. As Edeard nears his final victory the true nature of the Void is finally revealed.

Great book but parts are not in the right order

Be aware that on Android, high quality version is not in order (maybe other versions are too) part 3 is after part 1. Then part 2.

This book is corrupted

This is a favorite book of mine, I have listened to it several times. I re-downloaded recently, there are now large chunks missing, including the end

Better than any of the faller shite

If you can stand the retro-ish adulation of Hamilton's of anything old-fashioned, be it social structures, clothing, vehickes, weaponry or building, you'll propably like the space operaey bits of the book. My beef with Hamilton is the fetishising of ye old English Class Society and its strata and outerly manifestations. Especially when it comes to wasting literally hundreds of pages of writing Downtown Abbey in a supposedly Sci-Fi novel. Hate it. Absolutely detest it.

However, when he focuses on the futuristic aspects of his novels, grandiose plots, clack and dagger scheming between factions, and spectacular space battles using world-devouring weaponry he is stellar. Describing gritty insurgency by a people suddenly occupied by a feverishly cultist faction is spellbinding.

So all in all, I seem to have a love-hate relationship with Hamilton's writing. My sincere recommendation is to delve into his complex worlds and labyrinthine way pe waiting in this form. The Reader here does a very good job of making the text come to life .

Having spent the better part of the year of ploughing through Night's Dawn trilogy, I decided to give these a go as audiobooks. Definitely easier. Yes, you do have to rewind often to stay on track with all the plot-twists and the plethora of characters and their motivations, but it is far less stressing than reading it your self.

So recommended and also warning to stay away from Hamilton as well. A completely schitzoid writer that Hamilton, yes. But I love to hate him.

This was a confusing listen as the continuity jumped back and forth. Please fix it.

Again, Peter F Hamilton produces stories that makes to stick a headset into your ear wherever you go. The narration by John Lee is better than the previous book, in my opinion, and makes it fairly easy to keep track of who's talking to who.

Now, off to the next part and hope it won't fall flat on its own grandeur.

This was my fifth very lengthy title by Peter Hamilton, all of which in the same universe, and I have to say, this is the best one so far! And the rest got 4 stars from me as well, mind you.

This second novel in the Void trilogy really deepens both stories of this novel-within-a-novel, in an exciting way. There's the scifi story with several well-loved characters, and then of course there's the fantasy novel about Edeard, living his life on a planet in the Void.

The climax near the end of the novel is awesome, I have to say I thought "OMG Hamilton pulled a Game of Thrones!"
And as if that weren't enough, he also manages to add a third (sub)genre to this one novel, namely the superhero archetypal story. And there was even a hint of Western this time. I loved it, it was so well done!

This story has everything I want from my novels: a thrilling plot, my three favorite genres, well fleshed-out characters, romance, adventure, high tech, magic, and some very, very skilled writing.

Narration, as always with John Lee, was absolutely superb.

This series has been great! The commonwealth is an awesome look at the potential of Mankind!
A truly great writer and a gray story!

has opened my mind to news ideas, I will recommend this to all my friends with similar interests.

Horrible production of a decent book

If you like Peter F. Hamilton this is as good as it gets, and the narrator is quite okay too, but the production stinks and I gave up completely after 40 minutes. The volume is extremely uneven. If you adjust it for one recording section then all of a sudden you can't hear what's being said in the next section, raise the volume and then you'll go deaf 30 seconds later. Audible should really screen the books better to avoid selling crap like this.

First of all the story is really great and I definitely am encouraged to listen to it further , if the audio quality wouldn't be so bad. The volume changes multiple times so much that you steadily have to adjust the volume because either you can't hear anything or it is to loud. additionally the voice is constantly distorted because of the bad overall quality . I really wished I could hear it further but I had to stop after a few hours cause my ears were hurting and I was annoyed by constantly adjusting the volume

I am a fan of Peter F. Hamilton and enjoyed his books also those read by John Lee
This recording is the worst I ever had
Loudnes changing coonstantly and all with a very bad overall sound quality
I do not understand how such a recording can make it into the market and onto audible

Great continue of the story

This second part of the series is a great thrilling and enjoyful read that is at least as good if not better than the first part.