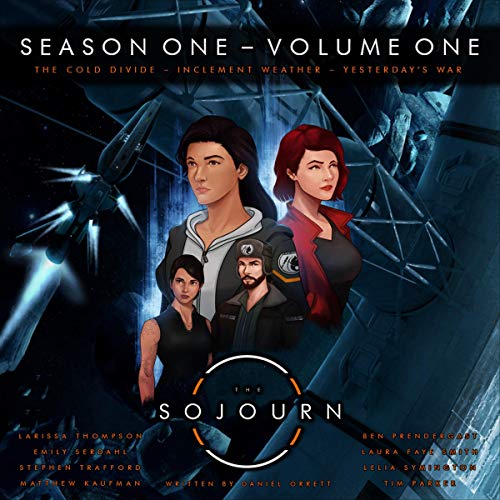 The Tantalus Cluster is the fragile cradle of humanity.

Adrift in the divide between galaxies and surrounded by the vast emptiness of the intergalactic void, the Tantalus Cluster is the only home humanity has ever known.

Desperate and facing starvation, humanity’s only hope is a strange nebula that has suddenly appeared beyond the edge of the cluster. Its shifting clouds may hide a source of salvation for the people of Tantalus, but time is running out.

Signing on to the ambitious Avalon Expedition, Privateer Captain Cassandra Farren will face the shadows of both the past and future as she leads her small crew into the unknown in a last, desperate bid for the survival of the human race.

Directed and produced with careful scientific consultation, The Sojourn captures every detail of life aboard ship, from the sounds of the smallest airlock seal to the largest space battle. Featuring a full cast of veteran voice actors, backed up by high-quality sound effects and an epic original soundtrack, The Sojourn is a unique and striking audio experience.

the best thing I've listened to in 2020. asides from the authors YouTube channel Spacedock.

One of the best audiobook that tackles sci fi. It was well thought out and executed. I will await the next one with bated breath!

Well written and well developed sci-fi series. Manages to subvert expectations without throwing out the baby with the bath water

Are you a fan of great science fictions series like The Expanse and Battlestar Galactica? Then give this series a listen and thank me later.

A few flaws, but worth it at a low price.

This book is a bit spare, I think the length really lets it down. The low price I paid is a redeeming factor but to get the full background information you'll have to watch a few videos on the YouTube page. The story itself seems like something decent and worthwhile. There are some baffling story choices, while I understand there needs to be room for the main cast to breathe, some things just confuse me. There will be some story points ahead. The long and short of it is that it a fair purchase and a good story.

The main platform which houses the director only seems to have one weak and wimpy Lieutenant as a military liaison. I don`t understand how the most important command section doesn`t have reserve command personnel, or any major military presence at all really. I could hand wave this away except for who commands the station, I will come back to this later.
I enjoyed the "production" values, the audio parts were crisp and I never felt confused by any of the sounds. The actors spoke well, but some dialog was weak. As for the characters there are only a few, not that there is any room for more. The length of the book hobbled any interest building character development, for me. I will buy the upcoming books to see the improvements in the story.

The pilot, who I will call the Mustard King, is my favorite. I suspect Mustard King is going to be a lot more than some maverick pilot, I think he has killed people in battle, but hides this to be cool. People don`t just git gud at flying military attack corvettes in peace time.

The worst character by far is Elizabeth, I despise these types of characters. For some one so allegedly important she has only been assigned a wimpy Lieutenant and no jack-booted hard men, The lowest minster in my country has a convoy of police for protection, not the nice type of police either. This is in a country that only has mild hatred for government officials. Not on a multi-national fleet that was at war not too long ago. When the fleet jumped to a hostile place so far from home return was impossible, she was whinging that the bar was not open. Instead of establishing a picket for security she was whining that couldn`t smoke on a spacecraft. She is not any sort of leader I would ever count on.
Your team leader is quite often a funny man, your direct Supervisor may tell a joke here and there, you would never hear anything but the most HR approved jokes from your CEO at the start of a meeting the one time a year you see him. I have never worked for a company that ever deviated from this.

There only only four other persons of note;
Wimpy Lieutenant, he needs to go back to the pencils he was pushing and order a pair of big ones. I hope he gets stronger as a man. his wiki page says he is a relationship with "Alex" (Alex's gender is (likely deliberately) left ambiguous.) If he is gay why would he be sent on what would amount to a military colony fleet? If the fleet got stuck(as it does) the would what people willing "to do their part for the species" and no genetic dead ends.

Black Female Space Captain, she was such a minor part of the story, She died honorably as I would expect a military officer to do. She was a minor plot device more than a character.

Anxious Captain, the captain is still sad that she wasted terrorist scum while in a war. She fought on the side of corrupt city dwelling fat core people. After she left the army, despite having confirmed psychological problems over the killing she did in wartime. She decided to go down the road of peace by becoming the captain of a mercenary warship are continuing the killing, but for pay. Elizabeth decides that unhealed PTSD makes her the best candidate for overall military command of the most important expedition in human history, into a hostile area of space where resupply and reinforcement is impractical.

I haven`t spoken about the Xenos yet as they are intermission characters and will need more story time next book.
But I will tell you now. The filth of the alien must be exterminated to preserve the purity of the Human race, lest we degenerate into abomination. He who allows the alien to live shares in the crime of its existence! There is no place for the weakwilled or hesitant. Only by firm action and resolute faith will mankind survive. No sacrifice is too great. No treachery too small. THE EMPEROR PROTECTS!

There are mainly women in the cast, I hope they add a few male characters to balance things out. Mustard King won`t be able to carry the manly aspect of the story until Wimpy Lieutenant gets the big ones delivered.

The book is worth a buy despite my gripes.

This is a bold, new sci-fi drama told in fashion of early radio dramas. The universe created by the Spacedock team is gritty and realistic. I cannot wait for more volumes.

Also: don’t buy this on Audible, go get this off of a different platform that actually supports artists. Audible’s treatment of the Spacedock team is nothing short of criminal.

Idk what I was expecting when I started this this series. But oh my goodness.

My first impression on this audiobook is that this is not a book! This is a full on TV series! Every character is voiced by different people, every environmental background sound, walking boots, missiles firing, button tapping, electronic beeping can be heard clearly. wow! it blew me away. I never knew audiobook can be presented in this format. Now I kinda want audiobook have this high quality. and it has a full orchestra for the music! wow! The story wise is a good start, conflict between human factions, a serious threat about food shortage, some glimpse on the alien culture. this is only the start of the story, so I will wait for more episode before I fully review the story. Just some critics on this new format of audio book: Sound effects: Sometimes environmental background sound effect kinda went over than the conversation. Not necessary louder, but enough that I missed some words the characters are saying. Hope the background sound effect/ music can be separated more with the conversation in he future. Narration: It would be nice to add in some narration to describe the scene a bit. The sound designs, voice actors and the dialogs are VERY well done here, I can tell about 85% of what is happening from the boot walking sound, beeping, cup clanking, and how the characters subtly imply or hint on the scene. However, sometimes I really hope for a narrator to just narrate the scene out. I remember a character said in awe something about the size of a ship or something, I really wanted a narrator to say more. No need to narrate every scenes, just a few scenes here and there would be enough. voice actors: I don't know why, but sometimes I have trouble telling who is talking, is it the main protagonist? or the leader of the fleet? I myself sometimes am not good at differentiating different people voice in real life, in this type of presentation, it is hard to determine who is talking. A single, good narrator like Michael Kramer has the uncanny ability to subtly voice out different characters but we still understand who is who. I don't know why, when there are actual different voice actors, talking, I have difficulty telling who is who. maybe the narration of "A said, B said" might alleviate this situation. Can't wait for the next episode.

Great production and an enticing start!

The Sojourn creates a riviting Sci-fi universe in its first outing.
The voice acting and production is top notch.
This first part certainly leaves you wanting more.