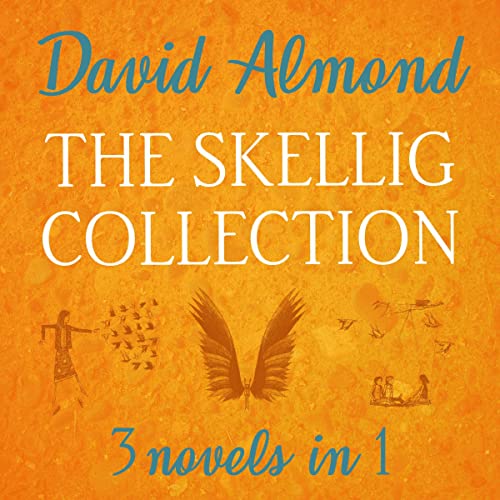 A beautiful audiobook collection of three novels by classic children's author David Almond. This collection includes Skellig, the haunting novel that launched David Almond as one of the best children's writers of today. Winner of the Carnegie Medal and the Whitbread Children's Book of the Year Award.

When a move to a new house coincides with his baby sister's illness, Michael's world seems suddenly lonely and uncertain. Then, one Sunday afternoon, he stumbles into the old, ramshackle garage of his new home and finds something magical. A strange creature - part owl, part angel, a being who needs Michael's help if he is to survive.

With his new friend Mina, Michael nourishes Skellig back to health, while his baby sister languishes in the hospital. But Skellig is far more than he at first appears, and as he helps Michael breathe life into his tiny sister, Michael's world changes forever....

My Name Is Mina

There's an empty notebook lying on the table in the moonlight. It's been there for an age. I keep on saying that I'll write a journal. So I'll start right here, right now. I open the book and write the very first words: my name is Mina and I love the night.

And so Mina writes and writes in her notebook, and here is her journal, Mina's life in Mina's own words: her stories and dreams, experiences and thoughts, her scribbling and nonsense, poems and songs. Her vivid account of her vivid life. In this stunning book, David Almond revisits Mina before she has met Michael, before she has met Skellig.

In this stand-alone novel, Erin, January and Mouse live in a children's home, Whitegates. They often dream of escape and frequently journey into the outside world. Running away is something they know all about. But this time January builds a raft, and the three of them head precariously down river. Towards the Black Middens. This time they might never come back.

When they stumble across a disused factory and its strange inhabitants - Grampa and Heaven Eyes - they wonder if they'll even have the choice. Heaven Eyes is the girl who should have drowned at sea. The mysterious girl desperately searching for her family, hoping that these three might be the family she has lost. She has a secret history only Grampa knows. And does he trust these three invaders enough to tell them?

Erin feels a sisterly responsibility for Heaven Eyes, Mouse longs to belong anywhere and anyhow, but January thinks Grampa's a murderer. Whatever happens, all three have a part to play....