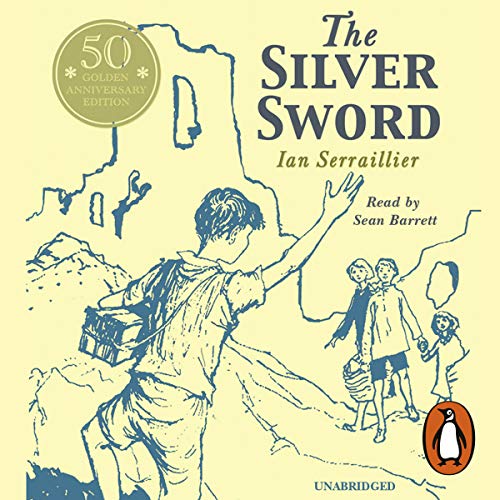 The classic tale of a journey through war-torn Europe.

Alone and fending for themselves in a Poland devastated by World War Two, Jan and his three homeless friends cling to the silver sword as a symbol of hope. As they travel through Europe towards Switzerland, where they believe they will be reunited with their parents, they encounter many hardships and dangers. This extraordinarily moving account of an epic journey gives a remarkable insight into the reality of a Europe laid waste by war.

From 11 February to 30 October 2011, The Silver Sword will feature as one of five books in the Imperial War Museum exhibition Once Upon A Wartime: Classic War Stories for Children.

"Rascal Jan" is a little boy preternaturally skilled at picking pockets, "organizing" supplies, and befriending animals. Beneath the hard shell of experience that living through World War II in Poland has forced on him, he retains part of his true boyish nature. The three children of Joseph Balicki, twelve-year-old Ruth, eleven-year-old Edek, and three-year-old Bronia, also experience omnipresent danger and premature responsibility as they try to survive on their own in occupied and war-ravaged Warsaw. After the first five chapters depict the attempts of Joseph Balicki, the father of the children, to escape from a Nazi prison camp in the snowy Polish mountains so as to be able to return to Warsaw where he believes his family is waiting for him, Ian Siraillier's novel The Silver Sword (1956) recounts the story of the children's extraordinary attempts to reunite with their sundered parents.

The novel is a concise epic of a World War II era story, mostly from the point of view of children. Seraillier tells a tale full of suspense and vivid historical details, but also takes time to provide comic relief, especially through Jan. Seraillier movingly depicts the harmful and traumatic effects of war on children, how it messes with their memories and personalities and prematurely ages them through privation and danger and grief and too much responsibility. The child characters, little Bronia, wild Jan, ethical Edek, and mother-by-necessity Ruth all feel like real children forced to adapt to life in wartime. Without showing any battles, the novel reveals the insanity of war by which entire cities are reduced to rubble, parents and children lose each other, and people of different countries are fighting each other to the death one moment and working together to build a village for orphan children the next. Jan's feral hatred of all soldiers, be they German, Russian, or American, is telling. He cannot trust any of them, regardless of what side they are on, because he has learnt that being a soldier involves brutality and cold adherence to rules. Luckily for the children, kind people do exist in wartime, even, occasionally, soldiers. Several moments in the novel induced me to sob and smile at the same time.

The reader, Sean Barrett, does a great job, his rich and clear voice sensitive to the spare beauty of the text and to the powerful emotions of the children. I even got a kick out of his "American" English for the American soldiers.

People interested in historical war stories told from the points of view of children would find The Silver Sword of great interest (though many of the more gruesome and terrifying facts of war like corpses and rape are elided). Child readers would be absorbed in it without being traumatized. I only wished it had lasted longer.

Thank you, Sean, for bringing this book to life through your reading! I have read this book many, many times to my students and it was nice to hear someone else read it. Each time I read The Silver Sword I wonder if it will still effect me in the same way and sure enough, I get tears in my eyes when I reach the end. My wish now is that it would be made into a movie!

I loved this book as a child

This was a book that I read many times as a child and it was really fun to rediscover it as an audio book. Even though I am older, I still very much enjoyed listening to it. I brought back good memories.

The best and helpful

helped my son to live the story

This was a book I read in 1st form in high school. This is such an inspirational book. I love it!