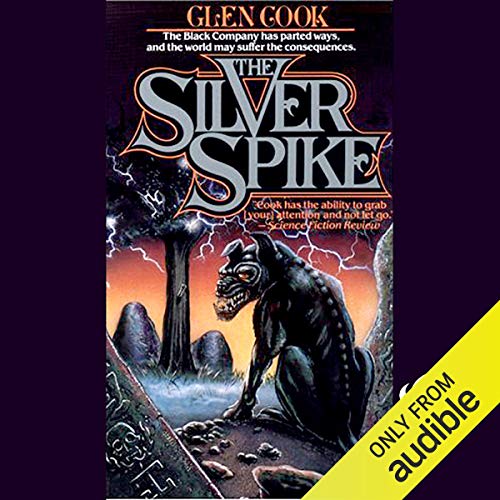 ....embedded in the trunk of the scion of the godtree, it contains the essence of the maddest of the Ten Who Were Taken...The Dominator.

Defeated by the Lady and cast from this world, all that was left of him was a foul trace of lingering evil. But the graveyard that was once the Barrowland contains more secrets than dead. All who would possess the power of the Dominator are drawn to the spike. A foolhardy band of thieves is the first to reach it, and a rapacious and malign spirit is unleashed on an unwary world. The forces gather, sides are drawn, and mortal men can only die as the Dark Lords battle for domination.

I just downloaded all the Glen Cook novels and am loving them. I'm a huge George RR Martin fan so I like the grittier side of fantasy. Jonathan Davis does a awesome job reading this one, even though Marc V., who read the first three was good, I just like Davis better, wish he read them all (especially the Rachel Butera fiasco).

More of a Side-quel... Read before Shadow Games...

I say side-quel because it takes place at the same time as the events of Shadow Games despite being listed as book 5 in the series. I actually listened to this one first based on some recommendations elsewhere online. After finishing both this and Shadow Games, I can definitely agree that this should probably be read first. Particularly because Shadow Games may leave you very much needing to know what happens next! Although both Shadow Games and The Silver Spike take place shortly after the events of The White Rose, only The Silver Spike is actually concerned with those events. So it just makes sense!

First off, the narrator has changed! Which sucks but is also okay, since Croaker isn't actually in this book at all. Jonathan Davis has a MUCH different feel. My brother and I both kept rotating between loving and hating him. He has a very comforting southern kind of charm that really puts you at ease. But then his performance could be very uneven. A few times I actually recoiled from the harshness of certain characters/lines. Most of the time however, he was very pleasant to listen to. He certainly breathed life into Case, a formerly unimportant and undeveloped side-character--now the new first person perspective into the story (though not really that important to it).

Moving on to story, this book continues with those characters who didn't follow Croaker. Namely; Darling, Raven, Silent, Case, along with a few new characters and a few returning surprises. But even though their story serves as the backdrop, its actually the new characters that are the most interesting this time around. Smeds Stahl in particular was one of the most fun characters i've read about in a while.

I found it very interesting/unusual how Glen Cook decided to tie up so many loose ends so quickly in this book. It almost seems like he was halfway through Shadow Games when he decided he just didn't have a time or place for any of these hanging plots/characters anymore, so he wrote this book just to close any possibility of seeing them down the line. At any rate, it certainly made the book more surprising, as I didn't expect what was supposed to be a spin off to have so much conclusion.

Best of the Series

I have to preface this by saying Croaker is awesome, and Mark Vietor was born to read the Black Company.

However, now that I have finished the entire series, I look back at this one as my favorite. Johnathan Davis does an excellent job as the narrator, and it is a worthwhile departure from Croaker's voice and tale. I liked the new characters (notably toad killer dog's POV), and the plot was concise and interesting. This did feel like a later insert (which it was chronologically), but it flowed with the overall arc well.

If you only read the Books of the North, and SS, that may be good enough. The Books of the South and especially Glittering Stone slow the plot waaaay down, and although you find out more history of the Company, they just aren't as good as these four ~10 hour books. The plot just flies by.

A masterwork of an end for te Northern Adventures!

Glen Cook slays again. While the first quarter or so was tedious to get though, the action following remained superbly gripping. A fitting end for quite a few cherished characters!

One of the best in the series, even if its technically skippable for Croaker's journey South. Dont miss it.

No spoilers coming from me
Rereading the series after 30 years. It is still exciting.

I like Glen Cooks previous books in this series, but this book is the worst.
Right off the bat it reads about a guy giving his “skin flute” to 11 & 12 year old sisters and later their mother blowing a mean skin flute. Really? Later, it talks about having sex with a 14 year old. SO DISGUSTING!!!!
And the audio reader’s over exaggeration is just too much. And finally, the story takes so long to develop. The story line of “Case” becomes SO tedious.

I’m so disappointed and will not be reading anymore GCook books about the Black Company.

First of all, I like Mr. Davis way more as Case than as Murgen. Even though he eventually comes into the latter role, his performance in this book is solid from the very start. Secondly, I didn't notice this book at first, and finished the whole main series before coming back to this. I was not disappointed. Another great story from Glen Cook, and one that satisfies my wonder for what was going on in the north as the Company headed south.

oh I wished the book wouldn't end. What a story. The Limper! Sheesh, I'm down to just the last sequel yet to be released. (Hope it's not the last Glen, Plz keep them coming.,)

The only way I can describe this series, the only way to do it justice, to give you a sense of the scope of the story is this: it's like reading a Vietnam War story set in a world of fantasy.

Great story, kept me engaged and wasn't too hard to follow while never coming I as over handed.