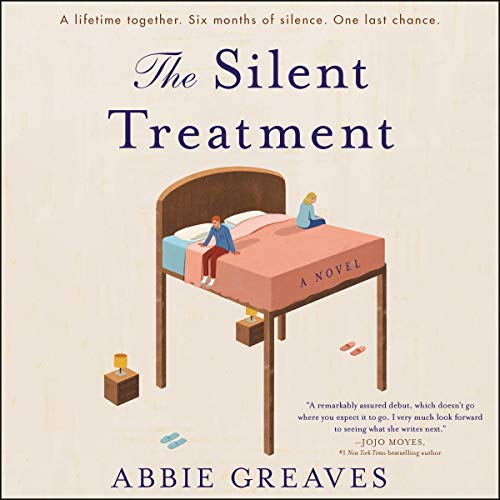 "A remarkably assured debut which doesn't go where you expect it to go. I very much look forward to seeing what she writes next." (Jojo Moyes, number one New York Times best-selling author)

"The premise alone had me, but The Silent Treatment itself is just heartrendingly lovely. It's beautiful, so moving and clever. I truly adored it." (Josie Silver, number one New York Times best-selling author of One Day in December)

Resonant with the emotional power of the best-selling novels of David Nicholls and Jojo Moyes, a rich and poignant debut about lies, loss, and a transcendent love at the heart of a troubled marriage.

By all appearances, Frank and Maggie share a happy, loving marriage. But for the past six months, they have not spoken. Not a sentence, not a single word. Maggie isn’t sure what, exactly, provoked Frank’s silence, though she has a few ideas.

Day after day, they have eaten meals together and slept in the same bed in an increasingly uncomfortable silence that has become, for Maggie, deafening.

Then Frank finds Maggie collapsed in the kitchen, unconscious, an empty package of sleeping pills on the table. Rushed to the hospital, she is placed in a medically induced coma while the doctors assess the damage.

If she regains consciousness, Maggie may never be the same. Though he is overwhelmed at the thought of losing his wife, will Frank be able to find his voice once again - and explain his withdrawal - or is it too late?

This sweet sad simple story of how the things we don’t say can shape our lives more then we want them to.

it is a page turner. though so sad a story. do read this one. do.

Needs to come with a major trigger warning

I rarely ever would give a book such low rating or bad review. This book had such promise. Could’ve gone in so many other directions. There were no twists as I had hoped. It was painfully sad the entire way through. I realize some stories need to be told, but this is just a sad, sad, sad story of parents losing their child to addiction, multiple suicide attempts, self harm, enabling behaviors, desperation, things unspoken, and lacking in any sense. What purpose does this book serve? It made me depressed for three days. I kept waiting for a twist to make it happier or even sinister. But nope it’s just a sad tale.

A Decent Listen With Caveats

A reasonably well-written book, and easy and fast listen, but there are things you might want to know beforehand that might help you decide whether to buy it and dive in.

First of all, it is not a happy listen, which you can learn from reading other reviews. It certainly might turn you off from having children if you are on the fence right now. Beware.

Secondly, it is really a story of an apparently happy couple raising a daughter late in life and their descent into hell through mostly no fault of their own. They just weren't prepared for what they got--you could say they were out of their depth and naive? They knew little to nothing about child rearing, nothing of co-dependency, and seemed to blame their age for having no one to ask for help. It seems that their friends had children years earlier, and Frank and Maggie were too embarrassed to ask. Really, who better to ask than someone who has already been through the trenches?

Our distraught couple seemed to have no one in their lives to share anything with, and we come to learn, they didn't share the most important things with each other, either. Who could keep such secrets!? And, we the listeners, wait with bated breath through endless hours of listening to find out their painful secrets, yes, til the very end of the book. The big reveal was not so shocking after all, sadly. However, it was quite understandable and I can only imagine, painful.

Please don't misunderstand me. I am not advising you to avoid this book. Just be aware of what you are in for. It was well done and the narration was fine. I'm just saying that if I knew more of what the book entailed, I might not have picked this particular audiobook to listen to at this particular time. 2020 has enough reality to make one depressed, you don't need your entertainment to do that, too.

Looking forward to more from this author!

Ms Greaves writes with a similar feel to Jojo Meyers and Fredrik Backman. I couldn’t stop listening I was so anxious for Frank to get out all his words!

Such a good book.

This was a really good book. It was very well written. I started reading this morning , and just couldn’t put it down till I finished it tonight. Kind of sad.

I read the reviews of The Silent Treatment and I thought it would make for an interesting read and a good story. I tried so many times to get into it, but I just couldn't.

Wife tries to kill herself and is in coma in hospital. Husband sits by her side and proceeds to explain their whole life story together. The narration is horribly boring as is the 'love story' which made me cringe.

I am getting this credit back. This book is bordering awful.

I was riveted when I started this book and soon felt I could hardly put it down.. I had to know what happened! However, it went on and on and on... I was waiting for the big reveal. It was sooo anticlimactic. We are hooked on the characters and then it fizzles and we have two adults suffering so much angst which goes on much too long. The book would have been much better were it edited better and shortened about 2 hours with at least.

I really wanted to like this book. I thought it would be about a communication breakdown in a marriage. Instead it was about two nitwits raising a brat who becomes an addict. Having read Beautiful Boy, the addiction scenes in this played out like a Lifetime movie - rote & not raising the slightest sympathy for any of the characters. The "confessions" when they come are so anticlimactic as to be laughable. I had an "I waited all this time for this predictable turn of events" reaction. The narrator did a good job & parts of it were well written. But the plot was so cookie cutter it was hard to get past that. And I found the title misleading. I thought it would be about 'the silent treatment.' Instead it was about two Brits acting so proper in the face of their monstrous offspring. Ugh. Exasperating.

I realize we all have different tastes in what we read, but for me, this was a work in monotone. It was unremitting, unrelenting, unremarkable melodrama from start to finish. Just a few characters, not well developed (again, monotone) and the plot was as contrived as a soap opera. I know other people loved this story, but as much as I tried, I didn't see the charm.