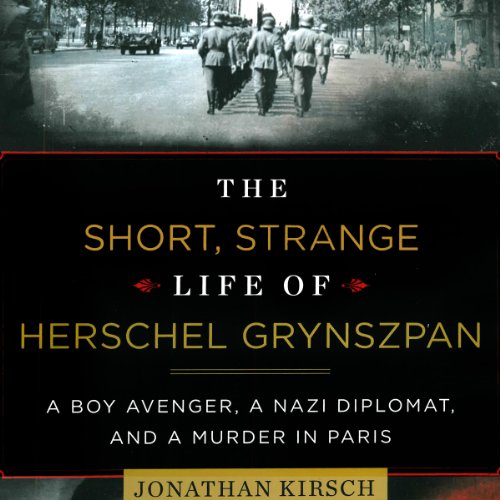 On the seventy-fifth anniversary of Kristallnacht comes this untold story of a teenager whose act of defiance would have dire international consequences.

On the morning of November 7, 1938, a seventeen-year-old Jewish refugee, Herschel Grynszpan, walked into the German embassy in Paris and in an act of desperation assassinated Ernst vom Rath, a low-level Nazi diplomat. He did it, he said, out “of love for my parents and for my people.” Two days later, vom Rath lay dead, and the Third Reich exploited his murder to inaugurate its long-planned campaign of terror against Germany’s Jewish citizens, in the mass pogrom that became known as Kristallnacht.

In a bizarre concatenation of events that would rapidly involve Ribbentrop, Goebbels, and Hitler himself, Grynszpan would become the centerpiece of a Nazi propaganda campaign that would later describe his actions as "the first shot of the Jewish War.

The author has a tendency to cover the same ground over and over. The Book would have benefited from a rather more thorough editing process.

Would you recommend The Short, Strange Life of Herschel Grynszpan to your friends? Why or why not?

Only to people with an interest in WW2 and the Holocaust.

Have you listened to any of Simon Prebble’s other performances before? How does this one compare?

The main reason I bought the Audiobook was that I like Mr. Prebble's narration.

Probably not. I don't think the story lends itself to film adaptation.

The story was interesting but could have been made a couple of hours shorter without losing anything.