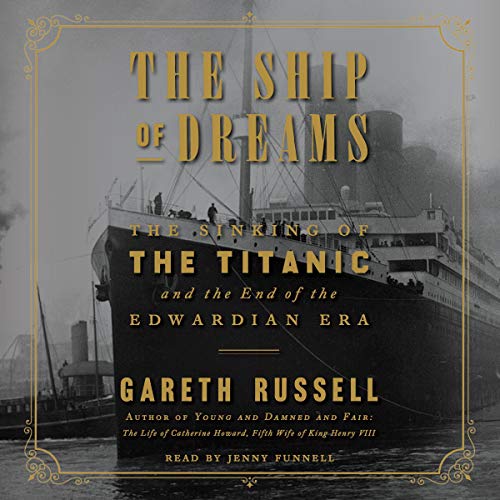 The Ship of Dreams

The Ship of Dreams

In this original and meticulously researched narrative history, the author of the “stunning” (The Sunday Times) Young and Damned and Fair uses the sinking of the Titanic as a prism through which to examine the end of the Edwardian era and the seismic shift modernity brought to the Anglo-American world.

In April 1912, six notable people were among those privileged to experience the height of luxury - first class passage on “the ship of dreams”, the RMS Titanic: Lucy Leslie, Countess of Rothes; son of the British Empire, Tommy Andrews; American captain of industry John Thayer and his son Jack; Jewish-American immigrant Ida Straus; and American model and movie star Dorothy Gibson. Within a week of setting sail, they were all caught up in the horrifying disaster of the Titanic’s sinking, one of the biggest news stories of the century. Today, we can see their stories and the Titanic’s voyage as the beginning of the end of the established hierarchy of the Edwardian era.

Writing in his elegant signature prose and using previously unpublished sources, deck plans, journal entries, and surviving artifacts, Gareth Russell peers through the portholes of these first-class travelers to immerse us in a time of unprecedented change in British and American history. Through their intertwining lives, he examines social, technological, political, and economic forces such as the nuances of the British class system, the explosion of competition in the shipping trade, the birth of the movie industry, the Irish Home Rule Crisis, and the Jewish-American immigrant experience while also recounting their intimate stories of bravery, tragedy, and selflessness.

Masterful in its superb grasp of the forces of history, gripping in its moment-by-moment account of the sinking, revelatory in discounting long-held myths, and lavishly illustrated with color and black and white photographs, this absorbing, accessible, and authoritative account of the Titanic’s life and death is destined to become the definitive book on the subject.

Gareth Russell manages to find a fresh perspective and an interesting focus for a much picked over subject. He writes well and succinctly, and at the same time breathes life into a fading past with vibrant anecdotes. Jenny Funnell's narration is the perfect compliment to the book. I enjoyed it so much I plan to listen to Russell's book Young & Damned & Fair: The Life of Catherine Howard - which is a subject I would not normally lean toward. As far as I am concerned Mr. Rusell and Ms. Funnell get full marks. Bravo.

I'm definitely a history buff and Titanic researcher. This is one of my favorite books on the TItanic disaster because it discusses in a good bit of detail some of the people involved, the time period, what was happening in history, some of the politics of the day, and how a lot of this all came together on one fateful night. If you're interested in a little more than the ship and how it sank, this might be one you'll enjoy.

A look at the era in which the titanic sailed

An interesting look at the Edwardian era, the lives of the people on board the ship and the aftermath of the sinking

Excellent on so many levels

This meticulously researched book not only is the definitive word on what happened that awful night, but is also a superb comment on the end of the Edwardian world that presaged the First World War... I was amazed at how much I learned, and how it held me in rapt attention.

Excellent Book on the Titanic

Excellent book on the Titanic and the era that she and her ship builders lived. I think the best part was actually the first half of the book in which the author describes the construction of the ship and the weeks and days leading up to the maiden (and only voyage) of the Titanic. In one sense, a prequel to the book "A Night to Remember" by Walter Lord. In that book, the author begins with the moment the ship struck the iceberg.