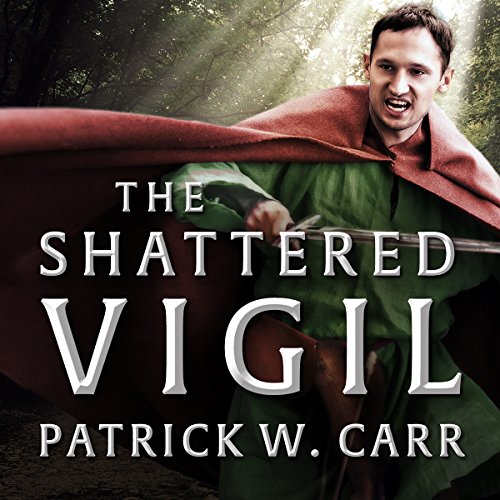 Victory over the dark forces during the feast of Bas-solas should have guaranteed safety for the continent. Instead, Willet and the rest of the Vigil discover they've been outsmarted by those seeking to unleash the evil that inhabits the Darkwater. Jorgen, the member of the Vigil assigned to Frayel, has gone missing, and new attacks have struck at the six kingdoms' ability to defend themselves.

Just when the Vigil thought they had quenched the menace from their enemy in Collum, a new threat emerges: assassins hunting the Vigil, men and women who cannot be seen until it's too late. The orders of the church and the rulers of the kingdoms, fearing the loss of the Vigil's members altogether, have decided to take them into protective custody to safeguard their gift. On Pellin's orders, the Vigil scatters, leaving Willet to be taken prisoner by the church in Bunard.

In the midst of this, Willet learns of the murder of an obscure nobleman's daughter by one of the unseen assassins. Now he must escape his imprisonment and brave the wrath of the church to find the killer in order to turn back this latest threat to the northern continent.

great narration , great book to get lost in can't wait for the next one

great story! enthralling! can't wait for the next one. Carr has real talent!

Nail-biting sequel to the Shock of Night

I was introduced to this series through a free e-book of the prequel, By Divine Right. I heard The Shock of Night via Audible and then had to listen to the sequel, The Shattered Vigil. This book has the same heroes as before, with a new villain.

Picking up after the slaughter of Bas Solas in Bunard, The Shattered Vigil finds Willet Dura and the rest of the Vigil trying to piece together how one of their own could have been turned against them. Just when they thought they had defeated their enemy, Willet and the others face a new threat—assassins they can’t even see. So they split up and start looking for the person who has been programming them to kill.

Recruiting four of the urchins—one for each of the surviving Vigil members—Pelen, Toria Deal, Braunwin, and Willet each follow whatever leads they can find to investigate the activities of the Clast, the disappearance of the Sentinels, the expansion of the Darkwater, and how so many people have been lured into its poisonous borders. While tracking down clues, they find that they, too, are being tracked. Lives are forever changed or lost, as they get closer to discovering the truth.

Patrick Carr is a masterful story teller. Although these books are pure fantasy, they contain elements of Christian truth. The series gives insight into the blend of human talent, temperament and gifting and how God chooses to intervene.

If you enjoy mystery, romance, intrigue, adventure and Christian themes wrapped up in a compelling fantasy, this is an excellent choice. Although the narrator’s raspy voice takes some getting used to, it’s definitely worth the investment of time and money to listen to this excellent tale!

I have listened to 2 of this series and read the last one (wish you would put it on audiobooks) a number of times now. it is one of my favorite. and although the last one is most informative, i this 2nd book is my favorite. the characters all have unique personalities that they have to live with. the interaction between them is what gives the books so much body. the humor and thoughtfulness which is used to overcome the themselves and the evil in their world is as much about the story.

It's no wheel of Time, but it is a satisfying story, building at a decent pace to give plenty of enjoyment over time. Some things happen a little too quickly, some a little too slowly, but overall a worthwhile continuation of the story. I've enjoyed Carr's other works, so if you have as well, you will probably like this.