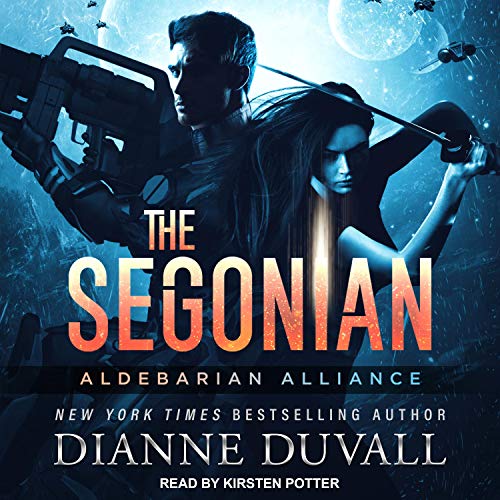 Eliana is hurtling through space on board a Lasaran battleship and getting to know not one but two alien races. It's the most exciting adventure of her long life...until the ship is unexpectedly attacked. Amid the chaos, she valiantly helps everyone she can before an explosion renders her unconscious. When Eliana awakens, she finds herself alone, floating in space, clad only in a spacesuit, with no ship in sight.

Commander Dagon and the crew of the Segonian battleship Ranasura respond to a distress call from their Lasaran allies and join a massive Alliance-wide search-and-rescue mission. He quickly achieves communication with a lone Earthling female and races toward her. Every time they speak, he becomes more desperate to reach her before her oxygen supply runs out. Her strength, bravery, and humor entice him, even more so when she defies all odds and they meet in person.

As he and Eliana embark upon a quest to find her missing friends, a bond swiftly grows between them. But they are not the only ones searching for Earthling survivors. When Eliana herself becomes the hunted and their enemies begin to close in, can the two of them fight their way to victory?

I love everything Dianne Duvall writes. Everything!! And this series is no exception. Eliana and Dagon are wonderful together. They are so sweet to each other and I love the crew of the Ranasura. The only thing that I do t like is having to wait for the next book.

I am pleased to say that I am absolutely over the moon for this book. Dianne Duvall hit it out of the park, and Kristen Potter did a wonderful job as Narrator.

Some how I just knew this book was going to be a delight and it truly was. My only regret is that I finished it all in one day and now I have to wait forever until the next one comes out.

This book had me laughing, smiling like a dope and friggin crying. Not even good crying either.....I'm talking full on UGLY CRYING!.

This book can have all my stars. All. Of. Them. On a good note? I'll definitely read this one over and over again!

Excellent book in this new series

As a fan of the Immortal Guardian series this series teased me even more. As a teen I sat and watch Star Trek in black and white. Always wishing I could be in the stars traveling this is another wonderful dream I wish I could be involved in. The characters are so real and even tactical views are well thought out. So many books are suppose to be star related but have no idea. This book makes sense to a old trekking.

I waited anxiously for this book and purchased it the day it was released only to get bored and put it down multiple times. The story dragged in some places but still contained all the elements we have come to love from this author’s stories. However, I wasn’t blown away, I don’t want to re-read it and will not rush to buy the next in the series. It was a decent story...good but unfortunately not great.

Eliana was first mentioned in the immortal guardian series and it is so nice to see her with her Segonian mate. I hope there are more books going to be issued in this series. It’s such an interesting concept to pull the guardians into deep space. This one has tension (the first part brought tears), then happiness and fun, then back to defense mode when the ship is attacked and lastly a rescue mission to retrieve Ava and meet yet another species in this new world. As always reading the book and listening to the story narrated by Nicole Poole is the perfect way to enjoy this story. Ms. Poole’s narration is perfection and as always only enhances this author’s story.

IG fans will not be disappointed here!
It was so cool to see a female IG find her HEA and Dianne made the transition from earth and vampires to deep space and aliens so seamless. I cannot wait too meet new characters and have new adventures!

I have loved every book I've read of Dianne Duvall's and they just keep getting better. The Segonian ROCKS! I couldn't put it down. I reread the Immortal Guardians and the Lasaran in the days before this book became available so I could enjoy the full saga. Ms Potter is stellar as always. As far as I'm concerned she is the only voice for Duvall books. Keep up the good work.

It’s ok - not as gripping as immortal guardian series

I am worried that perhaps Disnne is running out of storyline for immortals whereby she’s creating a spin-off series. The original series is so good, it’s hard to enjoy this book when your used to gripping storylines. It’s a book you’d listen to once, but probably won’t ever again. I replay her other series on repeat. Kirsten Potter delivers another exceptional performance. Love her!!

I have anticipated the release of this for sooo long!!! It was like catching up with old friends. LOVED IT!!!

Eliana and Dagon are wonderful characters and I loved their chemistry! I loved listening to their story unfolding! The narration by Kirsten Potter was as always superb! Dianne Duvall is a great author and I am amazed once again at her storytelling and world-building. She has a way of incorporating romance, action, comedy, and suspense into her writing. It makes for an amazing ride! I can't wait for the next book!