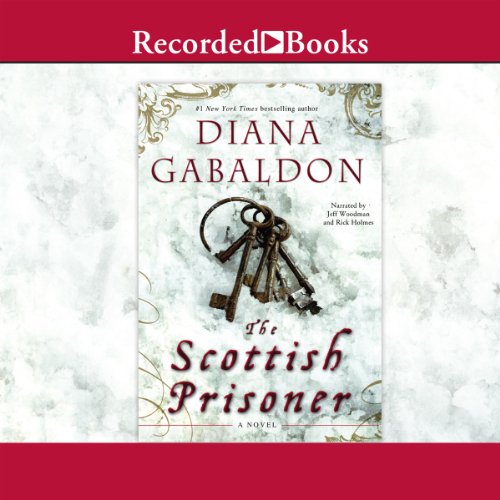 Fair Warning to those used to Davina Porter

Yes, It's a must have for Outlander fans. However, if you are used to Davina Porter's excellent narration, you might be better off getting this book in print.

What didn’t you like about Jeff Woodman and Rick Holmes ’s performance?

Jeff Woodman's narration of Lord John has always struck me as lacking in personality, but I can deal with him. Rick Holmes's performance of Jamie made me cringe every time he opened his mouth and butchered Jamie's lines. His accent was atrocious, his voice entirely too high pitched, and to make it even worse, he added an actual lisp (!) to Jamie's lovely Scottish accent. Whoever hired this guy as narrator should be fired.

To those who are die hard Outlander Series fans, you'll want and need the additional history of things Jamie did while Claire was gone. However, I advise you to save yourself the pain of this narration and get it in print form!

Stop me if you've heard this one before - An Englishman, a Scotsman, and an Irishman walk into a conspiracy...

If you haven't read "Lord John and the Custom of the Army" you might want to catch that first (from the Warriors anthology of short stories) to understand the full scope of the events that catapult Lord John Grey into a quest to bring a fellow soldier who committed atrocities in Canada during the Seven Years War to justice.

Even before his parolee, once and future friend Jamie Fraser, is pressed into helping him by his brother the duke, and the squirrelly Toby Quinn tags along as a guide, Grey knows that he's about to unearth a hornet's nest. When he stumbles across an old family rival, Twelvetrees, events take on a different twist and subtly begin spinning out of control, and in such a way that Grey, Fraser and Quinn won't realize until it's far too late that the price for the secrets they uncover will be paid in blood.

However, it takes a Jacobite to know a Jacobite, and Fraser, already full of distrust and misgivings, and harried by his old friend Quinn, finds himself walking a tightrope between helping the Greys and betraying old allegiances, until both men find themselves in the center of a political storm of conspiracy and betrayal.

Underneath it all, John Grey juggles his family and personal relationships, from the warmth of his relationship with Hal's family, Bird, Quarry and Von Namtzen, to the open hostility of Edward Twelvetrees, to the often fractious odd half-friendship with the suspicious Fraser. When that friendship goes wrong, it's horribly, horribly wrong, but when they recover the common ground that once made them friends, even as bittersweet as it is, it shines.

While the Lord John series can be read independently of the Outlander series where he is a "guest star", knowing the full story of why Jamie reacts the way he does is best learned from the first three (Outlander, Dragonfly in Amber, Voyager) of these novels. I always recommend reading the Lord John series in the correct order, since these novels and short stories build neatly upon one another. They are, in order:

While Gabaldon is more known for the heftier Outlander novels, Custom of the Army and Scottish Prisoner are an excellent read, and I kind of consider them a continuation of the same story. I would not be surprised to find these two works made into a movie.

What disappointed you about The Scottish Prisoner?

I'm a big fan of Davina Porter's narration of the Outlander series, so I expected a similar high quality from the Scottish Prisoner. I was apparently expecting too much. In the Scottish Prisoner, Jamie's accent doesn't even sound Scottish, let alone that of a Highland Scottish hero. They've managed to make Jamie sound like an effete bore from Ulster. It was so distracting that I couldn't finish listening to the audiobook, and I bought the hardcover instead. John Grey's voice isn't remarkable, but isn't bad.

If you don't know the difference between Belfast and Inverness, then this irritating distraction probably won't make much difference to you, but for me, Jamie's

Would you be willing to try another book from Diana Gabaldon? Why or why not?

Yes, I enjoy the Outlander series, and the Scottish Prisoner is a good transition between the two series.

Would you be willing to try another one of Jeff Woodman and Rick Holmes ’s performances?

Very disappointed in the choice of narrator for Jamie's parts.

I wish I'd waited to read the reviews before paying for this.

I find it interesting that they have used two narrators in the audiobook version; neither of whom can do a decent Scottish accent. It's almost embarrassing how bad they are. I was so looking forward to the release of this book, but I'm sad that I wasted a credit on the audio version. I bought the actual book and am glad of that because the story is great, filling in some details of Jamie's life after he sent Claire back to her own time. However, the narrators are so bad at Scottish and Irish accents (and, in the case of Rick Holmes, even an English accent) that it became very distracting and took away from my enjoyment in listening.
As usual Diana Gabaldon has outdone herself with this latest in the Lord John series. I have enjoyed all of her books in the series as well as the Outlander series. This book ties them together nicely and I highly recommend READING it. Don't waste your time with the audiobook.

Love story! Narration choices, not so much.

Where does The Scottish Prisoner rank among all the audiobooks you???ve listened to so far?

Very much enjoy Jeff Woodman's Lord John narrations as he is a great storyteller. Still, Davina Porter is the voice of these characters for me, and the main Outlander series books are my very favorites.

What aspect of Jeff Woodman and Rick Holmes ???s performance would you have changed?

I would have preferred Jeff Woodman do the entire book. It was too jarring to change narrators often, particularly because their main characters did not even sound similar. Jeff's Jamie has a very deep voice, where Rick's Jamie has a much higher pitched voice (not like Jamie at all in my opinion.) Their accents were completely different so it was difficult to tell who was speaking, particularly when Rick was narrating. Rick, unfortunately, did not meet my expectations, and I found myself switching over to reading the book during his parts.


Was this a book you wanted to listen to all in one sitting?

Either listen to or read in one sitting yes. But I did switch back and forth, as stated above.

Anything written by Diana Gabaldon is worth the time and money--every time.

I’m a huge fan of Diana Gabaldon in all her guises, and this melding of her Lord John and Outlander novels is irresistible for fans of either. I enjoyed having the story told in two voices, but frankly, the choice of Rick Holmes for the Jamie narration was a poor one. I imagine he’s a fine narrator for other material, but his voice is simply Not Jamie. I also question why all the Jamie sections weren’t narrated in a Scottish accent; after all, the point is that they’re from his (Scots) perspective. And, under no circumstances should he ever again do a child’s voice!

Jeff Woodman, on the other hand, did an outstanding job, as he always does with the Lord John books. I’m not especially crazy about his Jamie either, which lacks the warmth and humor that Davina Porter infuses into her Jamie voice, but he is the definitive John Grey and I was very happy listening to him.

I have read all of Diana Gabaldon's books and have longed for another. This book is a prequel to Voyager. I didn't even wait until the download of the second part was completed before I started listening. I hurt myself listening to this until 2AM two nights in a row and have no regrets. If you love or even like John Gray you will love this book. Though Claire is not in this story, her absence is a character itself. Throughout there is this thread of longing. It makes me want to read Voyager again.

better if done by different narrators

If you could sum up The Scottish Prisoner in three words, what would they be?

A great story from a different point of view, and more insight in to those lost years without Claire.

Would you listen to another book narrated by Jeff Woodman and Rick Holmes ?

I could not quite past the poor narration

they.. the narrators should have listened to Ms Porter's reading of any part of the Outlander series. This would have given them some in sight into what the readers would be expecting. It's a shame a good book was down graded by the reading. The narrator made Jamie seem like mindless Scott.
I just could not see the people in the story like I could with Ms Porter's reading of the original series. If you like this book you need to listen to the complete unabridge Outlander series with a GREAT narrator, Diana Porter.

I just LOVE this book! It is my favorite Lord John story yet and he is one of my most loved Outlander characters, plus there is lots of Jaime as well. It's one of those rare treasures that bears re

Up to Ms gabeldons standards

If you could sum up The Scottish Prisoner in three words, what would they be?

Enjoyed the book, but was put off by the Jamies terrible Scottish accent which sounded more Irish

Probably I am spoilt after listening to Davina Porter read the Outlander books but this was a little strange to have two narrators. And sorry guys but those are the worst Scottish accents I have ever heard. One was distinctly Irish! The story was great though.

I love Lord John and Jamie

i love lord john and jamie together. the history of their friendship is well told in this one. as ever with Diana Gabaldon before the background of history, crime and politics.

I doubt I'll listen to it ever again.

I really struggled to get through this one, which is surprising because I love Diana Gabaldon books (that said I wish so hard never to read or hear the words "felt rather than saw" again in my life. Omgoodness that's so over used in these books; it makes me physically cringe when I hear it). I have all of the outlander books in hard copy, kindle, and audio books. Same goes for this book. I have hard copy, Kindle, and audio book....but this is just about the worst thing I've ever put myself though.

Why on earth are there two readers? They change seemingly randomly. The accents they try to put on are absolutely God-awful. Depending on the reader the accents are radically different for the same characters which it makes it really difficult to follow.

Added to that they are so busy putting on an "ever so posh" accent for the in between bits that it's hard to understand simple things...I mean if you can't say off, coffee, lawn, or what (there are many other examples but off the top of my head hose words were the worst) in an understandable way should you even be reading an audio book?