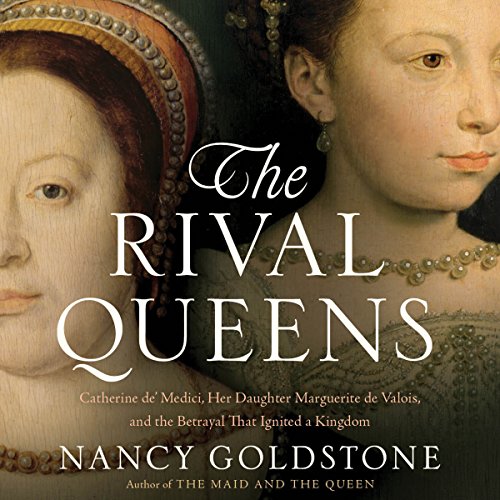 The riveting true story of mother-and-daughter queens Catherine de' Medici and Marguerite de Valois, whose wildly divergent personalities and turbulent relationship changed the shape of their tempestuous and dangerous century.

Set in magnificent Renaissance France, this is the story of two remarkable women, a mother and daughter driven into opposition by a terrible betrayal that threatened to destroy the realm.

Catherine de' Medici was a ruthless pragmatist and powerbroker who dominated the throne for 30 years. Her youngest daughter, Marguerite, the glamorous "Queen Margot," was a passionate free spirit, the only adversary whom her mother could neither intimidate nor control.

When Catherine forces the Catholic Marguerite to marry her Protestant cousin Henry of Navarre against her will and then uses her opulent Parisian wedding as a means of luring his followers to their deaths, she creates not only savage conflict within France but also a potent rival within her own family.

Rich in detail and vivid prose, Goldstone's narrative unfolds as a thrilling historical epic. Treacherous court politics, poisonings, inter-national espionage, and adultery form the background to a story that includes such celebrated figures as Elizabeth I; Mary, Queen of Scots; and Nostradamus. The Rival Queens is a dangerous tale of love, betrayal, ambition, and the true nature of courage, the echoes of which still resonate.

PLEASE NOTE: When you purchase this title, the accompanying reference material will be available in your My Library section along with the audio.
©2015 Nancy Goldstone (P)2015 Hachette Audio
Femmes Politique et activisme France Renaissance
Afficher plus Afficher moins

"With compelling storytelling, Goldstone colorfully weaves together the tales of these two women...whose powerful personalities and deep allegiance to France helped shape the country's future." ( Publishers Weekly)
"[Goldstone] spins a tangled tale of rivalry, ambition, and, especially - for the rare women leaders of the time - sheer self-preservation...Goldstone has a remarkable handle on these often Byzantine royal machinations. History brought to vivid life in the characters of these women of purpose." ( Kirkus Reviews)
"Attention, Game of Thrones fans: The most enjoyably sensational aspects of medieval politics - double-crosses, ambushes, bizarre personal obsessions, lunacy and naked self-interest - are in abundant evidence." (Laura Miller, Salon)

Definitely not a dull bio!

A fantastic look into 16th century French court life. The intrigues, manipulations, coercions, changing alliances, and reversals make for a larger than life historical story. The .pdf material was of great help in keeping up with the characters and events. Thoroughly enjoyed this book and recommend it to all who are interested in history, and there is romance, heartbreak, and tragedy in here, too.

Fascinating but not what I expected

Don't get me wrong, I enjoyed and appreciated learning about history from the point of view of two women since women's stories are far too often overlooked. However, from the description, I was expecting to read about the direct conflict between a mother and daughter who took on unprecedented leadership roles; this book is more a lesson about the 16th century religious conflict in France that happens to explore said conflict through the stories of two women who played key (but not necessarily definitive) roles. Since many of us are familiar with the religious conflict in England through the reigns of Henry VIII, Mary I, and Elizabeth I, it was certainly interesting to learn how the same struggle played out among their French contemporaries.

Loved this book that told the story's accurately yet did not get into gruesome detail.

The book was obviously meticulously researched. The characters are more interesting than if they were fictional. The events are fascinating...marriages, affairs, wars and religious upheavals, even a massacre. Unfortunately the author does not manage to conjure the same excitement with the Medici and the Valois that Alison Weir and Hilary Mantel do with the Tudors

The age during which this story takes place, the period of history itself, is extremely interesting. The two central characters are simply enthralling; it is a shame that Catherine de Medici does not quite come to life in this book. Queen Margot fairs a little better.

What aspect of Suzanne Toren’s performance would you have changed?

Somehow I found her tone pompous. She did not add anything to the characters. I did not particularly like her reding.

I would definitely go see any movie about Margaret de Valois and Catherine De Medici; everything necessary for a great script is in this book...if the script writer could only add the spark

The Medici Family is a favorite study of mine and this book does a spectacular job at bringing Catherine de Medici and her family to life. Well done and highly recommended!

No - The book appeared very well researched and narration was good. I was just bored with subject matter. I wished the book had more of analysis of the impact of Catherine de Medici and Margo's decisions on the average frenchman of the time. This book reduces the women and the their family members into narcissistic and egotistic people. There doesn't seem to be any substance to their characters as they would in real life. This is just my opinion but I couldn't finish this book!

I loved this book. it was well written and very informative and engaging. I didn't know much about Margaret de Medici before. the narrator is one of the best I've heard so far.

I did not even bother to finish this.

This is not a book I would recommend for pleasure reading. I eat non-fiction histories for breakfast, but this one seemed to go on and on about nothing. Sadly, I lost all interest in what happened to both queens and found no one admirable in the entire book. Catherine was an appalling character, and while Marguerite should have been fascinating, the author seemed to grind to a halt about halfway through. I never do this, but realized I didn't care one bit what happened to either of these women and didn't finish the book.

What was most disappointing about Nancy Goldstone’s story?

It was extremely repetitive and I found nothing to admire in any of the characters. According the the author, Marguerite was a fascinating character, but It's not enough to just tell the readers that; the author was unable to translate Marguerite's appeal onto the page.

Which character – as performed by Suzanne Toren – was your favorite?

Do you think The Rival Queens needs a follow-up book? Why or why not?

I enjoyed hearing the French names and places beautifully pronounced, but that was about it.

I liked the history aspects but the book is hard to digest as an audio book. Is well-researched and read but doesn't grip the reader.

Did Suzanne Toren do a good job differentiating all the characters? How?

The book was not written to really allow for different character dialogues but rather was written as an historical novel, not an historical interpretation.

Was The Rival Queens worth the listening time?