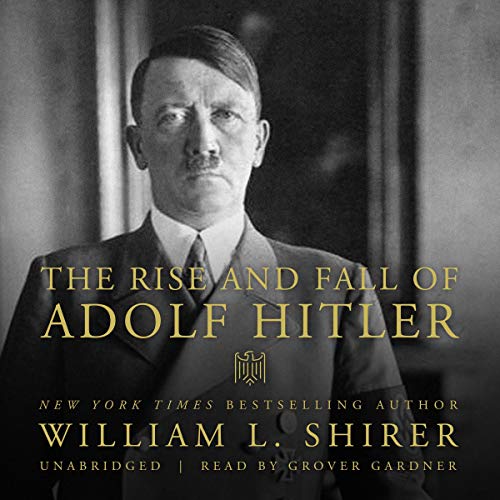 The Rise and Fall of Adolf Hitler

American journalist and author William L. Shirer was a war correspondent for six years in Nazi Germany, having a front-row seat to Hitler’s rise in influence and power. His most definitive work on the subject, The Rise and Fall of the Third Reich, is a riveting account of life in the tyrannical state, a country transformed by war and dictatorship.

The author was originally commissioned to write The Rise and Fall of Adolf Hitler for a young adult audience. This account loses none of the immediacy of The Rise and Fall of the Third Reich - capturing Hitler’s prominence in public cognizance, the horror of mass killings, and the paranoia and insanity that marked the führer’s downfall. This book is by no means simplified - and is sure to appeal to anybody with an interest in World War II history.

Grover Gardner is the BEST narrator on Audible. I have listened to him again and again on books written by William Shirer and others. This latest book was on Hitler was phenomenal.

Although very brief and incomplete, and certainly not the best bio on Hitler (rec Toland), Shirer's books are well worth the investment. There's nothing like getting it from the guy who was there, especially when that guy was a sophisticated writer. And then having it narrated by Gardner! Wunderbar!!

Great to the point book that only William Shirer could write. Such are sorely missed today.

Thank you for bring this book to life. Perhaps if it was longer it would not have been as good.
Thank you so much!!!!

one of the best autobiographies

William L. Shirer is a go to for all WW2 Journalism. Great review of events.

Great review of historical events. Shirers books are great. This is a great book to start with.