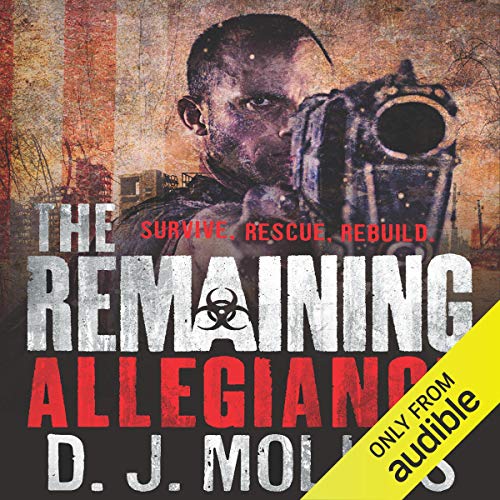 This is the fifth novel in the action-packed series following Special Forces Captain Lee Harden and a group of survivors struggling to make their way in a ruined world. After a bacterium has turned 90 percent of the population into a ravenous horde, Lee must complete his mission: SURVIVE, RESCUE, REBUILD.

When I read the first Remaining book, I almost stopped there. It was bleak and gritty and didn't seem like there was ever going to be any sunshine , ever... But something about the extreme bleakness, the way the zombie apocalypse wore down the protagonist, Lee, how the other humans interacted, that felt more real than most of the genre, and I've read a LOT of zombie books, i'm slightly embarrassed to say. This is no Mark Tufo reluctant hero who saves the ones he loves story, this is a story of loss, betrayal, survival, politics, and of course, zombies....

This series is great even though zombies

I am burnt out on zombie tales. It is not that I don't like them, but there are just so many everywhere. I started this series after a recommendation, and I thought it was a post apocalyptic story, which it is, but did not know the cause of the apocalypse was the dreaded zombies. So I rolled my eyes expecting the same story under different covers, but it surprised me.

While this story is not high literature it is fun. The characters are done well enough that you care for them, and the zombies are used to move the human interaction and plot along. The zombies are used sparingly. It also gives you a plausible feel of how government and military evolve after a situation like this.

As for this particular book? It was good. It felt so very short, but it was over 14 hours in length so I think that describes the pace of the story.

I am not a big fan of the cliffhanger serial. I want my story to be fully complete. There can still be a great deal to do in the author's universe without resorting to the old cliffhanger serial technique, but I guess if it keeps bringing the readers in and keeps the series going I don't mind that much.

After reading the previous books in this series, I started this ine several days ago. I'm now nearly 4 hours into it and nothing has happened!!! I give up. Uncle.

The series began with such promise but now appears to be completely devoid of ideas and just relentlessly grinds and whines over nothing.

Sadly, I wasted a credit.

I will be waiting impatiently for the final book..

We D.J. make dang sure all his readers will buy the 6th and final book. The story was another brilliant continuation the remaining series. Although the cliffhanger at the end was just mean lol.

I was disappointed. This book just seemed like a bunch of "filler" material for the story. no interesting plot lines like the other books. it seemed like a throwaway episode like Lost or The Walking Dead. But since I have the other 4 I had to listen to it, right? but I could have probably skipped it and picked up the next book and be up to speed.

What made the experience of listening to The Remaining: Allegiance the most enjoyable?

The narrative of this series is awesome. The voices are all distinct and easy to recognize.

Have you listened to any of Christian Rummel’s other performances before? How does this one compare?

I love listening to this entire series. I can't think of any other narrator who could do this book as good as Christian Rummel.

I love this series. The book is amazing and It keeps me riveted to the plot and I can't stop listening. More please!!!!

This series has fallen off a cliff

What disappointed you about The Remaining: Allegiance?

First a disclaimer ... I read all of the other books in this series, and this is the first one in the series that I listened to. I LOVED the first books because they had a pace that was fast, but still allowed for us to get to know the characters. Then came the Novellas, which were a waste of time. I found this book to be slow, repetitive, and boring ... and the narration of the little kids and female characters was just creepy. I think this whole book was a waste of time. Not much happened expect for a lot of whining and internal thinking.

What could D.J. Molles have done to make this a more enjoyable book for you?

Mr. Molles should have ended this series before the novellas. I just get the feeling he has run out of stream or just can't think of anything else to write.

Would you be willing to try another one of Christian Rummel’s performances?

Boy, good question. I didn't like the narration at all, but much of it had to do with the poor writing. But even then, I found the hysterics of the narration to be irritating.

If you could play editor, what scene or scenes would you have cut from The Remaining: Allegiance?

You could have cut out 50% of the document and it wouldn't have made any difference. Too much talking, too much thinking, too much planning. For the most part there were no zombies in this book. Isn't that strange?

If you go look at my reviews, I gave the first couple of books 5 stars. I loved those books. I found this book to be a complete waste of time.

Anyone who gave this 5 stars had to have overlooked how bad this book because of the quality of the first books, or they have to be friends, paid reviewers, or employees of the publishing company. This was just bad. Don't let 5 star reviews fool you.

The book and performance of this book was really good. I can't wait for the next one.

It ends where it should begin...

Excellent novel keeps you entertained as well as intrigued. As a fan of the series I was ready for more well ready for more things to go well for the characters instead I got more struggle which is true to the story I'm ready for the next novel. Both the author and narrator were excellent you will enjoy the story if you're a fan of the series is not a bad place to begin. I look forward to the next installment and the ending will keep you on edge your seat.