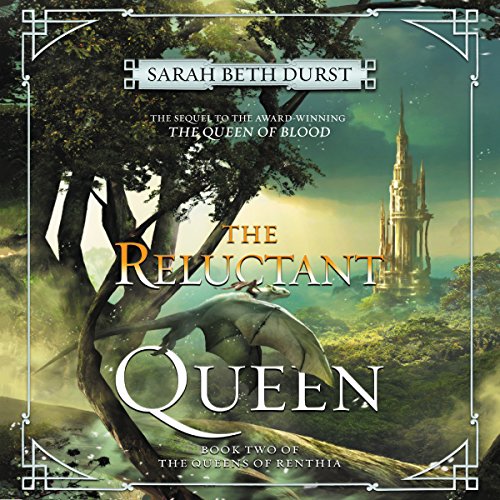 Everything has a spirit: the willow tree with leaves that kiss the pond, the stream that feeds the river, the wind that exhales fresh snow.

And those spirits want to kill you.

It's the first lesson that every Renthian learns.

Not long ago, Daleina used her strength and skill to survive those spirits and assume the royal throne. Since then, the new queen has kept the peace and protected the humans of her land. But now for all her power, she is hiding a terrible secret: She is dying. And if she leaves the world before a new heir is ready, the spirits that inhabit her beloved realm will run wild, destroying her cities and slaughtering her people.

Naelin is one such person, and she couldn't be further removed from the queen - and she wouldn't have it any other way. Her world is her two children, her husband, and the remote village tucked deep in the forest that is her home, and that's all she needs. But when Ven, the queen's champion, passes through the village, Naelin's ambitious husband proudly tells him of his wife's ability to control spirits - magic that Naelin fervently denies. She knows that if the truth of her abilities is known, it will bring only death and separation from those she loves.

But Ven has a single task: to find the best possible candidate to protect the people of Aratay. He did it once when he discovered Daleina, and he's certain he's done it again. Yet for all his appeals to duty, Naelin is a mother, and she knows her duty is to her children first and foremost. Only as the queen's power begins to wane and the spirits become emboldened - even as ominous rumors trickle down from the north - does she realize that the best way to keep her son and daughter safe is to risk everything.

Sarah Beth Durst established a place of dark wonder in The Queen of Blood, and now the stakes are even higher as the threat to the queen and her people grows both from within and beyond the borders of Aratay in this riveting second novel of the Queens of Renthia series.

Some might say predictable or overly dramatic but I enjoyed it a lot! S. B. Durst's universe is unlike any other and you grow to like her characters as they evolve while the story unfolds. I do think I have a preference for book 1, but it's almost always that way in book series, isn't it?
K. Hvam performance is great as in book 1, she brings the characters to life quite nicely!

decent story, drawn out too much

the world seeing of Renthia is delightfully unique. Ms. Durst has a good sense for interesting stories. Unfortunately, she falls Pery to the "I'm so clever I bet you didn't see this coming" fallacy.

By the time the culprit is revealed I had been screaming in frustration for chapters about them. It became quite obvious well before we learn about the murders, therefore drawing out the " mystery" became tedious.

As did the constant relative introspection. Introspection is well and good, but when the same things are repeated, sometimes verbatim, sometimes in slightly different ways... It losses its effectiveness. A little would have gone far further.

Too much time spent on one mystery

it was a long belabored mystery about a poisoning and very little adventure, just didn't love this installment but now feel I should listen to the next one since this one was not fully resolved. hoping for better in the next book.

Amazing! Glad I invested my time into this series and can't wait for the next book.

I enjoyed this book in audible format. The narrator did a good job of sounding different voices. This book has Queen Darlana fighting a poisonous disease and the Queen from the next country at the same time. The ending leads to several surprises and several beginnings to future books.

Sarah Beth Durst's beautiful but deadly world of fairies and magic is engrossing -- her women are central to the story, strong and complex without marginalizing or sidelining male characters. Even so, as this 'balance' doesn't always work in real life, so it is with Renthia. Sometimes things happen that are nobody's fault, sometimes they are. Life and relationships between the human aspects in these books flourishes in all its chaotic glory, like blooming vines around a crumbling tower.

I'm sure the written books are delightful to read but SBD's colorful, vibrant world and characters are so perfectly translated by Khristine Hvam's evocative narration that it's hard to imagine experiencing this series any other way.

Looking forward to the next installment, hoping for many more works by this author and this voice actor.

These are turning out to be some of my favorite books! The first book,takes a couple chapters to get into, but then you never want them to end!