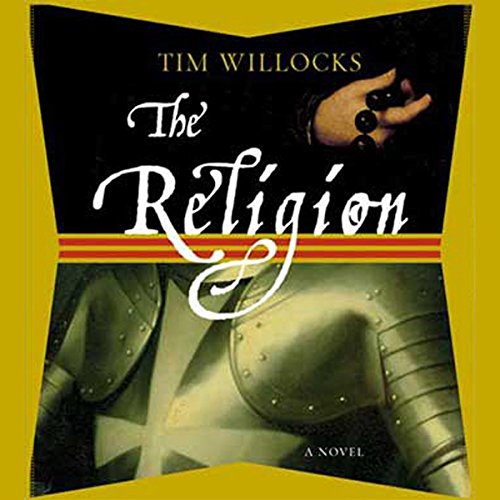 May 1565. Suleiman the Magnificent, emperor of the Ottomans, has declared a jihad against the Knights of Saint John the Baptist. The largest armada of all time approaches the Knights' Christian stronghold on the island of Malta. The Turks know the Knights as the "The Hounds of Hell." The Knights call themselves "The Religion."

In Messina, Sicily, a French countess, Carla la Penautier, seeks a passage to Malta in a quest to find the son taken from her at his birth 12 years ago. The only man with the expertise and daring to help her is a Rabelaisian soldier of fortune, arms dealer, former janissary, and strapping Saxon adventurer by the name of Mattias Tannhauser. He agrees to accompany the lady to Malta, where, amidst the most spectacular siege in military history, they must try to find the boy - whose name they do not know and whose face they have never seen - and pluck him from the jaws of Holy War.

The Religion is Book One of The Tannhauser Triology, and from the first page of this epic account of the last great medieval conflict between East and West, it is clear we are in the hands of a master. Not since James Clavell has a novelist so powerfully and assuredly plunged readers headlong into another place and time. Anne Rice transformed the vampire novel.

Again history is brought to readers in all its reality.

The story of how the extraordinary Maltese fought alongside the massively outnumbered defenders of the Christian world against the first Jihads. They managed to push back the Ottoman invasion and save Europe.

Malta is also a must visit to understand the dynamics lasting centuries. It is a beautiful place.

From the very start of this story, I was drawn into it so completely, I didn't want to stop. The history and horror of the time is vivid and passionate. If you enjoy Historical Novels and Simon Vance reads beautifully, you will enjoy this piece. I hope there will be a follow up on this novel.

Willocks doesn't believe in using one word when four will do, but his story of soldier of fortune Mattias Tannhauser and his adventures on Malta during the great siege will capture the listener. Simon Vance delivers an extraordinary reading. Looking forward to Volume 2, as this is supposed to be a trilogy.

This is an interesting, adventure story that exposed me to a period in history I had not previously explored. I agree with previous reviewers that character development is somewhat lacking and I found the "love scenes" to be quite unimaginative, despite the detail. Like others, I too tired of the overly long and gory battle scenes. I understand that this is the first book of a trilogy and I hope that future volumes are a bit more fully realized and not so bloody.

Rich tapestry is a much used phrase, maybe overused; however The Religion is definitely a rich tapestry. The characters are alive. I cared about them. They wove themselves and their situations into my waking hours -- and some of my dreams. Vivid! Alive! The story was whole, a tale, a spoken ballad to be sung again and again. Unlike many books who tell a story to get to the end - the climax; this book lives, has a past, present, and future. It allows for a full range of emotions to be experienced and treasured. Thank you, Tim.

One hell of a bloody yarn!

If you're looking for an intriguing 20+ hours of audiobook entertainment, then you can't go wrong with this beast. As others have said, it's bloody beyond compare. There were times during this audiobook when I actually started to giggle at the unparalleled gruesomeness of the confrontations and battles. Not because it was funny by any means but more the result of some built-in self-defense mechanism on my part. While I was taken aback at first by the level of violence, I began to realize that swords, axes, and countless other weapons of antiquity did exactly what's described in this story. Namely, well... you'll "see" for yourself. Good for Willocks to not hold back, in my opinion.

I really enjoy good historical fiction, and this definitely is. The amount of research that must have gone into the writing of this book is impressive. I was so intrigued by the historical details and references in this story that I did a little research of my own, just enough to appreciate it more on the second listen. One hell of a good story, not to mention the always wonderful narration by Simon Vance. Can't go wrong with a credit on this one, it's a pure rip snorter.

WOW! I could not take the headphones off. Fantastic story which the narrator brings to life. Very graphic battles and aftermath, definitely not for the faint of heart or squeamish. A superb story with fantastic history interwoven. Makes you wonder how we humans have made it this far.

I loved this book from start to finish. Great characters and character development. I can't wait for the sequel. If you like this book you might also like George Martin's a book of fire and ice.

gripping but shallow & too graphic

First, this is a "page turner." It is a very gripping book and the narration is excellent. That said, the book has two flaws which make it something of a one time read rather than a book that I will return to again.
1)My first criticism is a little superficial: This is without exception, the most graphic book I have ever read. I am not by any stretch of the imagination either a prude or squeamish (I am a eight year veteran of the Army and have seen my fair share of blood and have never thought of myself as the least bit puritanical) however the incredibly evocative descriptions of wounds, torture (much of it done by the protagonists), murder, rape, violence of all stripes, and battle border upon the sick and the amount of very explicit sexual descriptions passed the merely titillating and verge on the pornographic. What made this particularly notable is that it is repeated to the point of tedium. An occasional graphic scene is not a problem, the problem here was that it was repeated over and over and over. Again, this is from a person who has never had a negative reaction in his life to a graphic bit of writing. This is however, a relatively superficial criticism, if you can get past the massive overdose of explicit sex and violence.
2) More damning are the inconsistencies in the plot and the rather weak to non-existent character development. Oddly enough, whenever there is any character development it is so abrupt or so out of character as too be annoying. Unfortunately, I cannot explain this in more detail without giving away points of the plot.
In sum, this book is gripping and a great fun read but its quality was severely reduced by shoddy character development and a dozens of frankly overly graphic scenes.
FYI I strongly advise the book Empires of the Sea on Audible which covers (non-fiction) the siege of Malta very well.

not for the squeamish

I love historical fiction and I found this to be artfully written, brilliantly performed and extremely entertaining. It is quite violent and certainly not for the faint of heart. Warning: it's the first book of a trilogy and I have not been able to locate the second book on audio and the third book is supposedly being written now (2015).

Like your history to come alive? Get this book!

I have listened to several other selections about the battle of Malta and liked them all, but this one stands out as my favorite due to the varied backgrounds of the colorful characters that fill this book. The writing brings the history to life in an interesting and suspenseful manner that kept me listening intently. Wonderful ending and a great narrator.

This book is highly underrated, the story writing style is much better than Ken Folletts or Rebecca Gable’s books